Regarded as a cultural powerhouse, the city is also well-known for hosting a plethora of festivals ranging from one of Scandinavia’s largest cultural events ‘Aarhus Festival‘ (which celebrates its 50th birthday this year), Aarhus Food Festival showcasing the best from Danish and Nordic breeders, growers and chefs, to the colourful Moesgård Viking Moot – a pageantry of costumed participants bringing early Aarhus to life.

Deservedly set to be the European Capital of Culture in 2017 with its theme of “Rethink”, it offers a thought-provoking and exciting range of attractions and activities with versatile appeal.

1. Walk through a rainbow at ARoS
One of the city’s key cultural attractions is the impressive ARoS Aarhus Art Museum, an architectural highlight that houses an important collection of paintings, sculptures and installations of international repute. Crowned with an amazing roof top installation by the Danish-Icelandic artist Olafur Eliasson, ‘Your rainbow panorama’ takes the form of a circular, 150m-long walkway made of brightly-coloured glass panels. Walking around the installation, visitors can experience 360° views of the city in all colours of the spectrum. 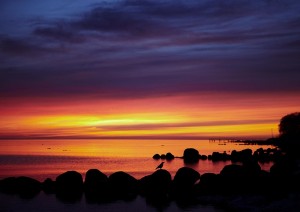 2. Step back in time at Den Gamle By
Den Gamle By (‘The Old Town’) is an award-winning attraction where visitors can walk through time and experience life during three time periods – 1800s, 1920s and 1970s. Initially founded in 1909 as the world’s first open-air museum of urban history and culture, it comprises a stunning collection of authentic Danish buildings that have been painstakingly restored and furnished to replicate each period. Exploring the half timbered houses, old-style stores, gardens and workshops, visitors can step back to the days of the famous Danish author, Hans Christian Andersen, or venture to the 1927 quarter, described as the ‘Modern Town’, to see the affects of industrialisation with electric lighting, petrol pumps and telephone wires appearing amongst the newer styled houses. Leaping forward 50 years, a stroll down the 1970’s shopping street reveals ‘Poul’s Radio and TV Shop’ with its retro electronic stock of TVs, radio sets, reel to reel tape recorders and records, a perfectly ‘dated’ pastry shop where you can grab a coffee and there is even a gynaecologist’s clinic. Complemented by costumed staff living out the various roles, it offers a realistic engagement with another time.

3. Discover Denmark’s fascinating history at the new Moesgaard Museum
Moesgaard Museum, Aarhus’s dedicated centre for archaeology and ethnography, is opening a new architecturally striking landmark that will offer a fresh perspective on Danish history, from the Stone Age to the Middle Ages, including displays of some of Denmark’s most important artefacts such as the ‘Grauballe Man’. Designed by Henning Larsen Architects to embody the form of a natural mound with white stone lines and a grass roof, the museum will be equally innovative inside, mixing state-of-the-art technology with fascinating backdrops and dramatised storytelling, to bring many of its ancient exhibits to life. Set in South Aarhus surrounded by tranquil woods with sweeping views out to the sea, the museum grounds will also offer a location from which to enjoy the Danish countryside. The museum is scheduled to open on 11 October 2014. 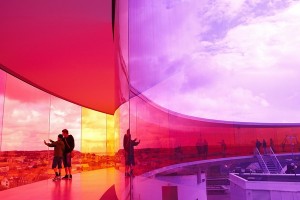 4. Amuse yourself at Tivoli Friheden
Attractively located close to woodland and water, Tivoli Friheden (‘Freedom’) amusement park has been one of Aarhus’s favourite attractions for residents and visitors alike for over 60 years. Retaining the notion of old fashioned fun, the park offers a selection of over 25 thrilling modern rides in a magical carnival setting. Open throughout the day and into the evening, it has become a popular concert venue for many of Denmark’s leading bands and offers ‘period’ dining in the beautifully restored Restaurant Terrassen and pavilion that were built in 1904. It also opened a new 800 seat theatre ‘Hermans’ in 2013, which will be the venue for Aarhus Festival’s riotous ‘International Natcabaret Moulin de Paris’ from 30 August to 6 September this year.

5. Stroll through the Botanical Gardens
A green oasis of rolling hills just to the west of Den Gamle By in the centre of Aarhus, the Botanical Gardens is one of the oldest parks in the city. Originally started as an experimental garden in 1873, it contains a vast collection of plants. Divided into specialist sections and themed areas, these include different habitats found throughout Denmark, a medicinal garden, a valley of flowers, a rose garden, a rockery and notable collection of trees and bushes. Amongst its many delights are the original palm and tropical greenhouses (which are currently undergoing restoration and due to reopen in September 2014), and a new 18 metre high domed hothouse where visitors can meander among the treetops of a tropical forest. With a lake and the gentle Hessel Brook, a small outlet of Aarhus Stream Valley, running through its heart, it makes a tranquil city escape.

6. Watch the changing of the guard at Marselisborg Slot
Built in the late 19th century as a “wedding gift from the people” to King Christian X and Queen Alexandrine, grandparents of Queen Margrethe II, Marselisborg Palace is the summer residence of the Royal family. During this time, when the Royal family is in residence, the Changing of the Guard by the Life Guard takes place at noon every day. Whilst there, also take time to explore the extensive gardens. Dotted with sculptures (including three magnificent giant granite lions that were given to Queen Margrethe II from the city for her 70th birthday), they also contain the Queen’s rose garden and herb garden.

7. Cycle like a Dane and get in touch with nature
Flanked by pristine beach, vast woodland and natural oases, Aarhus offers plenty of opportunities to get back to nature. With cycling an integral part of the Danish lifestyle, picking up a bike and taking one of the well-marked cycle trails offers a rewarding way of exploring a little further afield. For an excellent day out, take the 17 km return coastal route stretching south through the Marselisborg Forest to Moesgård beach. Cycling on forest paths and cycle tracks in the soft shadow of old beech trees, stop at the Marselisborg Deer Park to get up close with Sika and Fallow deer, whilst possibly catching a glimpse of the wild boar which were traditionally hunted in the area; then head to Ballehage Beach for a refreshing dip in the sea before continuing into Skåde Forest and on towards Fruens Bænk for great views along the coastline and out to Samsø island; venture on through the forest to one of Denmark’s most popular beaches Strandskoven before arriving at Moesgård Museum to take in the Vikings; finally head over to Skovmøllen, an idyllic old thatched watermill to relax over a spot of delicious gourmet fare before cycling back.

8. Lie on the beach in view of ‘The Iceberg’
Aarhus Ø is a brand new ‘town’ that has arisen out of the expansion of the waterfront. With a charming canal, it is also home to one of the city’s most striking buildings ‘The Iceberg‘ – a uniquely angular housing development, which has been designed to take in the sea views whilst reflecting the natural beauty of an iceberg, how it breaks up and floats across the sea’s surface, capturing light. Following a walk around the complex, take a break at Strandbaren – the Beach Bar – a new area with a captivating beach vibe where you can lie on the beach, chill out on HAY furniture with a cocktail, go for a sail or join in one of the many group activities such as volleyball, zumba, salsa and yoga.

9. Immerse yourself in creativity at Godsbanen
Thoughtfully redeveloped from buildings that used to house one of Denmark’s largest train freight yards, Godsbanen is the new ‘cultural production centre’ in Aarhus. A melting pot of creativity with open workshops, studios, project rooms, theatre stages, auditoriums and dance halls, Godsbanen offers a rich array of performing, literary and visual arts. With a gigantic ship prow shaped roof, offering ‘titanic’ views over the rooftops, it provides the city with a drama all of its own.

10. Make up your own gallery trail
Exploring Aarhus’s many and varied small galleries and handicraft workshops is a great way of discovering some of the city’s hidden gems whilst uncovering a wealth of local artistic talent. Near ARoS in the beautifully restored `Børnely` building, visit GalleriV58 for a diverse showcase of Danish and International art or head over to Vestergade to the recently established Lunchmoney Gallery to view up-and-coming contemporary art. For face to face encounters with glass-blowers, ceramicists, goldsmiths and horn ware makers, drop into Nr4 Kunsthåndværk, Stenholt Glas, and Hornvarefabrikken and pick up their wares. Adding to the city’s wealth of great shopping, numerous small designer shops such as 1+1 Textil, Designertorvet and Designer Zoo make for a treasure trove trail.

Where to stay…
Aarhus has an excellent selection of accommodation with two new recently opened hotels – the 240 room 4-star hotel Comwell Aarhus which opened 1st July 2014 and has been superbly decorated from head to toe by the popular Danish designer HAY and the centrally located Hotel Scandic Aarhus City which opened in 2012. Other well-located stylish options include the Radisson Blu Scandinavia Hotel Aarhus, Hotel Ritz Aarhus City and City Hotel Oasia Aarhus.

For additional information on Aarhus, visit www.visitaarhus.com or for more details on Denmark. www.visitdenmark.co.uk