Here I am in Havana, Cuba standing next to a statuesque likeness of Ernest Hemingway, enjoying the American author’s favorite cocktail in his renowned El Floridita drinking haunt… bucket list item number 7 duly ticked off.

The Cuba that Hemingway gravitated to for the high life in the 30s and 40s, especially in Havana, still rumbles on today. The sounds of ancient Chevrolets, Buicks and Plymouths that flash past in a range of vivid reds, pale blues, purple, deep green, yellows and pinks, complement the pallor of the architecture.

Cubans are poor (some items still remain rationed) but already there are signs that the communist ethos appears to be softening with pockets of free enterprise springing up.

The most evident are family-run restaurants (the paladares) tucked away in side streets and serving excellent seafood, meat and traditional Cuban/Spanish dishes. 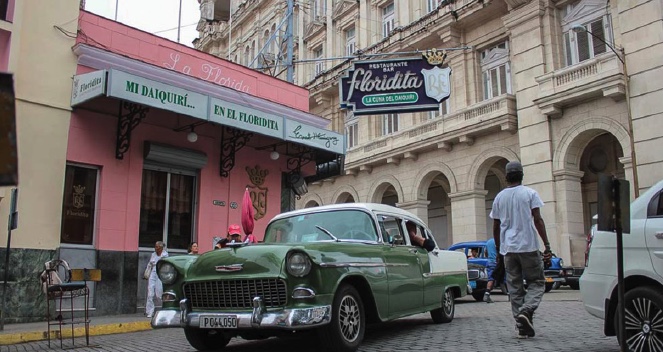 Our first taste of Cuba, like many others, was the airport taxi transfer to our hotel in Havana and, much to our surprise, it was in a yellow coloured modern day Fiat. Our hotel was classed as 5 Star which I must say did surprise me as parts did live up to that status, but they still had a long way to go to match other parts of the world. Some aspects like training their staff to meet guest requirements and the concept of charging back to your room were a mystery to them.

We had a full day of sightseeing in Havana with the Morro-Cabañas fortress. A walking tour of the Old Havana City historic centre, where the backdrop is of broad boulevards, narrow cobbled streets and flaking Spanish colonial buildings whose pastel shades of washed blues and greens, or jaded yellows, appear to enhance charm rather than define their age. Once you step off the main track into the shaded sidewalks and alleys you find the true Habaneros hanging out of windows and chatting amid the decaying Spanish architecture and that gives Havana its identity.

Next day was a full day tour to Vinales Valley in Pinar del Rio, Cuba’s most western province where they say the world’s best tobacco is grown. We visit a Cigar factory in Candelaria, where each cigar is handmade and quality control is a man checking every single cigar as it goes by. This is how each person is paid…by the number that make it past him.

Next was a visit to “El Paraíso” farm, where we got to see the lifestyle of local peasants as well as learn about the growing of tobacco and the hardships along with this. In Viñales, visit the Pre-historic Mural (cave painting on the country’s most ancient rocks) and the Vinales, a valley that reminded me a bit like the hinterlands of Queensland. We viewed the prehistoric wall and Indian caves, where we boated along its underground river. 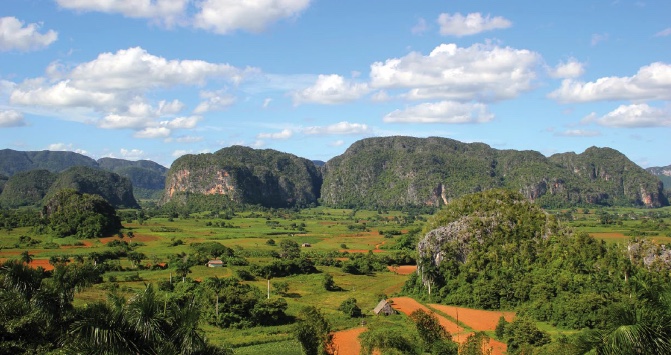 After driving across the island from Havana, on the Caribbean coastline, we found Trinidad. En route, we travelled along deserted highways, pass farmers drying rice on the side of the road, horses and carts trotting past, rusting Soviet-era tractors and plantations of mango, pineapple, guava and oranges. We also made a detour to the Bay of Pigs to visit the revolution museum, which is mostly about Fidel Castro and his freedom fighters, before  a pause at Cienfuegos, a beautiful coastal town with a magnificent central square. A quick visit to a crocodile farm, something I would never have thought I would find in Cuba, and finally arriving in Trinidad…a town described as “having everything – music, culture, history, museums and beaches”.

If Havana is where time has slowed, the clock has virtually stopped in laid-back Trinidad. Sitting between mountains and the coast, with its wealth built on sugar cane two centuries ago, it is now thriving again as visitors drift in for the ambience, the atmosphere, the culture or simply for the music.

Trinidad is centred around Plaza Mayor, the cathedral and Cantero Palace, now the city museum. Its squat tower offers views over red-tiled rooftops set against mountains  and the tropical landscape that was once the heart o Cuba’s sugar plantations. The bar, La Canchanchara, takesits name from the drink sugar plantation slaves brewed after toiling through the long hot days. Made of honey,lemon, water, sugar cane alcohol and ice, it is potent, full of flavour and traditionally drunk from small earthenware pots. 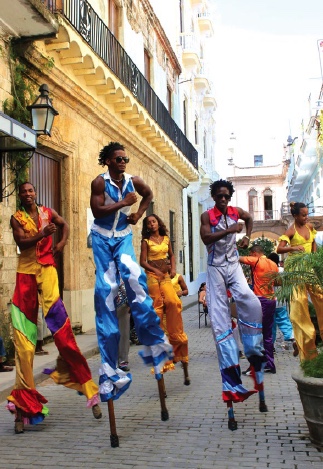 With three-wheeled cycle taxis and horse-drawn carts the only transport in the older quarters, you can amble around Trinidad taking in galleries, museums and small shops, pausing for a coffee, glass of Cristal beer or a cocktail or simply enjoy the timeless Spanish colonial architecture of a town which, like much of Cuba, remains freeze-framed in a different age.

In Santa Clara you’ll find a semi-religious monument, mausoleum and museum in honour of Ernesto ‘Che’ Guevara. Che’s statue was erected to mark the 30th anniversary of his murder in Bolivia in 1967. Fidel Castro lit the eternal flame in October 1997. In the adjacent museum you find a large number of Che photographs, guns, letters, medical equipment and a rare late picture of Che shorn and looking uncannily like Brando in The Godfather.

Our final place was Varadero, which is a resort town in the province of Matanzas and one of the largest resort areas in the Caribbean. This is where you will find 13 miles of beach with powder soft sands lapped by waters of the Kawama Channel, a great place to relax at the end of your holiday.