Text and images by Rob McFarland

Chile’s capital tends to get a bad rap when compared to other South American cities. It might not have Rio’s party atmosphere or Buenos Aires’ style but it’s certainly got enough sights and attractions to justify hanging around for a few days.

It’s also the main gateway to the country and if you’re coming to Chile the chances are you’ll be passing through Santiago. So before you go dashing off south to trek in Patagonia or north to explore the Atacama Desert, take a few days to live life like a Santiaguino.

Many of Santiago’s main attractions are crammed into the oldest part of the city known as Centro, which is best explored on foot. Start at the Mercado Central Market to check out the enthusiastic seafood vendors before strolling down towards the city’s main square, Plaza de Armas. Flanked by the impressive Metropolitana Cathedral on one side and the National History Museum on the other, it’s a busy, people-watching paradise full of tourists, artists and engravers.

Nearby is arguably the city’s best museum, the Chilean Museum of Pre-Columbian Art. Inside you’ll find beautiful displays of artworks and artifacts plus some surprising facts about the region’s different cultures. Everyone’s heard of the Incas but did you know that the Chinchorro culture was mummifying their dead 2,000 years before the Egyptians? Or that Amazonian Shamans used wooden vomiting spatulas to cleanse themselves before taking hallucinatory drugs?

From here it’s just a couple of blocks to the imposing Presidential Palace and its army of smartly-dressed rifle-bearing guards. Despite what the guide books tell you, it’s no longer possible to go inside, but it is worth timing your visit to coincide with the “changing-of-the-guard” ceremony at 10am each day.

Ignore the ubiquitous stray dogs and graffiti as you walk a few blocks along the impressively-named Avenue Libertador General Bernardo O-Higgins because the reward is an oasis of peace in the middle of the city. Santa Lucia Hill is a set of beautifully landscaped gardens where meandering paths climb past impressive Romanesque water fountains towards a summit with sweeping views over the city.

Santiago has a reputation for being smoggy and from here you can clearly – or not so clearly, depending on the day – see the two sets of mountains responsible: the Andes on one side and the coastal cordillera on the other.

Head north from Santa Lucia and you’ll eventually hit the Parque Forestal, a lovely Parisian-style park with meandering gravel paths and shaded benches. The latter are particularly popular with amorous teenagers whose PDA’s (Public Displays of Affection) contrasts with Chile’s reserved reputation as the “England of South America”.

If you’re keen to head further afield it’s worth investing in a ticket for the bright red, hop-on/hop-off Turistik bus service. As the name suggests, it is a bit touristy but it allows you to see a lot in a day and it has commentary in English. Buses run every 30 minutes and there are stops near all the main attractions.

For an even more impressive view of the city, take the funicular to the top of Cerro San Cristobel and join the tourists and nuns around the 22-metre high statue of the Blessed Virgin Mary. There’s also a two kilometre long cable car (called the Teleférico) which has similarly inspiring panorama.

Five years ago the suburb of Bellavista, north-east of Centro, had a decidedly dodgy reputation. Since then cafés, restaurants and bars have moved in, transforming the area from an unsavoury backwater into the most vibrant district in the city. The icing on the cake was the opening of Santiago’s first boutique hotel, The Aubrey, in March 2010. Painstakingly converted over a four-year period from a private residence into a luxury hotel, its 15 rooms are a stylish mismatch of antique furniture and modern amenities. Throw in one of the city’s best eateries and a decadent Mediterranean-style outdoor pool and it’s easy to see why it’s garnered such rave reviews.

If your budget won’t stretch that far or you’d like to be closer to Centro, check out the Andes Hostel in the Bellas Artes neighbourhood. It has a range of accommodation options from four-person dorms through to doubles with private bathrooms. It’s a step up from a backpackers and it has a funky communal area with a bar and pool table. 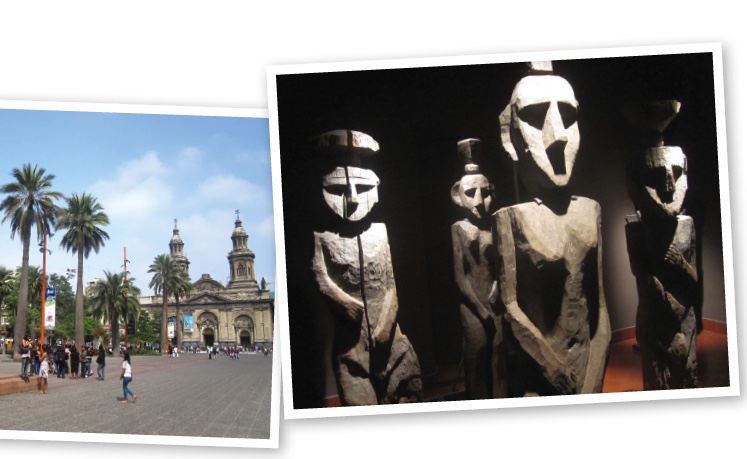 If you want a traditional taste of Chile, make a B-line for Liguria. This Santiago institution serves up hearty dishes of Chilean favourites such as smoked short rib with mashed artichoke and blood sausage with spicy mashed potatoes. You can sit at the bar and eat tapas style or try and nab a table in the smokey, dimly-lit, wood-panelled restaurant. It’s as popular with locals as it is with tourists, so it’s worth booking ahead.

A great spot for lunch with a side order of people-watching is El Toro, which has two branches – one in Providencia and another in Bellavista. You might not recognise the Chilean singers and soap stars that come here to chow down on its enormous sandwiches and salads, but that’ll just make you seem even cooler.

Pasta e Vino started in the coastal port of Valparaiso and is credited with launching the city’s gourmet revolution. Its winning combination of flavoursome pasta dishes washed down with fine Chilean wine whipped reviewers into a frenzy. The good news is you can now have the same experience in Santiago. A sister restaurant has opened within the Aubrey Hotel and offers a similarly indulgent menu served in a gorgeous floodlit courtyard.

For food on the go, you’ve got lots of choices. There are the usual fast food chains but for something more traditional, try an empanada – a pastry filled with assorted fillings such as meat, potato and olives, or if you’re feeling brave, tackle a ‘Completo’ – a monstrous hot dog crammed full of avocado, tomatoes, pickles and lettuce and then smothered with mayo, mustard and ketchup…yum!!!

Want to party like a South American? Then head to Bellavista. Although don’t do what I did and go there on a Saturday night at 7pm. Most people haven’t even started eating by then and they won’t be hitting the bars and clubs until midnight. Most of the nightlife is concentrated around two streets: Constitucion and Pio Nono and they have very different feels. On Constitucion you’ll find a collection of stylish wine bars with impressive cocktail lists, intimate lighting and live music. Pio Nono, on the other hand, is where the students go out, so brace yourself for tattered plastic chairs, dangerously cheap beer and a rowdier atmosphere.

If you’re based near Centro, The Clinic is worth a look near Andes Hostel in Bellas Artes. It’s a popular spot which transforms from a lively restaurant to a bar and club later on.

In terms of what to drink, Pisco sour – a potent mix of grape brandy, lime and sugar – is many Santiaguinos’ tipple of choice (even if there’s fierce debate as to whether it originated here or in neighbouring Peru). For an added kick, mix it with Coca-Cola to make a Piscola, although be warned your hangover will last for days. Another bizarre but popular concoction is Fanschop – half beer, half Fanta – which tastes better than it actually sounds.

Unfortunately, getting a decent hangover-curing coffee in Santiago is nigh-on impossible. Chileans drink a lot of coffee and it’s almost always instant Nescafe. If you want to take your mind off the taste, try a “coffee with legs”, where the coffee is served by scantily-clad girls in a nightclub-like atmosphere behind blackened windows. There are hundreds of these establishments scattered throughout the city and they’re mostly frequented by suit-wearing businessmen during the day. It was possibly the most awkward ten minutes of my life. 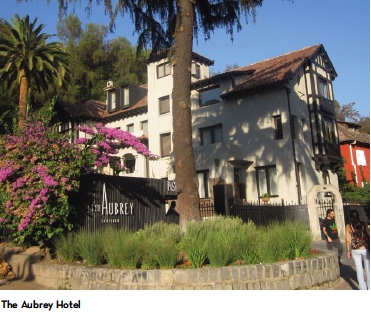 Getting there: LAN airlines has daily flights from Auckland to Santiago

The writer was a guest of LAN and The Aubrey Hotel

Niue – MORE THAN A ROCK