A Caribbean cruise had always been on my bucket list and this year I got to tick it off with a seven day round trip from Miami…visiting Jamaica, Cayman Islands, Mexico & The Bahamas.

Our ship, the MSC Divina, is one of four in the Fantasia Class and has the MSC Yacht Club onboard. This offers the passenger access to a world of special privileges. Our cabin was an ocean view with a port hole and had a good sized double bed. The cabin had a bathroom with shower, interactive TV, telephone, cable, internet connection (for a fee), mini bar and a safe. On arrival at the terminal our bags were whisked away by the porters.

Our cabin was located mid ships, on level 8. It had good access to the lifts and stairs. Levels 5-7 were the heart of the ship where we found shops, restaurants, bars, theatre, lounges, reception and the shore excursion office. Levels 8-13 were mostly cabins. Levels 14-18 we found the pools, spa, more lounges & bars, cafeterias, kids area, sports centre and the Yacht Club area.

All food, drinks and related services not included in the cruise price can be paid at the end of the cruise or you can purchase various packages when booking or on-board. We opted for a voucher system whereby you got 15 vouchers to use for most things and could buy more if required. This works well as you’re never quite sure how much you will (or won’t) do. 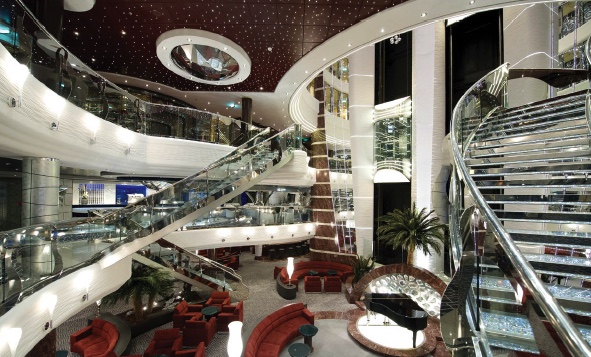 We had two main dinner sittings…7pm & 8.45pm, or the buffet on Level 14. We opted for 8.45pm, which allowed us to attend each evening’s spectacular International show, have pre-dinner drinks and then dinner. Our table was for 8 people, 2 English, 2 Americans and, believe it or not, 4 New Zealanders. You had a choice of 7 difference courses with 2 choices from each course and that was before the desserts.

We had two days at sea and the rest were ports of call. First port of call was Falmouth (Jamaica). We docked at the main wharf area. Our shore excursion was rafting on the main (Martha Brae) local river. While driving to the departure point we went through various small towns and it reminded me a bit like being in Fiji…the scenery and villages are similar. Once there we boarded a raft made from about 8-10 bamboo poles roped together with a seat for 2 people and a person with a pole to guide you down the river.

It took about 3 ½ hours and the guide gave us a rundown on various plant/animal life on the river and general information about life in Jamaica, plus everything he knew about the New Zealand cricket team.

The next day was a ½ day sightseeing tour in George Town (Cayman Islands). The ship’s tenders were used here. As the Caymans is a tax free haven there are something like 500 international banks located here and it shows with the types of shops, homes, buildings etc. Our tour took us out to the main beach (Seven Mile beach), a Sea Turtle farm (the only one of its kind in the world) where they breed turtles for release (some weighing up to 600 lbs) but some were sold to local restaurants to stop poaching. We were even able to hand feed them, which was a first for us. 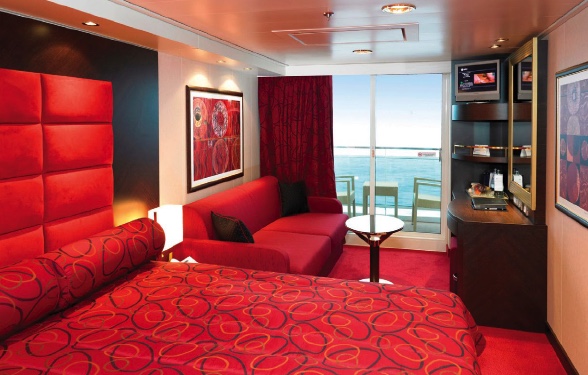 At a dolphin aquarium (a chance to have a photo with a dolphin) then onto a Tortuga Rum Cake Factory, before making our way to Hell. This hilariously named Cayman town is the perfect spot to send postcards from, aptly postmarked “Mailed from Hell”, and you will earn the right to state that you’ve “been to Hell and back”.

The next day was Cozumel, a island off the Mexican coast, next to Cancun. As we were going to Cancun we had a look around the shops and a drink in the local bar. The rest of the time we made full use the faclilities on the ship.

Finally, our last day was supposed to be a beach day at Great Stirrup Cay (Bahamas), but due to inclement weather we woke to find ourselves in Nassau, the capital, along with 4 other cruise ships. You can imagine the amount of people that were all trying to get off the ships and do local sightseeing tours. We decided to go ashore and do our own thing, with a local taxi driver, who took us on a sightseeing tour of the city to view this beautifully preserved city. With its Victorian mansions, cathedrals, 18th-century fortresses and Queen’s Staircase (the 66 steps lead to a breathtaking panoramic view) and casinos Nassau is a great place to visit.

If you’re fond of titbits for your next dinner party, you’ll be interested to know that Nassau has featured prominently in cultural history, often being used as the setting for Bond films, as well as Flipper and Into the Blue.

Make Your Next Vacation the Most Memorable Ever