Words and images by Shane Boocock

To be honest, I’m not really into cruise ships that carry 2,000 or more passengers, although there are exceptions, and this cruise to Papua New Guinea was one of them. Imagine a country with over 800 distinct languages, 850 different cultures and thousands of different traditions.

The country lies entirely within the tropics, just south of the equator and 160 km north of Australia, encompassing the eastern part of New Guinea Island – the second largest island in the world plus some 600 other islands, atolls and coral reefs.

As the Pacific Dawn smoothly cruised down the Brisbane River and out into Moreton Bay a Vegas-like party atmosphere kicked into action on the Lido Pool Deck. Live music and the sound of children splashing and frolicking in the kids only swimming pool was interrupted only by the clicking of cocktail glasses as guests toasted the first day of their well-earned holiday break.

The first two days and the last two days are at sea but that’s when Pacific Dawn’s on-board entertainment and activities are hard to miss, as they are limitless, from live music shows, pub trivia, craft demonstrations, kids games, dance classes, spa sessions, as well as karaoke and bingo sessions to special themed evening events. There is definitely something for all the family including pre-teens and teens, so the kids won’t miss out because this ship is geared up to keeping them occupied during daylight and evening hours.

Our first port of call was Alotau, the capital of Papua New Guinea’s Milne Bay Province, a place steeped in history, rich in culture and blessed with natural beauty. It is also the gateway to some of the most remote island communities remaining in the world today, a place that is enriched with age-old cultures and traditions. The area claims its fame in the history books due to the WWII Battle of Milne Bay, which took place here in 1942. It was the first time in the Pacific that Australia and the Allies beat back the Japanese offensive.

As we walked the gangplank on to dry land it began raining. The wharf was deserted as a group of us headed through town in a shuttle bus towards the island’s cultural centre, where a range of ethnic tribes were performing elaborate ceremonial dances to the beat of tribal drums. In a no frills environment by the water’s edge, each tribe, wearing unique ceremonial costumes went through different routines from the very young to much older tribal elders who smiled with betel juice stained teeth. The show is predictably laid on for tourists but lapped up by all the cruise passengers. 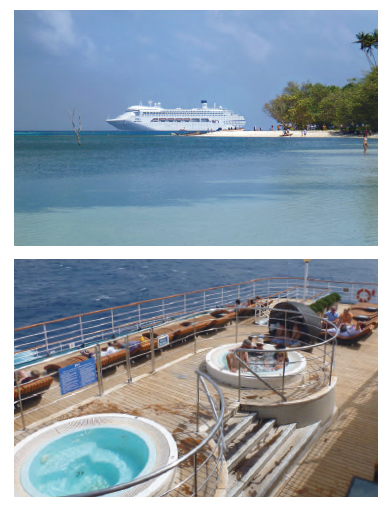 Preferring to walk back to the ship, I left my group and wandered along Alotau’s main street fronting the harbour where a soccer tournament was being held. In the adjoining area of land, I stepped into the muddy paths that divided the town’s market stalls where root vegetables and produce were being sold, laid out on pieces of plastic or hessian sacks. It was a great way to meet the friendly locals who often smiled and said hello – a common trait throughout the Papua New Guinea islands.

After sailing overnight we dropped anchor off Kitava the next morning. It’s the most easterly island of the Trobiand Islands, part of Milne Bay Province. Kitava is where one of the world’s most intact island cultures resides on one of the world’s most untouched islands. Here life remains, as it was thousands of years ago with very little external influence.

It seemed like most of the population of 3,000 on this 20 square kilometre island turned up to meet us off the wharf where the tenders from the ship docked. It was obvious that with no electricity, no televisions nor internet that links to the outside world were all but none existent, so naturally the indigenous population included hundreds of healthy young children, more often sitting with their parents in the shade of coconut palms selling carvings, trinkets and woven baskets.

At the water’s edge outrigger canoes, that looked like they could sink at any minute, were pieced together with driftwood. Each canoe had four or five paddlers and a helmsman but a few also had makeshift colourful sails from a patchwork of different fabrics and tarps. Their job was to ferry cruise passengers for a nominal fee across a small channel with a fierce current to the circular sandy atoll of stunning Nuratu Island.

Scientists have claimed that the diet of Kitava Island is one of the last places on earth where dietary habits from the original inhabitants are virtually unchanged. Their diet, consisting of root vegetables, tropical fruit, fish and coconuts, is said to be one of the healthiest on the planet.

By 8.00 am the next day the ship’s Italian Captain had docked  in the port of Rabaul. Located on Papua New Guinea’s north-eastern tip, this province – blessed with natural beauty but plagued with an unlucky past – has literally risen from the ashes. The former capital of New Britain is a town with a colourful history and no stranger to rebuilding itself from the ground up, as it has been destroyed by volcanic eruptions in 1937 and more recently in 1994, as well as being obliterated by aerial bombardment in WWII.

Shore excursions are all part of cruising and there is the option of pre-paid tours or you can just leave the ship independently and find a taxi or shuttle bus and negotiate the fare to where you want to go. It often helps to find another like-minded couple to share these costs.

I opted for a 3.5 hour War and Colonial History Tour to soak up some of the areas turbulent past. First stop was the Bita Paka War Cemetery, home to over 1,000 graves for Australians and their Allies who died defending Rabul from the Japanese during WWII. The well-tended gardens and cemetery was a glowing tribute to those who fought and lost their lives, sadly many grave markers indicated, ‘Serviceman Unknown’. Then it was on to the town of Kokopo, built 20 km from Rabaul in the aftermath of the 1994 eruption. Here lies the Kokopo War & Cultural Museum, where a ramshackle collection of Japanese WWII historical photographs, artefacts, relics, vehicles and weapons are rusting away as they lie exposed to the sea breezes around the museum’s grounds. 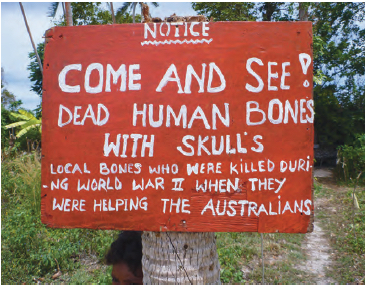 In one of the buildings there is even one side of the nose cone of a B-17 bomber with a scantily clad painting of a lady and the words “Naughty & Nice”.

Our final stop was to visit an amazing engineering feat, that of the fortified Japanese barge tunnels, part of over 300 miles of underground pathways designed to conceal munitions stores, hospitals and more. It obviously wasn’t safe to venture too far inside, but the short excursion was enough to understand what it must have been like to build them.

Shortly before sunset we cruised past the destructive Mt. Vulcan, the volcano where the eruption began on September 18, 1994. After less than a day of intense seismicity here it was, still simmering with steam rising from it’s vents in 2015 – the prevailing wind howling down the harbour straight towards Rabaul – the same wind direction that carried all the volcanic debris from the eruption that left a layer of ash across the town to the height of a car. Not that everybody on board however were looking toward the dark cone as some people were already on their second cocktail, reclining in a beach chair or splashing about in one of two hot tubs on the Aft Deck of the ship.

On another glorious sunny day we anchored off Kiriwina Island back in Milne Bay Province. Here is one of the world’s most intact cultures, and by far the most populous of the Trobiand Islands with an estimated 12,000 inhabitants. It is home to one of the most colourful and fascinating cultures on earth. In this matrilineal society, women enjoy a higher status than men, pigs are an indicator of wealth and foreign visitors like me are referred to as dim-dims.

Once ashore I made my way along Kiriwina’s sandy beaches through throngs of islanders, sitting either side of the pathways shading themselves from the sun with umbrellas or by palm trees. They were selling everything from Trobiand walking sticks, wooden bowls and facemasks to necklaces and colourful sarongs. In certain  spots on the beach a single fish was hanging from a tree limb. A local, named Jimmy, told me they acted like an advertising sign – it was a place where islanders were smoking then selling dogtooth tuna and sandpaper fish over red-hot coals.

Doini Island was our last stop on this cruise of Papua New Guinea, located 870 km due east from the tip of Australia’s Cape York Peninsula. It is listed as a privately owned island of just one square kilometre, an all-but-lost tropical island with just a handful of locals, a= small resort and an airstrip – the sort of place that deserves a ‘deserted island’ status.

Most of the island is uncharted but it is known that it was originally a burial island and still has a number of skull caves in hard-to-find places.

Surrounded by pearly white beaches and azure blue waters this was the perfect place to take the snorkelling gear for one final dip to check out the coral and tropical fish, before the Pacific Dawn sailed back through the Coral Sea to Queensland. 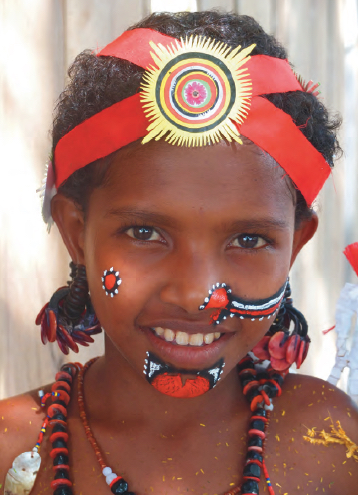 All Decked Out: P&O’s Pacific Dawn is a cruise ship suited to all age groups but especially families with children as well as a much older clientele. Remember it’s important to pick and choose carefully which P&O cruise ship suits you and your family the best, and what sort of itinerary and destinations the vessel might be visiting. Also knowing what is included is vitally important, so you can budget accordingly – do your homework and it will make your holiday all the more enjoyable.

On board there are two  all-inclusive restaurants, the buffet only Plantation and the fine-dining Waterfront, both are open for breakfast, lunch and dinner. Salt by Luke Mangan is a 75 seat, fine-dining restaurant that is open only at night-time and the cost is not included in the price of your cruise ticket. Likewise the Luna Restaurant is a ‘pay as you dine’ restaurant. There is also the Grill, the Café and the Lido Pool Bar on the Lido Deck, and one of the most popular spots on board is Charlie’s Café & Bar in the Atrium. Add in the Mix Cocktail Bar, the Orient ‘Karaoke’ Bar and The Promenade ‘Piano’ Bar along with the Marquee Theatre, all located on Deck 7 and you’ll never be lost for a seat. Finally there is also the Oasis Bar on Aft Deck 10 that is an adults only area.