Rome is a cinematic city; you only have to browse its souvenir shops for seconds and you’ll come across endless reproduced images of Audrey Hepburn riding a Vespa in Roman Holiday and Anita Ekberg smouldering in La Dolce Vita. Even now, decades after the films, dedicated fans still flock to the real-life locations when they visit, whilst modern filmmakers such as Woody Allen still choose the city as their backdrop.

The Spanish Steps
When making the recent movie To Rome with Love, even Woody Allen couldn’t keep away from the charm of the Spanish Steps, allowing love-struck tourist Hayley (Alison Pill) to enjoy the view. This is also the setting for one of the cleverest scenes in the 90s thriller The Talented Mr. Ripley, where Meredith (Cate Blanchett) meets Ripley (Matt Damon), who is concealing his identity.

Walking down the steps is something of a rite of passage for many visitors, who are drawn to the picture-perfect scenes from the top, and the bustling shopping streets that tail off from the piazza at the bottom. The Keats-Shelley Memorial House can also be found here, to the right of the steps as you face them from below; this was where poet John Keats lived, hoping that the warm climate might help his poor health. Keats is yet another example of figures from the arts being drawn to Rome, which has been something of a hub for poets, artists and writers as well as filmmakers. 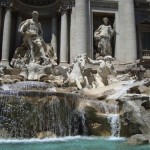 The Trevi Fountain
This fountain is best known for being the backdrop to La Dolce Vita’s most famous scene, where Sylvia (Anita Ekberg) wades into the water at night, with Marcello (Marcello Mastroianni). Whilst you can’t jump into the fountain in tribute – that is, unless you want to be arrested – it would be unthinkable to visit the city without seeing the Trevi for yourself. Aim to visit early in the morning or late at night to avoid the crowds, then make your way to the front and throw a coin into the water for good luck, as seen in the Hollywood film, Three Coins in the Fountain, which tells the story of three American women who fall in love here.

The Colosseum
This is the starting point of Prince Dino’s tour of Rome in Three Coins, where he shows American girl Maria his personal highlights. If you want to get to know the Colosseum and its thousands of years of history, the best thing to do is to buy a Roma Pass, which not only gives you free entry to several historical sites and museums, but it also allows you to skip the line here. Queue-jumping can save you valuable time during your trip. Once inside, you can explore the arena and learn how and why it was built. Look out for thousands of years’ worth of graffiti on the walls, too!

The Colosseum has also made appearances in Eat Pray Love and Roman Holiday, but many people assume its big starring role was in the blockbuster film, Gladiator. However, director Ridley Scott actually thought that the building was too small, so he recreated it in a studio in Malta. 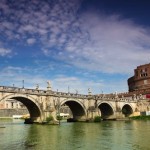 Castel Sant’Angelo
When Liz Gilbert (Julia Roberts) arrives in Rome on the first leg of her Eat Pray Love adventure on the big screen, we see her on the battlements of the city’s castle, enjoying views of the streets below and the winding River Tiber. You can follow in her footsteps, before walking over the Ponte Sant’Angelo Bridge and looking out for barges and boats tied beside the river.

Princess Ann and Joe spend the evening on a barge close to the Castel Sant’Angelo in Roman Holiday, where they are followed by detectives and have to make a quick getaway – hopefully you’ll be able to linger a little longer and soak up the atmosphere of Rome at night. If you fancy something different, walk away from the river, to the west, and you’ll soon come across the Vatican, where you have the opportunity to climb the Dome of the Basilica in St. Peter’s for a different panorama of the city. This climb was recreated in the studio for La Dolce Vita, with the intrepid Anita Ekberg wearing heels.

The Roman Forum
Once the centre of commerce and politics in Ancient Rome, this area is now in ruins, but continues to attract both film crews and tourists. In Roman Holiday, our two main characters meet at the Arch of Septimus Severus, which is just one of many triumphant arches built to commemorate Roman victories in battle.

The Forum is right beside the Colosseum, so make sure you set aside a few hours to visit both of these locations at the same time. The crew of The Talented Mr. Ripley followed the tourists and filmed here, to show the main character enjoying a little sightseeing. In fact, Ripley makes two visits to Rome during the film, but not all of his time is taken up with ticking off historical sites, as he has a much more sinister agenda…

The Fountain of the Four Rivers
Passed by Liz Gilbert in Eat Pray Love and visited by Meredith and Ripley in The Talented Mr. Ripley, this is another fountain to tick off your list. It consists of four statues, each representing a major river around the world – the Nile, the Ganges, the Della Plata and the Danube. You’ll find it in Piazza Navona, which is a lively open space where street artists tend to congregate. Just a few streets away is Liz’s favourite gelato shop, San Crispino, where you can treat yourself to a scoop of gelato, choosing from over 100 flavours including Valrhona chocolate, ginger and cinnamon or whisky.

If you want to create your own walking tour, the Rome film location map from lowcostholidays.com can help you to plan your route. Whether you’re gripped by romantic comedies set here, or you want to see the darker side of cinema brought to life before your eyes, Rome is the place to truly indulge in your love of film.