Flowers in My Hair

The best Grateful Dead show was New Year’s Eve 68-69 at Winterland. 5,400 people in the audience, 6 people on the bandstand — everybody on LSD. When “Viola Lee Blues” came back to the chorus, the cosmos collapsed. There was another night at Winterland where Janis (Joplin) sang with Pig Pen and Joan Baez and her sister Mimi Farina danced barefoot onstage, I forget when.” Joel Selvin

Lights by Journey
When the lights go down in the city,
And the sun shines on the bay,
Do I want to be there,
In my city,
Ohoh ohohoh ohoh

Perhaps it’s a sad reflection of my personality, but each time I land at a destination for the very first time I always associate my approaching destination with a song.

Okay, I admit to being a music tragic … my kids would say “music freak”, most likely. The trouble is that the song stays with me the entire time I’m in that city and eventually becomes … well, irritating.

For example, when I first landed in Las Vegas, Viva Las Vegas by Elvis Presley haunted me for four days. In Dubai, it was Ahab the Arab by Ray Stevens. As for my first ever approach to London’s Heathrow Airport … well, Monty Python fans will be able to guess that one.

Landing gear down – San Francisco was in our sights. My head was jumping from one song to another to another and back again, such is the history of music in this magical city. So when I was offered the opportunity to tour around my favourite city by the bay on the Magic Bus I grabbed it, along with the tie dyed handkerchief and flower I was given, with open arms.

In true hippy style, the Magic Bus promotes itself as not just a tour … it’s a trip (man!!). The only thing you don’t get on this trip to help you authenticate the whole experience is a couple of LSD tablets. It is, without a doubt, the best ninety minutes of nostalgia, romance, heartbreak and fun I have had on a group tour for a long time. Throw into the mix our celebrity host for the day, Joel Selvin, and Haight/Ashbury was calling all the way from our pick up point at Pier 39.

Joel has been the music critic for the San Francisco Chronicle since the late 60’s and no-one knows the history of music in this great city better than Joel … no one!

Half the tour is sightseeing places like the aforementioned Haight/Ashbury, along with the Golden Gate Park, Chinatown, The Fillmore, North Beach … the list goes on. If a place has ever had anything to do with music in San Francisco, it’s on this tour, along with the most distinctive bus you will ever ride in, and of course its hosts, duly decked out in outfits that Donovan himself would have been proud of.

Whilst you’re being driven from one place to the next, a documentary of the 60’s is played on the bus – but not just on any old video, not on the Magic Bus. The sides of the bus are blanked out by sliding blinds that turn into movie screens and a full on history doco plays out in front of you. Throw in music from the era and you have one very special 90 minute Journey (pun intended).

Before five minutes were up, everyone was singing, dancing and clapping their way through Scott McKenzie’s classic.

Bill Graham made sure that San Francisco was THE place for music and that The Fillmore was the place to be seen. To actually stand in the Poster Room of this ultra-famous concert venue was a highlight that no true music tragic could ever forget. The trick was trying to see as much as possible before we were forced to move on. Another trick was to remember who had performed here and who’d been a support act before they made it to the big time. 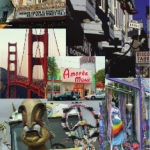 Flowers in my hair

For a final slice of memory lane pie, I suggest you take five minutes and walk into Amoeba Music at 1855 Haight Street. Joe Goldmark has kept this last bastion of all things musically vinyl going and it’s still as popular today as ever. The place was packed with people when I was in there – folk of all ages looking for their favourite ‘33’ or ‘45’ or maybe a poster from a concert they think they went to in 1972 but they’re not quite sure. You can even buy yourself a record player if you don’t own one!

Sure you can do the Cable Car, go to Alcatraz, be seen at Pier 39 and ogle at the Golden Gate Bridge, but nothing in this city by the bay compares to its musical history. A history that screams at you from every single corner … and I loved it.

“There were so many ‘best shows’ I saw at the Fillmore was. So many to choose from — Otis Redding, first Led Zeppelin (opening for Country Joe and the Fish), the Who does Tommy, lots of incredible guitar — Hendrix, Albert King, B.B. King, Johnny Winter. Pick one? Aretha Franklin backed by King Curtis and Billy Preston and the Memphis Horns coming back for her encore with Ray Charles on her arm.” Joel Selvin

Gary flew to San Francisco courtesy of Air New Zealand. Direct flights to this musical mecca are daily from Auckland.

“The main clubs to go to in the late ‘60s were The Fillmore. It was happening six nights a week during the summer and the Avalon ran three or four nights. There were clubs like the Matrix in San Francisco or New Orleans House in Berkeley or Lion’s Share in Marin where you could see a lot of other bands that might not be appearing at the dancehalls.” Joel Selvin

Where to Swim in New York State

Treasures of the Sierra Nevada