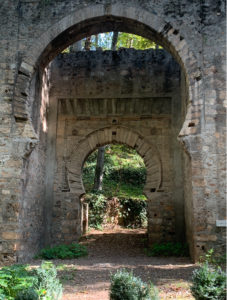 Sometimes you have no control over traffic snarl ups, slow taxi drivers, train delays or alternative timetables – such was the case when I had just one day to get from Lisbon in Portugal to Granada in Spain. It started off well enough and then slowly my travel plans went off course somewhat.

I had breakfast at my hotel in Lisbon at 7:30 am (that’s what they call an early start). At 9:15 am I took a taxi to the airport – all hunky dory so far. Next catch the 12.20 pm flight to Seville (there were no direct flights to Granada on the day I wanted to travel). We all boarded on time and then proceed to sit on the tarmac for 30 minutes until the tower allowed the plane to depart. Now without the delay I had 87 minutes to get a taxi from Seville Airport to the Seville Train Station for my 3:57 pm train departure, but with the take off delay this was cut to just under one hour. 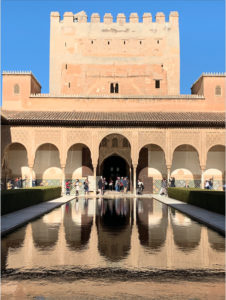 “I do not know what to call this land upon which I stand. If what is beneath my feet is paradise, then what is the Alhambra? Heaven?”

Then the bags took 10 minutes to come out on the carousel! I was down to 50 minutes – this is when you bribe the taxi driver to drive fast. I arrived at the train station to find I had 20 minutes to get my ticket, buy some food and drink (there was none) and catch the 3:57 pm train to Granada. I was then informed by the conductor that this direct train to Granada could only go as far as the town of Osuna, where as we approached 90 minutes later all I could see were huge olive plantations. Everybody on board was then transferred by coach and driven to another train station town called Antequer Santana. Here we switched coaches to be transferred once again by road to the last stop at the train station in Granada – you have to love travel don’t you?

Thankfully everything else went smoothly as I arrived at my hotel about 8:00 pm and soon found a local bar down the street packed with Spaniards where Spanish was not translated on the menus into English – such a good sign. There were 39 red (vino tinto) wines by the glass (I didn’t bother counting the whites). There is nothing like the exuberance of a Spanish bar, the noise just reverberates off the walls for starters. They played Motown as background music and the place was humming as the noise decibels from the loud talking almost drowned out the music.

With just a tourist map I negotiated the back streets determined to walk to the Alhambra Palace – the city’s number one tourism attraction. My plan was to make it to the gate by 11:00 am and walk through at least half the grounds, and then tour the palace before wandering back to the entrance via the rest of the gardens – the online guidebooks advise an average visit should take a minimum of three hours. 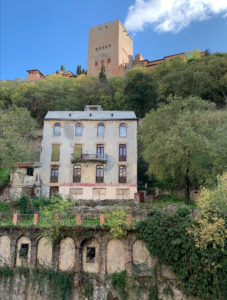 The streets in places were narrow and then became steep as I walked onto the lower slopes of the mount well below the austere fortified walls. As it became steeper, I walked through the Puerta de las Granada (archway) into a park-like area of tall trees as couples strolled uphill holding hands and families made their way slowly higher above the city. A cobblestone lane took me higher until suddenly I was at the entrance gate where there were tourists – lots of tourists. Eventually I made my way and was admitted to the desk where my online reservation was exchanged for an entrance ticket, one showing my 11:00 am Palacios Nazaries (palace) entry time.

A word of warning: to buy tickets to the actual palace itself needs to be done months in advance online, otherwise you can only walk through the grounds and gardens which are extensive. When making your online booking there will be an indication of what times are still available, so you may have to take what is left. Note: look for the ‘no guide’ option if you want to wander the Alhambra alone – it is also much less expensive.

With little fuss I entered this great Moorish fortress/palace, built under the Nasrid dynasty founded by Muhammad I Al-Ahmar. In 1238 the construction of the palatial city began. In later centuries, Yusaf I and Muhammad V ordered more palaces to be built inside the fortress until the last Sultan of the Nasrid dynasty died in 1492.

It was November, the sun was beating down, and the heat was radiating off the hilltop walkways and outer fortified walls. I heard a loudspeaker voice in English say that all tickets for the Palace Tour had sold out for the day – only Garden Tour tickets were available. I wandered on in a clockwise direction past the imposing Iglesia (Church) de Santa Maria de la Alhambra and then into a square, which was teeming with tourists who were mainly lining up in a holding area to start the actual Palacios Nazaries Tour. Always allow 30 minutes before your tour starts as many people arrive late expecting to just walk in, this means they end up jumping the line which delays everyone who arrived early. 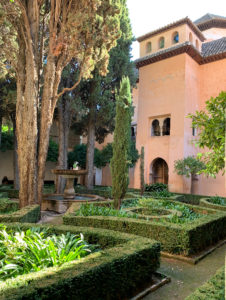 Many people, including families and groups had a multi-lingual tour guide explaining every wall icon and the interior of the many rooms inside the Palace. Without divulging the tour highlights, (you’ll want to be as surprised as I was) you’ll be gobsmacked with the lavishness and extravagance of the rulers who once lived here. Isabel I of Castile and Fernando II of Aragon (1492-1516) incorporated the Alhambra into the Crown as a Royal House as well as assigning it military functions. Further enhancements continued during the reign of Carlos V (1500-1558) who built a grand imperial renaissance palace.

As an aside, the famous American writer, Washington Irvine travelled to Granada in 1829 where he was inspired to write, ‘Tales of the Alhambra’. (Look for his statue as you walk up through the lower grounds). In 1870 the Alhambra was declared a National Monument and finally in 1984 the UNESCO World Heritage committee bestowed on the Alhambra and the Generalife, World Heritage status.

Once the palace tour is completed it was time to wander through a series of formal grounds and gardens to where the red roof-tiled buildings of Generalife are located. Beyond the Alhambra walls, Generalife was where the recreational buildings of the Nasrid Sultans were situated as well as gardens used for agriculture – some still in use today. The area includes Los Jardines Bajos, El Placio del Generalife, El Patio de la Sultana and La Escalera del Agua y los Jardines Altos.

In just over three hours I was wandering back down into the Centro Ciuda. It was thirsty work all this sightseeing lark so I stopped at a roadside café on the first avenue I came to. With a glass of red wine and some tapas I watched the world go by. I’d forgotten how fashion conscious Europeans are from outlandish sunglasses to studded boots, young Spaniards strutted their stuff like they were on a fashion house catwalk – that alone deserved another glass of wine.

There is much more to Granada than just the Alhambra Palace, so take a few extra days and just wander the old quarter – the Albaicín – to soak up some true Moorish ancestry and then stroll the Carrera del Darro as the sun sets, past crumbling bridges and the elegant facades of ancient buildings – that is what Spanish life is all about. 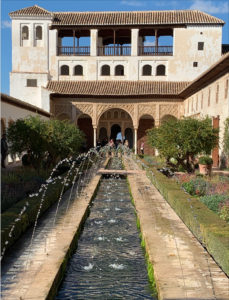 The author would also like to thank UTracks for assisting with my hotel and hiking arrangements while visiting the Granada region of Spain. www.utracks.com