This summer marks the 150th anniversary of Switzerland’s first Grand Tour and the birth of modern tourism, for 1863 was the year that Thomas Cook launched his first “conducted tour”, which turned Switzerland into Europe’s first mass tourist destination. Mr Cook’s intrepid group spent 21 days covering the country by boat and train, as well as on foot and horseback. Today, however, it’s possible to replicate that golden age of travel in a little more style and comfort.

The Kulm Hotel St. Moritz is one of the grande dames of the Swiss tourist industry. It opened its doors in 1856, seven years before the first Grand Tour, and immediately became popular for summer spa and painting holidays, particularly among the British who comprised around 75% of the guests and were quite happy to make the arduous journey over the Alps to spend a few months every year enjoying the fresh mountain air.

From 1864, the owner of the Kulm Hotel, Johannes Badrutt initiated winter holidays to St. Moritz with a bold wager. He promised the last departing summer guests a free stay from December to the following spring, if their winter holiday in St. Moritz was not as sunny and as pleasant as in summer. Tanned and full of enthusiasm, the British guests returned home the following spring and word quickly spread about the fantastic winters in the Engadine valley. Fast forward to the 21st century and the Kulm Hotel St. Moritz is still going strong, regularly appearing in lists of the top ten luxury hotels in Switzerland.

Kulm Hotel St. Moritz was the first hotel to be built in St. Moritz. The Kulm Hotel opened its doors in 1856 and immediately became popular for summer spa and painting holidays, particularly among the British who comprised around 75% of the hotel guests. The owner of the Kulm Hotel, Johannes Badrutt, initiated winter holidays to St. Moritz from 1864. 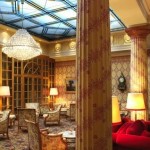 ince the 19th century, the Kulm Hotel has changed considerably through expansion and renovation, but the fabulous location at the heart of St. Moritz with views over the Lake remains the same. A member of The Leading Hotels of the World, Kulm Hotel St. Moritz has 173 rooms, five restaurants (offering formal dining, French fine dining – the Gourmet-Restaurant the K awarded 15 points by GaultMillau, Italian, local Engadine specialities and Japanese with 13 GaultMillau points), the extensive Kulm Spa St. Moritz (with a 20 m indoor pool with underwater music, various saunas and steam room, a Jacuzzi, a fully-equipped gym and treatment rooms, all with stunning views over Lake St. Moritz) and six conference rooms, with capacities ranging from 50 to 500 people.

Entertainment and sports facilities include the 9-hole Kulm Golf Course St. Moritz, three tennis courts, a natural ice rink, a curling field and the “Marmotta Club” for children. The Kulm Hotel St. Moritz is inextricably linked to the Cresta Run through the Sunny Bar, where tobogganing pilots have congregated for decades; the walls are lined with trophies and images of famous people who have hurled themselves down the infamous ice track.
Awards in 2013 for the Kulm Hotel St. Moritz include a place in a list of the top ten best holiday hotels in Switzerland compiled by renowned Swiss newspaper SonntagsZeitung and the top ten most welcoming luxury hotels in the country list put together by Switzerland Tourism.
In 2012, the Kulm Hotel’s gourmet restaurant the K received 15 GaultMillau points and, in the latest ranking list of Switzerland’s best winter hotels, Kulm Hotel St. Moritz ranked at number 4 in the category of five star hotels as ‘one of the best managed and most excellent hotel in the Alps with immaculate consistency’.

Both the Kulm Hotel St. Moritz and its sister property Grand Hotel Kronenhof are owned by the Niarchos family.

The luxury side of Ibiza