The Magic of Istanbul

The Magic of Istanbul
By Adrien G Gallo

Seven hills, beautiful waterfalls of domes, hundreds of mosques … visitors will surely succumb to the charm of this magic city.

Cocteau, the French poet, said about Istanbul: “It’s an old hand with rings stretched out towards Europe”. New Rome, the plenitude of Islam. Istanbul has seen itself attached to all names.

The 14 million people of Istanbul take great pride in belonging to that source of permanent inspiration that the city represents.

From Byzancium to Constantinople and finally Istanbul, it has inherited great treasures bequeathed by three empires – churches, domes and tall minarets.

To begin with Saint-Sophia, founded by the Roman emperor Constantine and resconstructed by Justinian during the 6th century. It’s one of the three oldest religious monuments of our era. Just opposite is the Blue Mosque, built under the request of Sultan Ahmet I at the beginning of the 17th century in order to surpass the one of Soliman the Magnificent. It’s distinguished by its 6 minarets and its earthenware windows. That’s where its name comes from.

The Soliman mosque is also the consequence of an overbid. Each sultan wanted his name associated with tremendous works. This upmanship of luxury ambitions throughout the Ottoman’s history left Istanbul with a great legacy .

And the same rivalry applied to the palaces. The most reputed, the Topkapi Palace, dates from the 15th century. It was the sultan’s residence. Now it’s one of the most visited places in the world. Its famous harem wont leave anybody indifferent.
One can also admire the world’s most beautiful diamond and the jewels composing the sultan’s treasure. No less monumental is the Dolmabahçe Palace where modern Turkey’s father, the Ataturk, died. Built in white marble during the 19th century it is about 600 meters long; fourteen tons of gold and 36 tons of silver were used for its decoration.

However, Istanbul isn’t just a museum town for imperial grandeur. It’s also a bridge over a majestic river connecting two seas, the Marmara Sea and the Black Sea, separating the two continents of Europe and Asia, namely the Bosphorus.

It must be the only place in the world where it’s possible to say to a friend, let’s have a coffee on the other continent…

Permanent comings and goings of tankers, merchant ships and ferryboats do a constant shuttle between the Asiatic and European shores. It’s in this harbour universe that one can observe best of Istanbul life; for instance, at the Galata bridge side, near the new mosque, and in the Sirkeci district. The famous Orient Express stopped here and passengers crossed the bridge directly in order to reach the Pera Palas Hotel . Kings, princes, writers and actors had their habits here (one can visit the museum room of Agatha Christie which contains some of her personal things.) 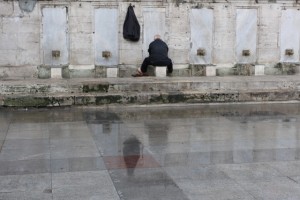 At the bottom end of all these splendors, modest and, religious decors are visible in the crowded twisting streets, coloured steps and the thousands of typical restaurants. In the evening, the most lively part of the town is around the pedestrian street Istiklal, leading down from the Taksim place to the subway station called Tunel. It only has 2 stations and the ride lasts 1 minute 44 seconds. On Istiklal street runs the last old style tramway. Halfway there is a dead end where one can dine in the evening in the middlle of flower and seed merchants. In the same fashion, on the another side of Golden Horn, the streets of Kumkapi offer similar emotions. Having dinner at the top of Galata Tower while contempling the lascivious grace of the belly dancers, surrounded by the thousand and one lights of Istanbul by night is an unforgettable experience. The tower was built under the emperor Justinian in the year 528. The restaurant is situated 140 meters high. Many cafes near the baroque mosque next to the small district square have become the rallying place for Istanbul students. Across the Bosphorus on the Asian side the district is also very much alive in the early evenings. The atmosphere is more traditional during the daytime near the little Bazar.

Shopping amateurs have the choice between several solutions. On the Asiatic shore they can walk along Bagdad street where modern shops are numerous or in the more popular Europe Istikal street, the Laleli district is frequented by Russians coming here for business and offers more modest products. Finally there is the Grand Bazar, a place for everybody who’s visiting Istanbul. You can find everything here. Not far, at the university exit, is the book market where one can buy novels, the Coran or many other books about Istanbul, which allow you to penetrate deeper in to its mysterious disorder. 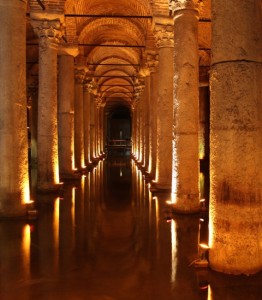 A stay in Istanbul cannot be imagined without a cruise on the Bosphorus. It’s the opportunity to appreciate the town’s outline as well as discover the beautiful residences called Yalis. Among the most beautiful examples is the Ostrorogs Yali situated in the village of Kandilli, and don’t forget about the red-fronted Amcazade Huseyin Pasa Yali. These big wooden houses face the water and belong to wealthy Istanbul people. Before them, sultans knew how to richly beautify the Bosphore shores, building summer pavillions such as the most outstanding ones, the Kuçuksu and the Aynali Kavak Pavillion. Other marvels spread out in the surrounding countryside, like the Maslak Pavilion, (the sultan’s hunting pavilion  is a magnificent sample of the Ottoman’s decorative style of the last century). But it’s not along the shores that one can admire the traditional wood houses . The neighbourhood of St Sauveur de Chora Church is one of the most coloured and quietest places of the old town and boasts some of the best old wood houses … and provides a pleasant walk in another era

A walk down Bagdad street on Asiatic shore may not be conceived without having taken at the least once a dolmus, meaning loosely to fill up; the ride will start only when the car is filled up with passengers. Luckily the dolmus fills easily. You cannot miss them. These collective taxis do follow a fixed itinary, and are often old cars. Also the minibus should be tried. You’ll get an idea about the driver’s skill and the local sociology. It’s a good way to talk to the other passagers who won’t hesitate to ask many questions and probably will propose that you share a glass of tea at the end of the ride. Remarkable is the extraordinary patience of turkish car drivers, using the horn in its basic function, just to warn but never used in irritated expression. In Istanbul’s many traffic jams, insults are extremely rare.

« The grace of a cup of coffee which last 40 years » says a proverb. Coffee in Turkey is a ritual nobody escapes. Genuine coffee must be boiled three times and the best is the one which shows a sort of shape on the top. The streets are steaming with all sorts of coffee houses. You can play tavia (tritrac), read newspapers as other do, come just for a chat. Esthetes may make a detour through some of the Istanbul cafes maintaining a particular atmosphere, for example: Cafe Pierre Loti, on Eyup hill overhangs the Golden Horn, Iskele Kahve in Salacak and Sark Kahvehunesi cafe inside the Big Bazaar.

Walking through the heart of the town will give you an appetite. The smell of spices, sidewalk cooking, the pastries on display or fruit and vegetable bazar stands all have one objective; to make you hungry. Turkish cooking is recognised as one of the best in the world. And it’s often in cheap restaurants that one eats the best and at very good prices. Besides delicious specialities such as loukoums, « soft as virgin’s breast » said the poet, pistachio halva, haklavas, and other kadavifs, the restaurants offer traditional meals charming every connoisseur. Among the entrees are la pastirma (in the sun with smoke dried meat) midye dolmasi ( big stuffed mussels). As a main dish try the famous mixed grills. Kalamars dolmasi, stuffed with green pepper and chopped tomato, oil and oignons, dill and pepper or also Kokorec (on barbecue grilled sheep tripes). If you can’t decide, try being adventurous while being seduced by the names you will see – a la carte Kadin Budu Kofte (women leg’s meat ball), Hanim gobegi (lady’s belly button) or Iman Bayildi (iman ectasy)