The pier must be almost a kilometre long and we’re following the baggage boys who are carrying our bags. At the end of the pier we’re greeted by smiling islanders and a colourful cool drink. It’s past midnight and, after a 12 hour flight and a couple of lengthy transfers, we should be exhausted. Instead we’re exhilarated, maybe a tad disorientated, but excited to have reached our island destination.

We’re in the Maldives, one of the most pristine places on earth. Marco Polo once described this cluster of islands as “The flower of the Indies” and Joao de Barros said “They look like an orchard”. These two historic travellers knew a thing or two about describing this reef nation made up of 1,200 coral islands. Today only 200 of the islands are inhabited and 90 of them are exclusive tourist resorts. The islands are the flattest on earth which, with global warming and rising sea levels, could sadly see them vanish in the not-too-distant future. The threat is so real that the government is considering purchasing land in neighbouring countries in case they need to relocate its roughly 300,000 residents. Let’s hope it never comes to this as more than half a million tourists visit the Maldives each year.

By the time our bags have been carried to our room we realise we’ve arranged no change to give our smiling porters. We’d been told that tipping was officially discouraged in the Maldives, however we’re still mortified and promise to change some currency the following day.

To reach the Maldives we flew to Singapore where connecting flights depart daily to the nation’s capital of Male. From Male airport to the islands transport is either in a speed boat, a helicopter or, as we experienced, a dhoni – the traditional Maldavian fishing boat. We were only a 45 minute speed boat ride from our island but as we arrived late at night we were escorted onto a wooden dhoni, complete with our own Maldavian captain. A normally quick transfer turned into a couple of hours in the dhoni – a slow and fitting way to begin our laid-back holiday. 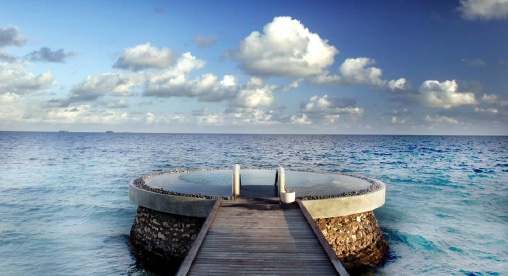 At Bodufinolhu, our chosen island, the lifestyle is relaxed and the setting prettier than any postcards with swaying coconut palms and pure white sand on an island that stretches just 700 metres in length. Our unit sat only metres from the waters edge of a spectacular crystal clear lagoon. Our room itself didn’t consist of much – a huge sumptuous bed, a massive bathroom and an air conditioning unit, essential as the temperature rarely fell below 29 degrees Celsius.

We’d been told that the Maldives had some of the clearest waters on earth but nothing prepared us for the brilliance and clarity of the warm water. Scores of colourful fish swam at our feet and we could almost reach out and touch them.

For the keen scuba diver instruction is available and I wish now that I’d been brave enough to have a go. Nevertheless those less adventurous, like myself, can don mask and fins and swim a couple of metres from the beach to enjoy the underwater world. I generally like to touch the bottom of the pool so standing in the deep ocean with fins was slightly unnerving. I told myself I would stay near the shore but once in the water I became entranced in the underwater life. I swam over coral gardens of the most incredible colours, some almost fluorescent, with hundreds of different size fish nestled amongst them and before I knew it hubby had steered me to deep water underneath the pier. From calmly floating in the shallows the temperature of the water suddenly cooled and I found myself looking into an underwater drop of some 20 to 30 metres. I’m proud to say I didn’t panic, even when I came within touching distance of a huge manta ray. For scuba divers there’s the thrill of diving with turtles, manta rays, moray eels, whales and wrecks, including the shipwreck The Maldive Victory.

Back on dry land we were content to sit and laze, staring into the sky and sea, reading and doing very little. Had we wanted we could have joined in with staff organised activities such as beach volleyball, tug-of-war between guests and staff and the highly entertaining Big Game Fishing. There’s also catamaran sailing, day and night fishing, windsurfing and scuba diving. Hubby decided he would try his hand at windsurfing and as he disappeared on the blue horizon I relaxed on the beach as minutes melted into hours and hours into days.

Mealtimes were casual and laid-back and we sometimes walked barefoot to dinner. Fresh fish and Maldavian curry dishes starred on the menu and we got to know and enjoy the gentle company of Mousaka, our waiter, who taught us amazing ways to fold napkins.

For a different perspective of the Maldives leave your beach gear behind and take a cruise to the busy capital Male. There are no beaches here and there are more mopeds than people, at least that’s how it seemed. The city is both mellow and vibrant, however you need to dress modestly in Male, especially if visiting a mosque.

Male is perhaps one of the smallest capitals in the world, with narrow streets bustling with activity, so walking is the best way to get around. It’s immaculately clean, with the tradition of street cleaning every morning, just as the sand sweepers sweep the beaches on the resort islands. Attractions worth seeing are the National Museum, the old Friday Mosque, a magnificent structure built in 1656 and housing the tombs of sultans and the Grand Mosque, the biggest mosque in the Maldives. 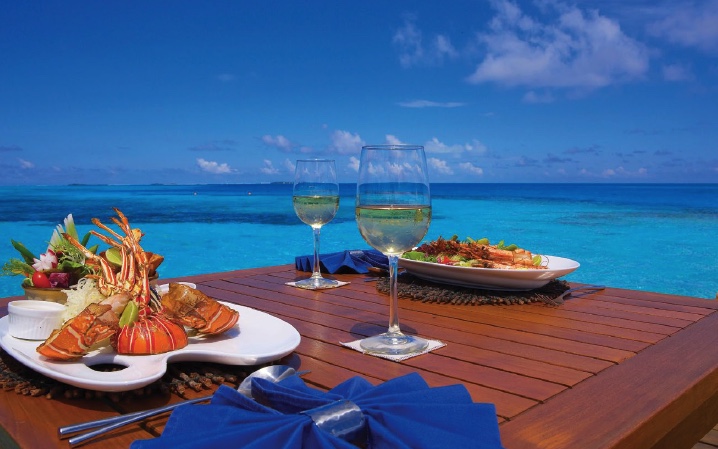 Prayer is important to the Maldavians. They stop to pray five times a day in the mosques and even television is interrupted during prayer time. You’ll barely notice its importance on the resort islands but the reverence is apparent when you visit Male.

Shops are open until 11pm at night so there’s plenty of time to wander the back streets and haggle with the locals for bargains. Along the “Singapore Bazaar” you’ll find everything from cosmetics to electronics and at the local market there’s a variety of produce made on the outer islands. You can soak up the exotic and colourful atmosphere of the fruit and vegetable markets open until late in the night. Undoubtedly though it’s the fish market that attracts the most people, particularly at night time when the fishermen return from their day at sea. As the sun sets and the fishermen unload their catches the market is transformed into the busiest place in the Maldives. Aside from tourism, fishing is still the backbone of this republic.

Despite the 2004 Tsunami, the Maldives remains wonderfully pristine and one of the most beautiful places I’ve visited. If you want to get away from the world, to a paradise that promises relaxation and luxury this is the place. There’s not a vestige of pollution here to mar what is often described as one of the last lost paradises on earth.

There are dozens of operators offering holidays to the Maldives. Check to see what’s on offer. It’s worth shopping round and the easiest option is a package holiday where accommodation, meals and transfers are included. Check to see what extras are included and make sure you take enough currency to pay for drinks by the pool, extra excursions and activities.

Tipping is actually discouraged however as we found out the porters are often also the island sweepers who are accustomed to a small payment by westerners.

The Maldives is warm all year round but the best time to visit is probably the peak season which is December – April. Visitors are issued with a 30 day visa on arrival.

Although alcohol is available on the resort islands, it is not allowed through customs. Any alcohol taken to the airport will be politely taken from you at Customs.

The currency is the Rufiyaa but U.S dollars are accepted at the resorts

Don’t take lots of luggage – with the warm climate all year-round you won’t need it.