Not much has really changed in this Asian city, taken as it is in a time warp between the colonial and modern times. The men still wear sarongs (longyis) and monks can be seen in the streets celebrated their ceremonies. Everyone is nice and friendly as Mandalay was once a center of Buddhist learning.

Rudyard Kipling has made famous with his poem “The Road to Mandalay”. To borrow a phrase from Somerset Maugham, “Last night I dreamed I went to Mandalay again!”

This former royal capital and the last to fall before the British took over, evokes images of old romantic. Royal palace and moat surrounding at the base of the imposing Mandalay Hill.

Mandalay lies on the banks of the river Ayeryarwaddy inside Burma. According to legend Lord Buddha said that a great city would be founded at the foot of Mandalay Hill and King Mindon made this legend a reality in 1859. Mandalay is the Burmese town of Burma and the arts and crafts center. It is a majestic and beautiful city with many architectural gems.

The Royal Palace was burned during World War II. Only the original foundation and a model in the museum can be seen. Mount Mandalay Hill for giving an overview on the palate, with its many pagodas and see the colossal Buddha on top. 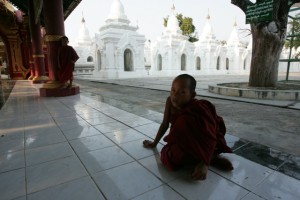 Take a pedicab to Kuthodaw Pagoda. Each of the 729 temples here house a marble slab inscribed with Buddhist scriptures. The central pagoda is “the greatest book in the world” with all its slabs inscribed with Scripture. Opposite is Sandamuni pagoda also has a large collection of inscribed slabs can be a way that the monks were found to protect faith.

The ruins of Atumashi Kyaung (Incomparable Monastery) located at the base of Mandalay Hill as the fact Kyanktawagyi Pagoda. Mahamumi the pagoda is the second largest in Shewdagaon and known for its Buddha image covered with thousand fine gold leaf thickness. The main pagoda is surrounded by rooms containing statues of legendary warriors where the faithful rub their body to heal ailments. Just outside the pagoda are streets where makers of Buddha images are busy at work. You too can buy one to bring.

The market in the center of Mandalay, Zegyo comes alive at night. Nearby is a group of good places to eat snacks, ice cream or a full meal. So stop for a moment to snack or drink juice of sugar cane.

Mandalay is a center for silk and cotton weaving, bronze marble sculpture and crafts silver and Kalaga tapestries woven by women of Burma. The paint is beautiful. You can not go without shopping for yourself and for gifts. The ruby “pigeon blood” red are exquisite and definitely recommended.

In April Thingyan (Water Festival) welcomes Burmese New Year. The full moon of the lunar month Kason is celebrated in different pagodas in April / May. Join the festivities!