Once Upon a Time in Ubar

The Lost City of the Sands

Once upon a time there was a city where the streets are paved in gold and fortified by imposing, lofty pillars unlike anything ever created in the world. Coined ‘Paradise on Earth’ its inhabitants were also one of the richest due to the many prosperous years in the trade of priceless, exotic and luxurious commodities: fruits, silks, gemstones, spices and frankincense which was revered throughout the world.

The Holy Quran describes it as the “City of Towers”,  the legends of the “Lost City of Ubar” has for centuries been one of the Middle East’s greatest mysteries. Bedouin tales and local folklore is cited even today among the local population about the ancient city.

Located in Shisr in the southern Dhofar region of Oman, it is believed that Ubar existed from about 2800 B.C. to about 200 A.D. and was a desert outpost near a verdant oasis, on the camel tracks where caravans assembled for the transport of frankincense across the desert to the rest of the world.

Today only a hole in the desert floor, a black void full of ones imagination of what this ‘Paradise on Earth’ must have been like, is what remains in present day Oman. Tours are readily available from near-by Salalah for those curious in a site that was one mans mission for over twenty years.

The Lost City of Ubar, was discovered in 1992 by NASA imaging technology by a team of British archaeologists lead by the passionate Sir Ranulph Fiennes, uncle of actor Ralph Fiennes.

Myths surrounding Ubar were unparalleled even by “lost city” standards. Ubar was a magnificent kingdom, immensely rich with “streets paved with gold.” It was a city of tall towers whose like had not been built ever in the whole world. T.E Lawrence called it “The Atlantis of the Sands.”

Legend has it that Ubar was said to have become a hotbed of wickedness and its people corrupted by its riches. It is believed that like the biblical cities of Sodom and Gomorrah, it also suffered the wraths of God. It is said to have been destroyed by the cyclonic storms that swept away the fort and sucked it into the deep hole that remains even today. Historians chronicle Ubar’s destruction somewhere in the first century AD.

Very little is known of prehistoric times in the barren deserts of Arabia. The rock drawings in the desert suggest that the prehistoric people of the second millennium were not the Arabs from the north. In the past the descendants of the Mahra tribe inhabited these regions. They were Australoid by DNA analysis and lived in Yemen and the Shahra of south-western Oman, on the Dhofar highlands. They are now known as the ‘lost Arabs'(al-‘Arab al-ba’ida), representing the present-day tribes of ‘Ad, Tamud and Gurhum. The Shahra tribe are probably descendants of the People of ‘Ad. The population is now in small numbers. Their native language is very different from Arabic, something older and called the “language of the birds.”

The Dhofar region is a rugged and mountainous region. The Shahra called their land Uz, after the patriarch who must have led them out of The Empty Quarter of the deserts. There was a man in the land of Uz, a man named Job whose tomb is located just outside of Salalah in Oman.

The ‘Ad region possessed something that the civilized world greatly desired and valued in those days: the frankincense tree. The Dhofar mountains had numerous groves of the small trees, whose resin was as valuable as gold in ancient times. It was used as a fragrance, for medicinal purposes and for embalming. The Sumerians were using frankincense and it is mentioned in the Egyptian Book of the Dead.

The People of ‘Ad tended to the frankincense groves with great care and reverence. The harvest was during the month of August. As a holy tree the farmers were only allowed to wear clean clothes, they had to abstain from sex and could not touch a corpse until the harvest was completed. They would make cuts in the branches and gather the sap when it hardened into fragrant crystals. By 900 BC the trade had become a major component of the ancient world trade. Camel caravans and ships carried products throughout the known world. The People of ‘Ad had to find a way around their competitors in the desert, so they redirected their trade routes directly across The Empty deserts. On that camel caravan route they built the fabled city of Ubar, around an Oasis. Traders came here with their wealth to do business and to enjoy the fabulous riches available in the city.

It became a walled city known for great wealth and it was the only source of available water before the perilous trek across the desert. The vast wealth of ‘Ad was used to create a paradise in the sand with vast palm groves and orchards. It is mentioned in Claudius Ptolemy’s Geographos written in the 2nd century AD as the land of the Iobaritae. To the Arab it was called ‘Irem of the Pillars’. 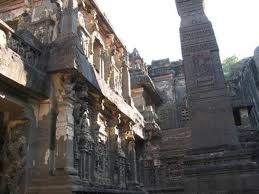 The Downfall of Ubar.

The story by the 13th century historian, Rashid al-Din, tells how the sinful inhabitants of Ubar were punished:

“God punished the people of Ubar with a great wind and a terrible noise from the clouds, which struck them dumb. And in the morning there was nothing to be seen except ruins. From then onwards Ubar belonged to evil creatures, each with a single arm, leg, and eye. And it was known that anyone who went near the ruins would be driven mad with fear.”

Excavations at the site at Ash Shisr found conclusive evidence that Ubar had indeed been located at the oasis and affirming the legends about the destruction of Ubar. The city was located over an immense limestone cavern a natural feature of the region. Heavy flooding had dissolved it and washed away the lime stones from the underground. Perhaps an earthquake had sucked in the city along with the water in the oasis. It was swallowed up by the very earth it stood on.

Ubar was a trading outpost when the Arabian Desert was not in its current barrenness. It was near a water stream which is buried with desert sand now. The rocky bottom was of lime stone which melts when water remains over it during floods. The city was built on such a rocky terrain which dissolved in a flood and thunder storm. From the satellite pictures it is evident that the walls of the settlement had been built over a huge limestone cavern that had collapsed burying the city beneath the sands. The towers guarded a water source in the surrounding 50,000 square miles qualified as the “great well of Wabar.” When the city crumbled it was the result of something like an earthquake and that the city fell into a kind of hole in the ground just behind a large hill. The path to walk down the hill to the hole has a bit of a slope now. Ironically, the Arabic word “Shisr” is the word used for hole.

You can drive up to this place now and in the middle of the night when there is nobody else around except the vastness of the desert; you can feel the strangeness of the ancient past, which is buried below your feet.

Full Day Tours of the Ancient Settlement of Shisr are available with any Salalah Tour Options.

Time for a motorhome holiday