‘Oneiric’, borrowed from Greek terminology and roughly translated as ‘dream’ is exactly that – a hidden gem nestled in the heart of the cool-climate Elgin Valley.  This family-owned boutique wine farm has been in ownership of the Pascall family since 2007. Recognising that the already established vineyards where producing terrific fruit, Matt Pascall decided to instil the help of Jean Smit (Boekenhoutskloof fame) to produce Oneiric’s first vintage, the 2009, which was released upon launching Oneiric in late 2012, while the main homestead was taking shape.

The entire vintage received huge acclaim and set Oneiric, although new to the wine scene, well on its way to becoming one of South Africa’s finest wines.  Niels Verburg (Luddite wines) took over the role of winemaker in 2013 insuring these elegant wines, now served in many of South Africa’s top hotels and restaurants and remain in the same style as the sophisticated 2009 range. 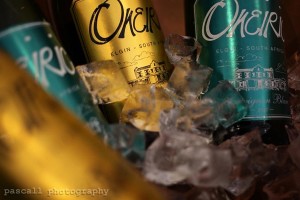 From the personalised font, to the sketch of the homestead, to the Copper theme; each member of the Pascall family put a little of their own touch into creating the ultra standout-ish, metallic look, labels.  In recognition of the families many generations of mining stock, they introduced their Copper label collection, with each varietal’s label playing on a different copper derivative or sulphide; from Fools Gold and Malachite to the rich blue of Azurite and the Copper coloured Cousin Jack.  A unique and somewhat daring move away from the common label which has tongues wagging and have literally taken the wine world by storm.

Oneiric’s vineyards are unique in that the slopes suit the varieties planted there to a tee, the cooler sites house the Sauvignon Blanc and Chardonnay and the warmer sites the red cultivars.  The Sauvignon Blanc and Chardonnay show great freshness and natural acidity and the Red wines are of a fuller style with dark fruit and spice not generally encountered in the Elgin area.  The Oneiric Wines reflect their terroir and maintain an overall balance making them great food wines.

The Oneiric winery offers a tasting barn, a gift shop, picnic areas, walk ways, trout dams and views over the Kogelberg Biosphere, part of the UNESCO world heritage site and home to the greatest variety of plant species in the world, which often leave guests speechless.

Visits to Oneiric are by appointment only, through Shan Pascall, the stalwart behind all things Oneiric.  Shan can be reached on +27 (0)71 481 9560 or shan@oneiric.co.za