If you’re wondering where to celebrate All Saint’s Day – November 1, why no try Todos Santos? This remote village in the western highlands of Guatemala has an appropriate name and the festivities, highlighted by a unique kind of horse race, are, indeed bizarre.

The Todos Santos adventure begins with a literally breathtaking two-hour drive from the town of Huehuetenango (170 miles northwest of Guatemala City), winding up a dirt-and-mud road through the enormous Cuchumatanes mountains (a contination of the Andes Range) with peaks as high as 13,000 feet. As you approach the village, thick clumps of clouds and early morning mist slide over vivid shades of green, varying from the deep colorus of the pine and spruce trees to chartreuse and gold as the sun spots through the forests and fields of corn and wheat. The sheer drops and huge jutting mountains facing each other will jolt you into a new kind of perspective on nature.

The mist, thick as cotton wool, suddenly reveals a flock of sheep followed by a Maya shepherd in colourful dress, brightly visible through the haze. Sheep are relatively new to this ageless land, having been brought in by Spaniards in 16th century, but the Maya seemed to have escaped from pre-Columbian times.

This is the land of the Mam, one of 23 different tribes, preferably referred to as grupos, of Mayan Indians that inhabit Guatemala. Each grupo has its own distinct dialect, and there are 275 different kinds of typical costumes in this country.

Todos Santos is almost untouched by the machine age. Until not many years ago the village was accessible only by trails. The Mam (Mayan for grandfather or ancestor) have maintained an amazing ethnic cohesion for centuries. Their agricultural methods and religious costumes are much the same as they were before La Conquista. 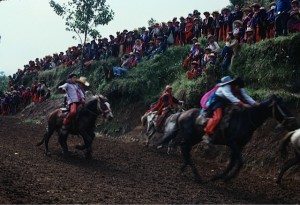 For the two-day festivities, hundreds of mames converge on the village , some carrying flowers for decorating the graves, others lugging a huge wooden marimba, many riding small horses, rented with money they had been saving up all year for  – and wearing their fiesta-best outfits.

The narrow unpaved main street swarmed with multi-coloured clad todo-santeros. The men’s are the most colourful of the 275 kind of local typical dress – they wear brillant crimson pants with white stripes and embroidered designs, shirts with stripes of graduating shades of reds, greens and blues, and large collars that hang down to their chests, densely embroidered in every hue of the colour spectrum. No two collars have the same design, and each tries to be more beautiful than the other, thereby distinguishing its wearer.

The todo-santeros look so much like their Mayan ancestors – copper brown skin, broad faces with pronounced, sometimes hooked noses, sloping foreheads, high cheek bones and straight black hair – depicted on ancient monuments and cave paintings, that they could have posed as models for them. Everywhere there is the buzzing of the Mam language, softly spoken with gutteral clicks. They seem shy but are courteous, and it’s easy to strike up a conversation. 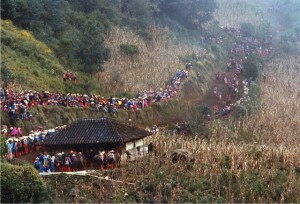 An elderly Mam explained, gently but emphatically  in broken Spanish with a Mam accent, that they do not call themselves indios …….we are los naturales de esta tierra ……..we are of pure Mayan blood and have maintained our culture, religion and costumes throughout the centuries, in our own language. Mam we call ourselves ine , and we are the authentic people of this land …..all others are ladinos. We don’t mix and we don’t inter-marry. The ladinos are the foreigners who came to this country. They have influenced some naturales to the degree that they have abandoned our dress and traditions and they speak in Castillian, and so they have become ladinos also.

Today the large majority of the population of Guatemala is pure Maya. One might say that Guatemala is divided into two basic ethnic (although this word becomes meaningless here) groups: naturales, who have remained essentially pre-Hispanic, and all others, for whom they have the official term ladino a person of Spanish language and culture.

The Catholic missionaries believed themselves to be successful, having destroyed the archives and codices of what historian Sylvanus Morley called “The most brilliant aboriginal people on the planet”, however the Maya have never ceased to practice their costumbres and worship of their own gods, even inside the churches. ( In this region the word costumbre also means prayer, ritual, ceremony, etc.)

By noon, hundreds of naturales and a sprinkling of ladinos from Todos Santos and visitors from other nearby villages, head for the “race track”, a dirt road that runs down an incline for about one kilometer on the outskirts of the village. The spectators and participants form an eye-boggling throng of wriggling colors and patterns.

The horsemen, divided into teams that were organised months before, proceeded up the hill to the starting point. The team leaders at the finish line blow their whistles, and the stampede begins. The riders, who have no conception of horseback riding , bounce all over, yelling and having a great time. They come barrelling down to the finish, all splattered with mud, for a “pit stop” –  a slug of aguardiente awarded by the team leaders. Then back up the hill for the next run. The whistles blow, and down again, at full, out-of-contol gallop.

Each time the bouncing increases, and the riders seem to spend more time up in the air than on the saddle. Then down to the finish for aguardiente and cheers. Progressively it seems as if the horses are the ones getting drunk, as there is great confusion in their making an about-face at the finish line. The riders whip them maniacally, shouting, flailing and swivelling in every direction at once, as if they were galloping full speed when they were simply trying to turn in place. With each reeling run there are more and more horses without riders. For the observer, the most interesting aspect of the race turns into anticipating who is going to fall off and when. And some of the spills are, indeed, spectacular! One rider was in mid-air for half the race, suspended just above the saddle,with a wide grin and arms outstretched. Then splat, face-down right into the mud, with the others riding over and around him. Another jinete, his foot caught in the stirrup, is dragged down the entire course, and then up again and back for more.

This goes on and on through the afternoon, until fewer and fewer riders are aboard their mounts, and more and more pass out in whatever place and position they lost consciousness. This “catharsis” the townfolk explain, takes place only once a year. The rest of the time the todosanteros are sober and somber……they say.

It is all quite tam , they add, compared to the way it used to be up until a few years ago. Before, the race took place right down the main street of the village, and in addition to the goal of finishing first (and in the saddle ) there was another activity. Live roosters (customarily used for sacrifice to the Maya gods and other costumbre) were strung up by their feet above the course, dangling and squawking head down. As the horsemen passed beneath them they would reach up and jerk their heads off. The team that jerked-off more heads won. You may ask, what did they do before the Spaniards brought horses to America? The same thing, only on foot. Why do they do it, and what is the significance? The answer is : costumbre.

And in the placita in front of the church, where two large crosses used to stand (one very tall, made of wood and the other shorter, made of stone) there is a Mam-style merry-go-round, with beatifully hand-carved and decorated horses and several marimba bands. Another main attraction here are the tumultuous bailes de los conquistadores. The costumes are unbelievably elaborate for the dances of the moors, the deer, the bulls, and the Spanish cortisans, with full head masks, whish themselves are museum pieces.

Will all this is going on, there is much activity in the cemetery for this dia de todos los santos, and more events are planned for the following All Souls Day, el dia de los muertos. All cemetaries are located to the west of the pueblo, towards the sunset of the day and symbollically, of Life . The graves, many with the legendary two crosses, are gaily decorated with flowers, plants and gifts. Prayers and festivities go on, and aguardiente is poured over the graves ranging from elaborate tombs to simple mounds of dirt-to liven up the souls of the inhabitants.

All in all, it is quite an unusual fiesta-fun fascinating and intriguing. And is not confined to Todos Santos alone . There is myriad of other celebrations taking place at the same time in other pueblos throughout Guatemala. Although traveling back in time is wonderfully possible in this ancient land.

The Streets of Marrakech