During my visit it occurred to me that a Hall of Fame is really about commemorating something — a sport, a team, a culture, a tradition or an art form – Halls of Fame ultimately pay a tribute to any given genre with memorabilia to help us all celebrate something we enjoy, something we cherish and something we are passionate about.

Whether you are a devotee of a certain type of music, pro-wrestling, kids toys, freshwater fishing, fast vehicles or air and space exploration, there is a ‘Hall of Fame’ out there waiting to be discovered and explored. However, if you’re wondering if there is a Reality TV Hall of Fame, you’ll be very disappointed – but The Craft Beer Hall of Fame will open in August 2016 – now that will be worth toasting. Meanwhile we have put together some of our favourite well-known, and not so well-known, ‘Halls of Fame’ that are worth visiting.

The main floor of The Motorcycle Hall of Fame celebrates famous inductees—the heroes of the track, road and trails who have elevated the sport to new heights. This little known museum has a significant New Zealand connection as our very own Burt Munro was inducted here in 2006. During his life, Munro’s accomplishments were little known outside a select group of motorcycle enthusiasts. With the release of the movie, The World’s Fastest Indian in 2005, Munro suddenly became a cult hero in New Zealand. In 1967, Munro, from Invercargill, coaxed his beloved streamlined Indian Scout to 183.58 mph. That set a record in the category of “streamlined motorcycles under 1,000 cc”. Which to qualify, he made a one-way run of 190.07 mph, the fastest ever officially recorded speed on an Indian motorcycle. This is a shrine to the motorcycle. www.motorcyclemuseum.org 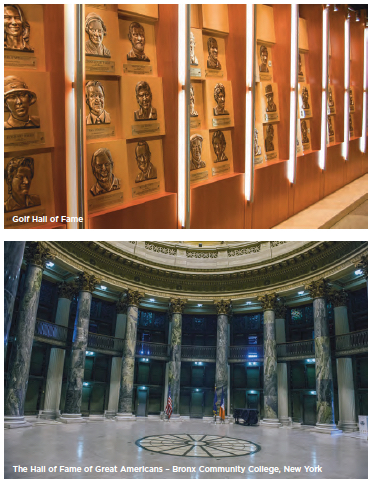 This Hall of Fame was founded in 1992 as an arm of the Herreshoff Marine Museum where yachts were built for eight consecutive America’s Cup defenses between 1893 and 1934. Nearly 80 legends of The America’s Cup have been inducted into this Hall of Fame, including 11 New Zealand inductees, such as Sir Peter Blake and Sir Russell Coutts. Candidates eligible for consideration include members of the crew, designers, builders, syndicate leaders, supporters, chroniclers and other individuals of merit. The collection includes plaques honouring the inductees; half-hull models of challengers and defenders; artifacts including spars, steering wheels and tank test model hulls; all special exhibits about The America’s Cup. www.herreshoff.org

Located in northwest Wisconsin, the highlight of the museum complex is a landmark “Shrine to Anglers” whichis a half city block long and four and one-half stories tall, of concrete, steel and fibreglass, hand-sculpted into the likeness of a leaping fish (a muskellunge). Its gaping, open jaws, accommodate about 20 people and reveals a wonderful panoramic view of Lake Hayward, the city of Hayward. The “Big Musky” sits atop an 88,000-gallon pond. The adjacent four-building museum complex houses over 50,000 sport fishing historical and vintage artifacts ranging from lures, rods, reels and accessories. Additionally, there are over 300 mounted fish and about 1,000 antique motors on display. www.freshwater-fishing.org

Mint condition aircraft in a mint condition museum – a Spitfire Mk. XVI, a Navy F6F Hellcat and an A-4 Skyhawk jet – these beautifully restored airplanes help you appreciate the complex technology represented in the classic military aircraft of World War II, Korea and Vietnam. A journey through the history of flight begins as you stand  beneath a model of the Montgolfier brothers’ hot air balloon of 1783 – the first manned vehicle in recorded history to break the bounds of gravity and lift humans above the Earth. The Museum’s enthusiasm for the display of space age technology, like the desire to journey to the stars, may never be finished. www.sandiegoairandspace.org 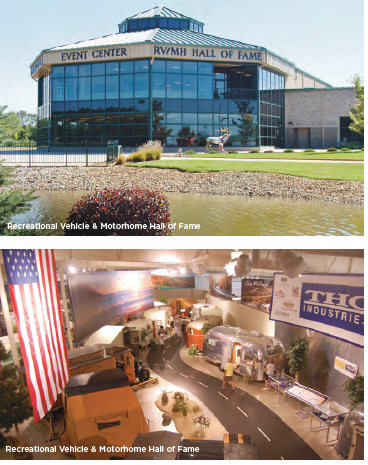 In this Hall of Fame you can touch everything on display and play the games as well. They just go together…bright colours, flashing lights, bells, buzzers, chimes along with fanatics and ordinary families trying to beat the beloved

pinball machine. The Pinball Hall of Fame is the public side of The Las Vegas Pinball Collectors Club and showcases over 200 pinball games in perfect working order from nearly all areas of pinball history. It’s just down the road from the “LV Strip”, on the famous Tropicana Avenue, across the street from The Liberace Museum, and of course you don’t have to just look…you can be a Pinball Wizard too! www.pinballhall.org

The RV Founders Hall displays trailers, photos and memorabilia reaching back to the 1920’s and 1930’s. The museum presents chronological and technological advancements in the industry from before WWI to the present. Included in the exhibits is a 1913 Earl Trailer and Model T Ford believed to be the oldest non-tent travel trailer in existence, a 1916 Cozy Camper Tent Trailer, one of the first trailer models to be commercially produced and built in Indianapolis, along with a 1931 Chevrolet Housecar owned by Mae West (but chauffeur driven) which was built for Paramount Studios to present to Miss West when she left vaudeville to make movies for the studio in 1931. www.rvmhhalloffame.org

Opened in 1995 on the shores of Lake Erie in Cleveland, Ohio, this Hall of Fame has gone on to be one of the most revered and visited museums in America. The facility officially opened on Saturday September the 2nd, 1995 with the evening culminating with a benefit concert at Cleveland Municipal Stadium. An incredible roster of the rock and roll greats performed – and what a gig it was – Chuck Berry, Bob Dylan, Al Green, Jerry Lee Lewis, Aretha Franklin, Johnny Cash, The Pretenders, John Fogerty, Lou Reed, Iggy Pop, George Clinton, The Kinks, John Mellencamp, Bruce Springsteen, Booker T. and the MGs, Eric Burdon and Martha Reeves. Since the Museum’s opening, The Rock and Roll Hall of Fame and Museum has welcomed nearly eight million visitors from around the world. www.rockhall.com

Founded in 1996, this Hall of Fame was relocated from the Gunn Center for the Study of Science Fiction at the University of Kansas to its permanent home at EMP Museum at the Seattle Centre in 2004. It honours the lives, work, and ongoing legacies of science fiction and fantasy’s greatest creators. It features people such as movie directors Stanley Kubrick, Steven Spielberg and Ridley Scott, Star  Treks Gene Roddenberry, futuristic music genius David Bowie, and authors such as Arthur C. Clarke, Jules Verne and H. G. Wells. Will our very own Sir Peter Jackson ever be an inductee…yes, more than likely. www.empmuseum.org

Located at World Golf Village in St. Augustine, Florida, this Hall of Fame serves as a steward of the game through engaging, interactive storytelling and exhibitions featuring artifacts, works of art, audio, video and photography significant to the history of golf and its members. Their mission is to preserve and honour the history of the game of golf and the legacies of those who have made it great. Another New Zealand connection here is inductee, Sir Bob Charles, the first left-handed player to win a golf major – the British Open in 1963. He was inducted into the Hall of Fame in 2008. www.worldgolfhalloffame.org

Located within the 44.6 acre tree-lined Bronx Community Campus in New York City, this once famous Hall of Fame is rarely written about and hardly ever visited, the ‘Almost Forgotten’ Hall of Fame of Great Americans is notable for being the very first Hall of Fame in the U.S.A. – a landmark monument that was founded in 1900 and formally dedicated in May 1901. The sweeping Neo-classical semicircular building is built on the crest of the highest point in New York City, providing panoramic view across the Harlem River to the Cloisters in Fort Tryon Park. The principal feature of the Hall of Fame is its 630-foot open-air Colonnade, which houses 98 works by distinguished American sculptors, bronze portrait busts of the honorees. The building is open daily from 10:00 am to 5:00 pm for self-guided tours. 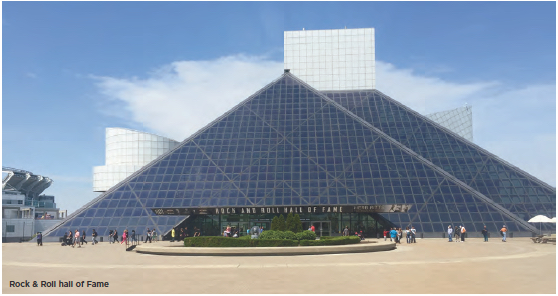