Did you know that thousands of sea turtles migrate annually from the shores of the Arabian Gulf, the Red Sea and Somalia to lay their eggs on the Sultanate’s shores?

The best time in fact to witness this beautiful phenomenon is now. July –October is the peak time for turtle watching in Oman as approximately 20,000 turtles or more lay an estimated 50,000-60,000 eggs each year in the Sultanate.

At night carrying their heavy shells on their backs these turtles drag themselves out of the water to the beach. Strenuously and with great difficulty, they dig a hole in the sand using the tips of their paws so as to bury their eggs and then return to the sea. After about 55 days, the eggs hatch and baby turtles come out to start the most dangerous journey of their lives, trying to avoid hungry foxes, crabs and birds and pushing their way towards the sea where they can find safety in the waters. Watching the turtles’ night dash to the sea is among the most popular tourist activities, especially at Ras Al Hadd Turtle Reserve.

Ras AI Jinz is a fishing village located in the Ras AI Hadd Turtle Reserve on the eastern shores of the Arabian Peninsula. 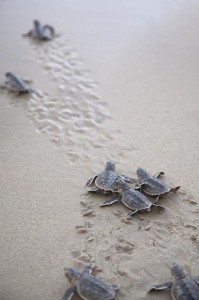 The Ras AI Jinz beach is world renown for the nesting endangered green turtle, Chelonia mydas, probably the most important nesting concentration on the Indian Ocean. This is the only place where the public can watch the nesting process of these amazing sea giants.

The Turtle Reserve was established by Royal Decree in 1996. The Ras AI Jinz Turtle Centre, an ecotourism project, was established in 2008 to help monitor the fascinating and amazing nesting processes of these giants of the marine turtle world.

Whilst the Centre cannot control the natural threats to marine turtles such as, birds, crabs and fish preying on the hatchlings or adult turtles being attacked by sharks or foxes predating on the eggs and hatchlings the Reserve, in conjunction with the Ministry of Environment and Climate Affairs can educate and control the human induced threats, such as:
• Commercial harvesting for turtle meat and shells
• Loss of Habitat
• Disturbance while nesting
• Litter/pollution such as plastic bags and bottles, glass bottles, soda cans, tissues, fishing line, rope and so on
• Throwing any rubbish into the sea or onto the beach
• Artificial light such as flash photography and car lights
• Vehicles driving on beaches

The centre conducts guided excursions every night to view the turtles and witness the nesting process. All the Centre guides have a commitment to the preservation of the turtle and are very knowledgeable on the topic.

Overnight tours are available to book through your local travel agent or visit www.tourismoman.com.au for more information. For flights to Muscat, keep an eye out on the soon to be released Early Bird Specials with Qatar Airways, Oman Air, Emirates and Etihad Airways.