The hustle and bustle of Birmingham seemed a million miles away as I made the short journey south towards Warwick, the county town of Warwickshire. I was looking forward to investigating this region that is referred to as Shakespeare’s England…Warwick Castle, Royal Leamington Spa, the River Avon and Stratford-upon-Avon all lay within mere miles.

First things first…find my recommended B&B accommodation and check in. What I expected was quaint, homely accommodation and warm, friendly hosts; what I hadn’t anticipated was the incredible location. There I was literally metres from the ancient stone walls surrounding Warwick Castle. What a bonus! There is a good array of accommodation in Warwick, from hotels to guesthouses within the town boundaries to country estates and lodges on the outskirts. 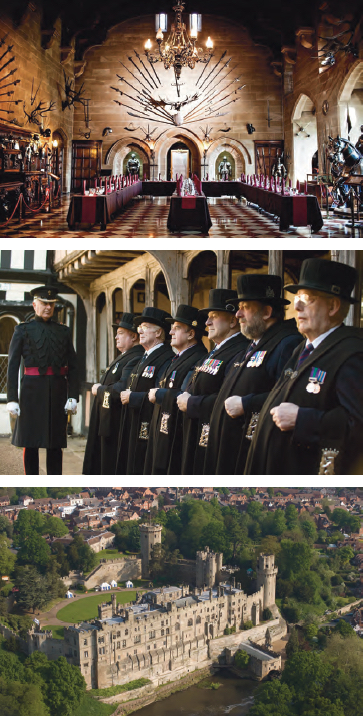 Janet and Stuart lived up to my perceived notion of the ideal hosts – polite, affable, warm, inviting and generous. Janet showed me to my upstairs room, each step we took evoking a creak from the 500 year old wooden treads and floorboards as they cheerfully greeted yet another visitor. I have no idea whether or not the cottage is supposed to be haunted, but I did have a vague notion that I was being ‘welcomed’. There was a lovely atmosphere that at once made me feel right at home.

The Grade II listed property belonged to the Early of Warwick and was actually sited within the castle boundaries at one time. The 300-year old yew tree in the garden, now protected by a preservation order, would once have been used to fashion bows and arrows. The seven ensuite rooms are named after the wives of various Earls of Warwick, and there’s a handy family tree at the foot of the stairs. I loved that Janet has placed a bear in each room given that the bear is the county symbol.

My room overlooked West Street and was bedecked in a magnificent 4-poster bed. Creature comforts were provided in a very adequate ensuite, hot drink facilities on the nightstand, an antique dresser and wardrobe and television. Janet showed me the honesty-bar fridge on the landing, as well as the rear garden.

I hadn’t done my homework – I learned that very quickly. Kaiser Chiefs were performing at Warwick Castle that night, and was now sold out. Bugger!

Thankfully, the air was still that night and the music carried over the castle walls, so I can honestly say I heard Kaiser Chiefs play in Warwick, even though I didn’t lay eyes on them!

The location of Park Cottage was perfect for exploring…minutes from the racecourse, metres from the Castle, and a short walk to the centre of the town. 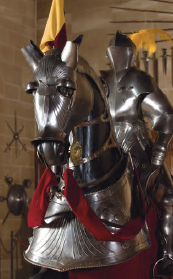 My evening stroll led me up West Street, a wide leafy street that showcases many fine examples of Tudor architecture and almshouses that escaped the fire of 1694, as well as Gothic examples. There are also examples of 18th Century architecture, the result of rebuilding after the fire, the Shire Hall boasting Corinthian columns and carved garland friezes.

Head to Mill Street to see an impressive display of pre-fire architecture. The stocks in the garden of 55 Mill Street are said to have been used on those who refused to pay the toll for crossing the old bridge! In the suburb of Bridge End is Templar’s Cottage, a reference to the Knights Templar who were given a manor here in the 12th Century.

Market Place, home to shops, pubs and restaurants, and a thriving weekend market is also home to the County Museum, which was sadly closed, but I’m told there’s a huge Warwickshire bear on display.

I grabbed a delicious takeaway Biryani from Spice Hut and headed back for an early night.

Bright and early the next morning, I ventured downstairs and was offered my breakfast alfresco instead of in the dining room. Perfect! Birds twittered while I devoured my Eggs Benedict, hearty slices of toast and marmalade and freshly brewed coffee.

On closer inspection of the town, I discovered a fascinating blend of modern businesses operating from behind centuries-old walls and window panes. The spire of St Mary’s church dominates the skyline and the tower offers incredible views of both the town and the castle. Lush hanging baskets bloomed everywhere, hedges were neatly trimmed and paintwork was generally immaculate – this is a town that is cared for by the townspeople.

The timber-framed buildings of Leycester’s Hospital date from the 14th Century. Lord Leycester acquired the buildings in the late 1500’s and turned it into a hospital, a purpose it still serves today. 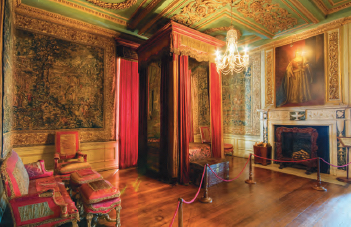 Warwick Castle was constructed in 914 on an outcrop of rock overhanging the River Avon. This is 1,100 years of history that you can take in within a matter of hours! Visitor entry is through the Stables Courtyard, past the ballista and through Clarence Tower into the central courtyard. One can ascend the towers and ramparts, investigate the Great Hall and state rooms or wander further afield to the Birds of Prey Mews where you can witness eagles, buzzards and an Andean condor in flight.

For something just a tad different, consider a stint of Medieval Glamping. Daily shows at the Castle include the trebuchet catapult launching a flaming fireball, a battle of jousting knights, and a resident archer showing off his accuracy and skill. While the kids may think history is boring, it’s brought to life here – there’s a castle themed adventure playground, the mysterious and eerie goal for the ghoulish, and an enchanted riddle to solve in Princess Tower.

It wasn’t hard to imagine life in Warwick all those years ago. History is beautifully preserved here, and presented in such a way that it doesn’t clash with modern day conveniences. Rather, the townspeople have cleverly worked out how to blend medieval history into an enchanting experience.

Gayle flew to the UK in Business Class with British Airways. www.ba.com

While in Warwick, Gayle stayed at Park Cottage B&B, www.parkcottagewarwick.co.uk

Sunrise from the Roof of Africa