The Dutch Caribbean island of Aruba lies 15 miles north of the South American coastline, benefitting from year-round sunshine, an average temperature of 32 degrees and a cooling breeze. Located on the edge of the hurricane belt, with a nine mile stretch of award-winning pristine beach, turquoise seas, colonial Dutch architecture and a Latin vibe, Aruba is a delightful alternative Caribbean experience.

From a refreshing local beer to satisfy the thirst as the temperature soars to an exotic cocktail to toast a spectacular sunset, Aruba offers a dazzling choice for those who love to raise a glass on holiday. 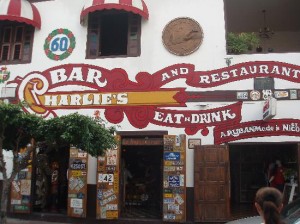 For those seeking a classic venue to quench their curiosity, head for the island’s second city of San Nicolas and the renowned Charlie’s Bar. San Nicolas has until recently been eclipsed by capital Oranjestad but a rejuvenation programme has breathed new life into its historic streets. But there has always been Charlie’s Bar, now run by Charles Broun III, grandson of the original owner, and better-known as ‘Charlito’.

The bar was established in 1941 and was a focal point of the city when San Nicolas was home to a thriving oil refinery, which played a key role in fuelling the Allied effort during the Second World War.

Later, it adapted to cater for the invasion of tourists flocking to the island and who began a tradition of leaving behind odd souvenirs and mementoes. Today, every inch of Charlie’s Bar is crammed with an enormous variety of eclectic treasures from all over the globe – a living history of San Nicolas, echoing the footprints of all those who have enjoyed a visit there.

Says Charlito: ‘My sister and I are privileged to be able to continue this family tradition. Providing good food and drink, served with genuine care in a fun, friendly atmosphere is always our goal. Come and see us for fabulous fresh fish, jumbo shrimp and prime steaks and try our signature ‘Honeymoon’ hot sauce and our famous ‘Boozer Coladas’.

An even older tradition in Aruba is the rum shops, started a century ago and, fairly obviously, serving rum, just about the only alcohol then available. It was also a social centre for the local community, a role they still continue to fulfil today. But cheap, ice-cold beer is now the staple drink and some of the more modern establishments offer a barbecue or other hot food and they are a great place to soak up a true Aruban atmosphere. 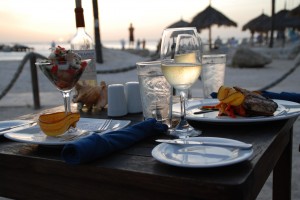 Aruba’s multicultural heritage is also reflected in locally-produced drinks. Aruba Ariba is the island’s most popular tropical cocktail, created in a renowned hotel bar in the early 1960s and featuring coecoei, a local liquor made to a centuries-old recipe. Adding to the kick are vodka, rum, crème de banana, a splash of grenadine and topped off with Grand Marnier.

In addition to coecoei, which combines the sap of agave leaves, rum and can sugar, Aruba also produces its own signature version of ponche crema by combining egg yolks, cream, rum and a variety of spices. This rich and smooth eggnog-like drink is especially popular at Christmas.

Fresh coconut water, prepared to order and served right from the shell with a straw is a must. Under the mid-afternoon sun, it’s a refreshing and healthy treat. Fresh fruit shakes are another healthy option, blended with locally-grown fruits, such as mango, melon, papaya and tamarind.

Wine is, surprisingly, also produced in Aruba. Nestled in the island’s cunucu (countryside), Vincent Kock has cultivated 600 square metres of land for vines and produces 400 bottles a year. 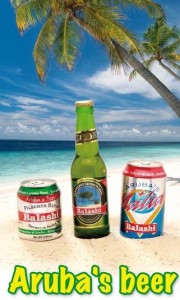 The grapes are mainly Arab in origin, suited to hot climates, but they are also mixed with vines from America and France. In another twist, Vincent blends wine with island fruits like the cashew fruit and Aruban cherries to produce a markedly ‘fruity’ wine.

Beer is also brewed on the island. The Balashi National Brewery produces the crisp and refreshing Balashi beer, golden in colour and popular with locals and tourists alike.

A perfect island cocktail is infused with Palmera Rum, blended and bottled by hand at a factory in Oranjestad for the last 45 years. Offering 12 different rum blends, the most popular with visitors is coconut rum, while local remain loyal to the Palmer Rum original, known for its oaky sweetness, with hints of vanilla.

And if all else fails, opt for a Balashi Cocktail, the name affectionately given by Arubans for the island’s drinking water – produced by a state of the art desalination plant which purifies and filters Caribbean seawater!

For more information about Aruba, go to www.aruba.com

Get Under the Skin of KwaZulu Natal