Adventure tourism leader AJ Hackett Bungy will celebrate 25 years of bungy in spectacular style with a 25-day long calendar of events, promotions and competitions culminating in a ‘not-to-be-missed’ party on November 12 2013.

With pre-birthday fun kicking off on October 18, #25yearsofbungy will celebrate the many achievements and successes of the multi-award-winning adventure tourism company, known worldwide as the ‘pioneers of bungy’.

As the official ‘World Home of Bungy’, Queenstown’s historic Kawarau Bridge will be the focus of celebrations.

From humble beginnings in 1988 when AJ Hackett and Henry van Asch were first granted a temporary consent from the Department of Conservation to set up the world’s first commercial bungy jumping operation at the bridge, AJ Hackett Bungy New Zealand has become a world-renowned adventure tourism company recognised for its innovation, edgy company culture and constantly-evolving range of products.

AJ Hackett Bungy co-founder and director Henry van Asch said he was “overwhelmed and incredibly proud” to see the company reach the quarter of a century milestone.

“For 25 years AJ Hackett Bungy has encouraged people to step outside their comfort zone, balancing the perceived risk of jumping, swinging and now zipping from a great height, with the most stringent of safety measures,” he said.

“It’s hard to believe it’s been that long since AJ and I dreamt up the idea to jump off structures around the world attached to a bungy and then start a commercial operation at the now world-famous Kawarau Bridge. 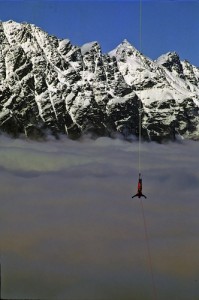 Heli Bungy in front of The Remarkables

“It’s been a fun, interesting and incredible ride, during which time we’ve become not only one of the best-known brands in New Zealand, but also the world,” said Mr van Asch.

“Bungy’s an iconic ‘must-do’ adventure activity and we look forward to welcoming people for many more years to come.”

“There are always plenty of new ideas coming up and my business partners and I are very happy to have a great team around us to make them possible and a reality for our valued customers.

“I for one can’t wait to see what fun, crazy new products and ideas we come up with,” Mr van Asch said.

The #25yearsofbungy promotion will start on October 18 2013 with an advent calendar-style promotional campaign featuring quirky and unique themes, discounts and challenges every day.

Prizes including bungy jumps, limited edition 25th birthday T-shirts and more will be up for grabs each day.

“There will be plenty of details and some great announcements nearer the time,” said AJ Hackett Bungy Marketing Manager Katie Macpherson.

People can follow celebrations on the AJ Hackett Bungy Facebook page and are encouraged to use the #25daysof bungy hashtag on social media sites.

On birthday day November 12, students from local primary and high schools will be joined by teachers and spectators to kick start celebrations at the Kawarau Bungy Centre.

Pupils aged from 10 to 13, whose names will be picked out of a hat, will jump from the bridge, embracing their fears and completing their first ever bungy jump.

A number of teachers will also be egged along by their pupils to take the plunge.

The local schools event is an annual tradition for the iconic adventure tourism company.

Throughout the day and into the night fun birthday activities will include bungy stunt jumps and an invite-only event in the evening for VIPs, media and staff.

Bungy jumping was ‘born’ when AJ Hackett saw a video of Bungy jumps performed by the Oxford University Dangerous Sports Club. Realising that others would gain a huge sense of achievement and large adrenalin rush, AJ and friend Henry van Asch set about developing and testing Bungy cords with the help of Auckland University scientists.

The pair then developed a Bungy Code of Practice,  providing the framework for the New Zealand/Australian Bungy Jump Standard — the company was the first in the world to be awarded the ‘S’ Mark for Bungy jumping.

Despite the sceptics, AJ Hackett Bungy opened for business with a 30-day licence from the Department of Conservation.

AJ Hackett Bungy is an iconic New Zealand tourism brand and prides itself on being a world leader in challenge and adventure, continuing to exceed expectations for staff, jumpers and the tourism industry.