A Fragrant Introduction to Oman

Frankincense trees have been growing and ebbing its liquid amber for centuries into Oman, close to Yemen’s border. Caravans loaded with its crystallised nuggets would set off on week’s long adventures north towards the Mediterranean basin, into Egypt’s lap as it once was more valuable than gold at a time when fragrance was scarce and hygiene reflected ones status.

Intermingling in the desert air with the spices being shipped in from the Far East – cinnamon, cardamom and cloves, the ancient trade route was indeed the Fragrance Route of Arabia.

Being home to the some of the world’s best and sought out ingredients, it deems logical that the House of Amouage arose out of the very same desert sky.

Created in 1982 under the guidance of the reigning Sultan, Sultan Qaboos bin Said, The House of Amouage was initially set up to stir up the imagination and soul of Arabia’s rich past in antiquities. Using the world best ‘nose’, parfumeur Sir Guy Roberts was selected to craft and bottle the first essence of Arabia – Gold.

With tutelage from Dior, Roberts was prepared for this adventurous journey and released a bold scent encased in Gold to reflect the opulence and wealth of Oman’s past.

Next in the range came – Dia, latin for day. Bright and promising just as the early years were under the new Sultan, one couldn’t help but notice the reference to Oman’s national symbols, the Khanjar and Oriental architecture, in the unique design of the bottles. And so began Amouage’s legacy to Oman’s fragrance range. 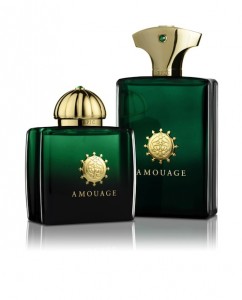 These days The House of Amouage has now been privatised while the inspirational journey through time and history continues to unravel through scent via the dynamic Hong Kong-born Creative Director’s, Christopher Chong, lead at the helm. Chong, himself takes inspiration from his creative past, delving in classical music and opera, being a classically trained baritone, as well as his new passion, the Middle East.

However, all has not been lost due to the change of hands and new global reach. The fragrances remain just a magical as they were at the beginning.

The deep red of Lyric is to symbolise the importance of its most important note – the Oman rock rose, which blossoms once a year in the high mountain ranges of Jabal Akhdar.

The spicy head notes in Epic are a nod to the Legends of the Silk Route travelling from the Far East.

Lavishly raising from the quick sands of the desert, towering over an Oasis of gold and hedonism is Ubar – the famous lost city referred to by Lawrence of Arabia as the Atlantis of the Sands.

Not to be forgotten, Interlude, clouds your thoughts and takes you back to the very beginning of the caravan routes through Arabia as Myrrh and Frankincense embraces your soul much as they did during embalming rituals in the past.

More recently, the Opus Library Collection has been added with accompanying Roman Numerals, speaking in volumes of a journey from the rich past to the progressive present.

The House of Amouage’s range of fragrances have often been dubbed the ‘Fragrance of the Gods’ and not simply due to the high price of this luxurious good. Rather because of its unearthly effect over ones mind and soul after just one sniff. Perfume writer, Luca Turin, was not joking when upon smelling Ubar said: “Use it carefully, for once you spray it on there’s no going back.”

The House of Amouage fragrances can be bought in David Jones across Australia. Or if in Oman, visit their recently opened museum and store. For more information visit: www.amouage.com  or www.tourismoman.com.au

Peek into the heart and soul of Arabia at the ‘Magnificence of the Middle East Ball’ which will be held in Sydney in November – Oman Tourism are the proud sponsors of the event alongside the Arab Bank, Etihad Airways, BMW and Cerrone. The glamorous event will not only showcase the current fashion trends by featuring the new Spring/Summer Collection by the renowned Lebanese fashion designer Basil Soda rather it will further entice you by the smells and flavours of the region through a decadent degustation menu created by Australia’s top talents including Shannon Bennett, Matt Moran, Shane Delia and Vincent Gadan.  To purchase tickets, contact:Chefshowcase@georgekhouzame.com