The Kingdom of Cambodia

Welcome to the Kingdom of Cambodia

Situated at the confluence of three rivers, the Mekong, and the general Bessac Tonle Sap Lake, the capital becomes “The Pearl of Asia”, a hectic city, full of imaginative modern reconstruction which has managed to keep its architectural French heritage.

Do not miss visiting:

Built in 1866 by King Norodom on the edge of the Tonle Chatomouk Phnom Penh and then called Preah Reach Borane Vang Chatomuk Mongkut. The official inauguration took place February 14, 1870.

It features many buildings inspired by the Khmer culture and art, all oriented to the east according to the sacred rules of construction.The exteriors are painted in royal yellow. This work was carried out by French and Khmer architects. 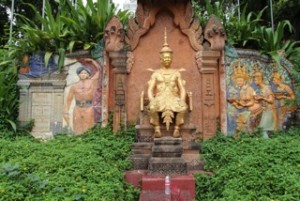 Considered the main attraction of the city, an area of about 16 hectares, it offers visitors great gardens and several palaces and pagodas – we never tired of contemplating them.

Protected and enclosed behind a high wall, built in 1866 during the reign of Norodom, also painted in royal yellow and within sight of the roofs of Khemmarine castle, are the pavilion Chan Chhaya, the Preah Keo Morakat and the Tévia Vinichhay.

Among the most visited Royal Pagodas, the Pagoda of the Emerald Buddha (Wat Preah Keo, better known as the Silver Pagoda) is the shrine of royal ashes. It was built by King Norodom from 1892 to 1902. Seen in the courtyard, his equestrian statue is shown dressed as a French general. It could be the equestrian statue of Napoleon III, whose head was replaced by King Norodom.

The interior of the temple offers visitors about 1,600 rooms to discover, religious objects, Buddhas, statues inlaid with diamonds, rubies. Gold items, bronze, silver, precious stones and all kinds of objects evoke a rich and glorious past.

Take the time to browse inside the cloister, the walls of the outer gallery which include frescoes painted between 1903 and 1904 telling of episodes from the Khmer version of the Ramayana, called Reamker. 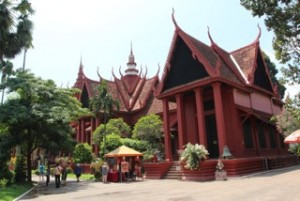 The National Museum of Phnom Penh and its magnificent mall, occupies a vast ocher-coluored building officially opened in 1918 and offering visitors thousands of years of Khmer art from the 4th to 13th c., to discover in four galleries, a remarkable collection of sculptures and pre-Angkorian and Angkorian objects. The whole collection is kept at this  beautiful terracotta building bristling with naga (cobras Hinduism).

One of the most visited by Cambodians and foreigners, this museum is located in the heart of Phnom Penh. It was formerly a high school that was converted in 1975 to a Detention Center, known as the Security Prison name 21 (S21) by Pol Pot Security Forces.

It is now recognised as the largest center of detention and torture in the country. More than 17,000 prisoners were held there and then be transported to the extermination camp Cheoung Ek and be executed. 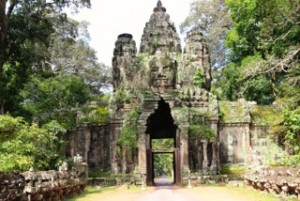 The Charnel Cheoung of Ek

In this old longan orchard, the remains of 9,000 people were exhumed in 1980. These are the bones of those who have gone through the famous S21, the school prison where the Khmer Rouge tortured their prisoners.

Men, women, children … 17,000 people ended their days here, stunned to sod, squashed against a tree, slaughtered with machetes … all rather than wasting a bullet.

Of the 129 tanks, 43 have not yet been excavated; bones, teeth, clothing of the victims are still in the ground, surfacing as the rains and erosion do their job.

As we advance slowly in this bumpy field where each hole is a grave, each piece of fabric a memory, following the explanatory panels coldly describe what happened to all those who were brought here. The place is calm and quiet, and the atmosphere freezes the blood. On a tree (nicknamed the “Killing Tree”), a pattern, here we murdered children.

In the center, a large glass stupa contains the skulls of the dead arranged by the sex and age of the victim. Ground pile clothes that have been found. You can contribute to the collection by reporting the effects you will find when you visit the polls under that provision.

Visit the graves of Choeung Ek after S21 captures the genocide that took place in Cambodia in all its magnitude. 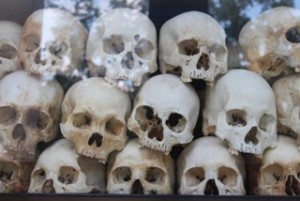 Was inaugurated in 1958 to commemorate the regained independence of Cambodia.

Created by the famous Cambodian architect Vann Molyvann, the building whose shape represents a lotus flower in bud, is decorated with Naga (cobra with several heads) and is reminiscent of the shape of the towers of Angkor Wat.

The Central Market in Phnom Penh fits inside a colonial building in the heart of the city. Its Khmer name “Psar Thmay” means “new market”.

Psar Thmay was built in 1937 during the French colonial period, in an Art Deco style and its facade was painted in a beautiful yellow ocher. The market consists of four wings overhung by a central dome. Inside and outside the complex you will find everything you could imagine: electronics, watches, bags, suitcases, food, jewelry, clothing (from cheap t-shirts to Khmer Krama (traditional cotton scarves), and pseudo-antiques. 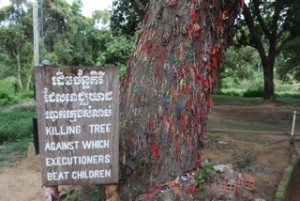 This market began to be frequented by foreigners during the 1980s, at a time when most of the foreign community in Cambodia was Russian, hence its name.

Certainly it does not equal the architectural beauty of the central market, but there are a selection of items – souvenirs, trinkets, sculptures and silks – wider and more varied, as well as jewelry and gold. This is also the place to find pretty fabrics.

The new Night Market Phnom Penh located near the banks of the river is a tourist place offering a wide range of handicrafts such as Cambodian silks, trinkets and other souvenirs.

The night market, gay and festive, delight everyone, big or small, tourists and residents believed and is a major asset to the city of Phnom Penh, especially as the majority of goods that are found there made locally, not imported.

Quality, local products made by traditional methods, what better for a Cambodian market …

Several cruises are organized along the banks of the river. They offer stunning and interesting view of the city.

The trip, lasting 1 to 3 hours, is to raise the Tonle Sap along the waterfront, allowing tourists to admire, among others, the Royal Palace, the National Museum, parks and the urban landscape of Phnom Penh. Then cruise reverses direction to head the Mekong, where pretty fishing villages with stilt houses dot the banks of the river.

For cruises lying sun, registrations are between 16h and 17:30

The banks of the Tonle Sap, more commonly known as Sisowath Quay, welcome amount of bars and restaurants. These establishments generally occupying beautiful colonial mansions of the nineteenth century, attracting an international clientele. This is also where most of the major national celebrations take place, such as the Cambodian New Year in April, and the feast of Water, in November.

Leave the hustle and bustle of Phnom Penh behind as you jump in a tuk-tuk (a kind of auto rickshaw) and travel over the Japanese Bridge and Into the countryside. Pass through rural settings and by roadside stalls selling everything from paper-mache animals to steamed corn. Then board a barge That Will take you across the river and the island of Koh onto- Dach, Also Known As Silk Island. 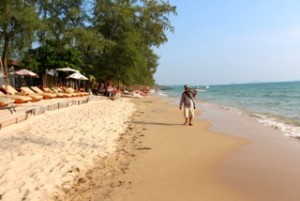 The town on Silk Island is typical of Many rural Cambodian villages with houses built up high on stilts. You Will See people underneath the houses, silk weaving on hand looms and dying it vibrant colors. See how the silk is Transformed from a cotton wool-like texture Into thread is homemade spinning wheels made from bicycle parts. Try using the looms to weave the silk Ikat Into distinct patterns, or wander the town and meet the locals.

Sihanoukville borders the blue waters of the Gulf of Siam. It is the first deep water port in Cambodia and also its only real resort. It was renamed in honor of Norodom Sihanouk, the former king of Cambodia.

Easily accessible from Phnom Penh by a very good road (about 4 hours by car), Sihanoukville is popular with foreign tourists and Cambodians. There are also enough beaches to help find peaceful areas. These sandy beaches lined with pine trees or coconut trees stretch over several kilometers. The best are in the South, in the district of Ocheteal Beach.

Apart from swimming, it is possible from Sihanoukville to make trips of half a day to a day to discover the natural wealth of the region:

The fall of Kbal Chhay. : Storey waterfall and ponds in a thick jungle. 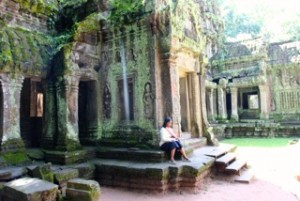 Siem Reap means defeat. It evokes a battle between the Siamese and Khmer armies which saw the defeat of the latter. The province was returned to Cambodia in 1907, after more than a century Siamese control.

Siem Reap offers all hotel categories, from modest to luxurious. Many charming structures allow to have a pleasant experience, especially since the choice is vast for restaurants and bars. The nightlife in Siem Reap Pub Street is bustling.

It is from the Siem Reap Angkor tours and floating villages on the Tonle Sap are organized. Inside the city, the Angkor National Museum is the main site to visit. It is here that are exposed iconic art of the ancient Khmer kingdom and temples models. Visiting this museum is a perfect introduction to the Angkor civilization and Khmer art, highly recommended before going to the temples of Angkor.

From thousands of temples, there are three that are emblematic: Angkor Wat, the largest religious building of the Kingdom; followed Bayon, one of the most enigmatic, with its huge stone faces; and Ta Prohm and Banteay Srei, caught in a tangle of roots of kapok trees in an adventure of Tom Raider.

The second capital of Angkor was built by Rajendravarman around 960, with a state temple in Pre Rup. He also built a temple, the East Mebon, on an artificial island that was the center of the Eastern Baray and the marvelous temple of Banteay Srei. 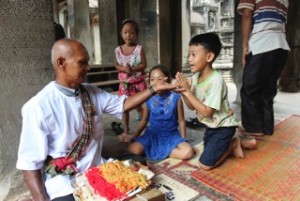 In 1050, his successor built a new state temple, most impressively, the Baphuon. Successive rulers left little monumental buildings, and it was not until the arrival in power of Suryavarman II, in 1113, that began the last great phase of édilitaire site. It is indeed the builder of the greatest of all Khmer monuments, Angkor Wat, dedicated to Vishnu and located inside a large compound. The death of Suryavarman II, which occurred in 1150, was followed by a period of internal strife and external pressures that culminated in 1177 with the sack of Angkor by the Cham. The situation was restored by Jayavarman VII, who celebrated his military success by creating yet a new capital at Angkor Thom, and launching an unprecedented building campaign. His state temple was the towering Bayon, dedicated to Buddha.

Tonle Sap Lake is a very important source of life for Cambodians. Located a few kilometers from Siem Reap, it is a living lake. It evolves with the floods depending on the season. It is powered directly from the Mekong and life is organized on the edge but also on the lake.Entire fishing villages  live up and down the banks. Others live on houseboats. Most fishermen living in this part of Cambodia are Vietnamese Catholics who have fled their country in the 70s, when the war against the US was raging.

The kingdom of Cambodia, is in the midst of rapid change. Over the past few years the number of restaurants and hotels have grown considerably and in the last year there had been a huge increase in the number of visitors. Come and see a real original as it won’t be the same in a few years.

My thanks to Mr Olivier Phuong (Director) http://www.asiaprimediscovery.com/ who was my guide and collaborator for this trip.

Video Welcome to the Kingdom of Cambodia : http://www.adriengallo.com/