Putting the O in Oman

A Roundabout Way through Arabic History

The Sultanate of Oman is touted as the Old Arabia, the place where the traditions of Arabia have survived in their purest forms. Or else as a nation where beauty is defined by curved edges, bends and twists just like the letter “O”. Not surprising the expression “going round the bend” was termed in Oman on the remote post of Telegraph Island by British soldiers during their Imperial reign coveting the spice trade in the Far East.

Hence, considering this affinity for roundness, criss-crossing the diverse landscapes of the country, a floundering amount of Roundabouts have popped up over the recent years.

Gigantic roundabout decorations are present features found on the highways and byways of other countries in the Gulf; however, it is in Oman where this art form is elevated to its highest form. From the monumental mabkhara to colossal coffee urns – fantasy and history unite.

Muscat, being the nation’s capital and largest city, has the most roads and therefore the most roundabouts. Near the Shangri-la’s Barr Al Jissah Resort and Spa, on the city’s edge, is the famous coffeepots roundabout. The pots are cleverly positioned to create a fountain pouring out its hospitality to those passing by. The waterfall backing it is just as impressive as a symbol of the value given to water in a desert environment. Naturally, the coffeepots symbolise the Arabian tradition of hospitality, being a warm welcome to visitors. Coffee is frequently drunk across the nation, its beans imported from Yemen then spiced to the Omanis delight with cardamom or cinnamon. 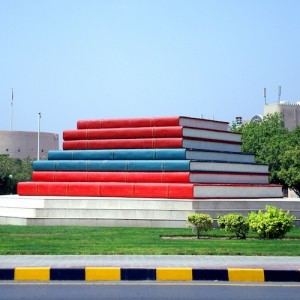 At another roundabout, a fountain presents large urns spilling over into the basin below. This one is backed by the space-age looking building, the Frankincense burner, high on a hill overlooking the city – at night the views of the Harbour and Old Town are magical. Yet again, the past and the present are seen in one fell swoop of the falcon.

Elsewhere along Muscat’s main artery is the giant incense burner, the mabkhara, an exact replica of the thousands of mabkharafound in the souvenir shops and souks around the country, not to mention the homes of Omanis. The mabkhara plays an important role in the homes of the many locals as a warden of evil spirits, while the frankincense used is the unique smell of Oman.

More practical is the clock tower roundabout near Muscat International Airport. Surrounded by large panels that present images of Oman’s rich history, it is useful as a speedy introduction to passengers arriving in the country and as a final farewell to those departing.

While Muscat has a daytrip’s worth of roundabouts, other cities in the Sultanate have roundabouts of importance too.

Nizwa, the ancient former capital is still regarded as Oman’s centre for learning, being home to the University of Nizwa and the Islamic Centre. It therefore, comes as no surprise that the city’s major roundabout features a stack of books. This is a frequent reminder to its 1,200 enrolled students, of which 88% is female, to literally hit the books.

Meanwhile in the Musandam Peninsula, Oman’s exotic exclave in the north, welcomes its visitors to the border town of Dibba with a roundabout honouring the metal handicrafts of the country – the khanjar. The beautifully engraved dagger is passed on to mark the transition from boyhood to manhood and rarely used in battle in modern day Oman.

To put a nice ring on it, why not finish your tour of Oman’s roundabouts and Arabic history by adding a global, international flavour? At Sohar, a two hour drive north of Muscat and the home of Sinbad the Sailor, there is a roundabout representing the Universe.

Add a few “ohs” on your next trip overseas. Oman is easily accessible from Australia and New Zealand with daily flights operating via Dubai with Emirates Airline or via Abu Dhabi with Etihad Airways. For more information visit www.tourismoman.com.au or contact your travel agent.