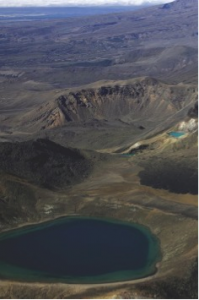 All great rides lead to Ruapehu

Discovering the rugged natural beauty and expansive awe-inspiring landscape of the Ruapehu region on mountain bike has just become easier with the release of the ‘Ruapehu Great Bike Rides’ brochure.
Designed for mountain bikers of all levels, the brochure profiles 14 tracks around Ohakune, Raetihi and National Park. Great detail is provided on starting points, grades, trail features and even tips on which way is the best direction to ride.

Looking for a challenge? Well go no further than the 42 Traverse in the Tongariro Forest Park. Endure the up-hill portion and be rewarded with spectacular views, such as at Echo Point. The 46km ride can take up to 8-hours, but it is arguably the best mountain bike ride in the North Island.

A journey on the Ohakune Old Coach Road provides insight into the challenges of early life in New Zealand. It was the critical link, by carriage, between the incomplete main trunk lines. Once the rail line was eventually completed, the carriageway fell into disrepair until Ohakune locals recently embarked on a restoration project. Bikers and walkers can now retrace the steps of travellers of yesteryear and be amazed by the 294m Hapuawhenua Viaduct, a major construction on the trail. The trail is currently being extended to Horopito. The Ohakune Old Coach Road and the associated Mangapurua-Kaiwhakauka Track are part of the Mountains to the Sea cycleway, one of seven of the New Zealand Cycleway projects.

The other major cycleway initiative in the Ruapehu region is the Central North Island Rail Trail, a proposed 60km trail from Puerora south to Ongarue and Taumarunui. This trail would incorporate the Ongaru tramway and spiral, plus feature remnants of the area’s historic logging industry. The gentle grade will make it appealing for beginner to intermediate riders.

Enthusiasts can set out on the first section of the trail, the Waioni Tram Mountain Bike Track which follows the old tram line in the Maramataha Valley, part of the Pureora Forest Park.

Copies of the Ruapehu Great Rides Brochure are free and available from the Ruapehu i-Site in Ohakune. The brochure can be downloaded at http://www.visitruapehu.com.

Details on the New Zealand government cycleway projects can be found at http://www.tourism.govt.nz

Cycle Event – Waitangi Day, 6th February: Just around the corner is the 2XU Ruapehu Cycle Classic. This is the fourth consecutive year of this road race, which starts in Ohakune with cyclists embarking on a 160km spectacular course around the Desert Road and Central Plateau. Majestic Mt Ruapehu keeps a constant watch over the race as the riders complete a loop around the mountain.
http://www.cycleclassic.com

Over the top, New Zealand