The Quarterdeck, a charming 5-star gold three bedroom whitewash Cornish cottage, set in the idyllic village of Polperro, is the latest addition to Blue Chip Holidays’ selection of chic coastal retreats. Situated on the opposite side of the pretty River Pol, which flows down to Polperro’s attractive harbour, The Quarterdecck has been finished to an exceptionally high standard.

Sleeping six, The Quarterdeck has been styled by renowned interior designer, Helen Buckley, in the romantic French style.

The main living room is furnished with two luxurious cream leather Chesterfields, two French side tables, a coffee table and sideboard.  When you’re not relaxing with a book, entertainment is provided by a 38” flatscreen TV with Freeview, Blu-ray player, CD player, an iPod docking station and Wi-Fi access. 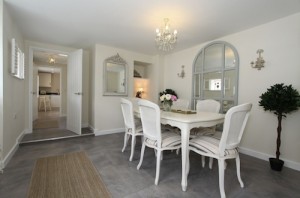 Leading on from the living space is the dining room, which has been finished with attractive stone flooring, a dining table for six and beautiful period mirrors that cast light and warmth around the room.

The kitchen, which has been fitted with chic Silsetone worktops, features the latest in chic Bosch appliances, and has a generous breakfast table for six.

Upstairs are three beautiful bedrooms. Bedroom one is furnished with a French-styled, king-size bed decorated with an intricately carved bedhead.  The antique French chest of drawers complements the bed as do the painted bedside cabinets, mirror, lamps, period pictures and a pretty decorative chandelier. This stunning room leads directly on to a private enclosed, raised patio with seating for six and pretty views over the River Pol.

The third bedroom has been finished in the same vein as bedroom two, and features two ornate single beds.

Upstairs is a large family bathroom, which has been finished with Porcelanosa tiles throughout. In addition to a large double shower cubicle, the bathroom has a traditional bath, wc and wash basin.

Downstairs is a second bathroom, again with a double shower cubicle, wc and wash basin.

Outside is the large patio that sits above the covered private parking area, a rarity in Polperro, a ‘car free’ village.  Enclosed by a glass balcony on the River side and by a white painted wall with climbing roses above, this elegant area is perfect for al fresco dining and sun bathing.

The cottage itself is just a short walk away from Polperro’s many restaurants, boutique shops, tearooms and pubs, including the Crumplehorn Inn at the top of the village and the famous Blue Peter Inn overlooking the harbour, its small trawlers and swans.

Polperro is arguably one of the prettiest villages in Cornwall, characterised by a jumble of fisherman’s cottages and colourful boats bobbing in the harbour.  Guests can wend their way through the traffic-free streets to the small harbour, walking down paths where barrows of fish were once carted by day, while brandy casks and tobacco bales were smuggled into hideaways by night.

Visitors interested in the village’s swashbuckling past can pop along to The Polperro Heritage Museum close by from Easter, where Polperro’s history and smuggling past can be discovered daily (including Sundays) between 11am and 5pm.