Right, I’ve heard that one before, I thought.

On Queensland’s Magnetic Island, Jack, apparently is known as a one-of-a-kind. I was on a two hour Bush and Beach Horse Trek with a small group that included a couple of lasses from Leeds, in West Yorkshire.

Give him a couple of years and he’ll be as famous as Mr. Ed I’ll put money on it. 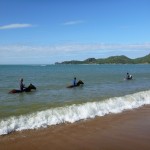