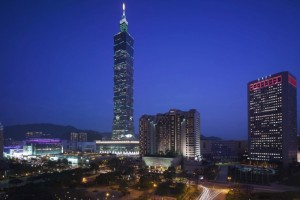 Twenty-five years after opening as the first, true international luxury hotel in the capital, the Grand Hyatt Taipei is on the verge of yet another debut as one of the most sophisticated, urban hotels in East Asia.

The Grand Hyatt Taipei is celebrating its Re-Launch April 23 after a top-to-toe renovation that fleshed out the hotel from its concrete bones. Each of the property’s 853 rooms and suites was stripped to the fundamentals, redesigned and rebuilt.

“With this re-launch, in terms of rooms and restaurants, we’re now a brand new property,” said Kai Speth, the hotel’s general manager. “But with a 25 year history in this same location, we’re also the most seasoned hotel in the city. We’ve got the best of both worlds.” 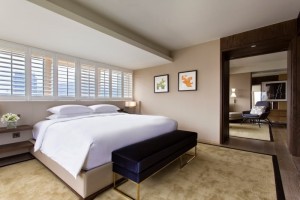 Baths clad in half-square-meters of marble, sophisticated lighting, muted colors, goose down duvets, deep-soaking tubs, ample windows, textured walls, suites that feel like apartments, and rooms that elicit surprise and a wow from guests are hallmarks of the the Grand Hyatt’s brand new day in Taipei.

The hotel’s guest rooms range in size from 33 and 40 square meters at the grand deluxe level to more than 83 square meters in an executive suite. The new presidential suite commands more than 221 square meters and offers up storybook views of the iconic Taipei 101 Tower.

Beyond the rooms, the all new Grand Hyatt Taipei is trumpeting two completely new restaurants, a Chinese restaurant, Yun Jin, and a Western venue, The Steakhouse, each a completely new concept and a ground-up build. Yun Jin’s debut was in February. Work on the Steakhouse begins later this year.

As a complement to the hotel’s substantial changes in hardware, its software has undergone a similarly dramatic transformation as the property asserts itself as a happening hub. In recent months, the hotel has hosted a boxing event, a European Christmas fair and flash mob dance.

The new, less formal vibe at the hotel is evident at check-in. Where hotel staff once greeted guests from one side of a high, grandiose counter, staff and guests gather at any of five low slung desks for a less officious introduction.

“It’s much less of a ‘you and I’ experience,” said Speth, “and much more of a ‘we’re all here together.’ These are very subtle gestures, but a hotel relies on its mostly finely tuned details to create its most memorable effects.”

Beyond check-in, the lobby replaced its souvenir shop with Baguette, a bakery and gift shop designed to stimulate more social interaction as guests resort to a new seating area. Where a business center catered to men and women at work, a new retail shop invites more casual interaction.

What hasn’t changed in the lobby is its grandeur. The elegant space remains the only grand lobby in Taipei. In front of the hotel, a dramatic pruning has pared back a certain cultivated guardedness and opened up the hotel to casual inspection and passive invitation.

“We’re a part of this community, and we want the design, the colors and the layout to say exactly that,” said Speth. “If the boost in local traffic is any indicator, and I think it is, we’ve done just that.”

Music in the air on Hawaii