Crete: Island of the Minoens

The province of Agios Vasileios

The province of Agios Vasilios starts at Armeni north and ends on the south coast of the island where the best known resorts are Plakias, Preveli. It is a region of small hills. The provincial capital is the town of Spili, a big mountain village with cobbled streets and plane trees, known for its Venetian fountain where water flows from 19 heads of lions. Since it is located on the road from north to south, visitors (and tour buses) who stop to admire them seem rather small. In the evening it is still a sleepy village. Spili is not a bad a place to escape the summer heat.

Plakias, a quiet fishing village with its long sandy beach, and two beautiful cafes and tavern was a secret paradise beach of the late 60s and early 70s. Not anymore! In 40 years, Plakias has evolved into a bigger and more comfortable village. It is still a beautiful place, because of its location at the foot of the mountains. You can take some very good walks in the area. Plakias can become extremely windy because of a gap in the mountains.

Damnoni, a few kilometers east of Plakias is a cute and quiet little place. In addition, it boasts a nudist beach. At 6km from Plakias, Moni Preveli is a renowned and well-maintained monastery, located on the Libyan Sea. Like most Cretian monasteries, it played a significant role in the uprising of the island against the Turks. In the Second World War, after the Battle of Crete, it protected many Allied soldiers who were being evacuated to Egypt. In retaliation, the monastery was looted by the Germans. The treasures of the monastery are kept in a small museum. Not far from the monastery is the beautiful palm Preveli. The River Milopotamos cuts the beach in two and its banks are lined with palm trees. This beach is one of the most beautiful of Crete and now attracts so many visitors that it is also one of the busiest. 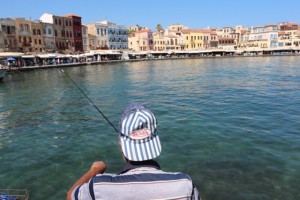 The province of Rethymnon
The provincial capital is Rethymnon, with a population of 35,000, making it the third largest city in Crete. It is from the Venetian occupation an intellectual place while keeping its charm and picturesque beauty. Its most important attraction is the old Venetian quarter – Ottoman occupying the promontory below the Venetian fortress. It is a maze of narrow streets that lead the visitor to the Venitian fortress. Turkish minarets and small houses with wooden balconies are the witnesses of a forgotten era, most of the turkish style buildings were demolished. The old neighborhood has developed into a rather large place to shop and offers a wide range of shops selling almost everything from souvenirs to jewelery to leather, spices and Cretian pottery. Rethymnon also has a very long sandy beach stretching for several kilometers to the east. It follows that it is not surprising that this city has become one of the most touristic areas of Crete, full of hotels and accommodations in all categories.

CHANIA
Covered market, built in the Venetian style.
Carriages, beautifully decorated, wait near the port of El Veniselu place for a stroll.
Museum: The building is worth visiting, located in the Venetian church of St. Francesco. It is a Gothic basilica.
Port: One of the most beautiful harbours in Greece. Cafes and restaurants line the picturesque way along the quay.
Synagogue ETZ Hayyim
Old Town: It covers 490,000m2 filled streets releasing an atmosphere that even the date vénitenne time.

Your best contact in Crete in Crete is definetly Wolf. He speaks many languages including English, French, German and Greek and can organise your visit including your lodgings.