There are 37 World Heritage Sites located in India. These include 29 cultural sites, seven natural sites and one mixed site. India has the 6th largest number of sites in the world.

There are more well known ones in India (such as The Taj Mahal and The Red Fort of Agra) but we have decided to showcase 10 here…some of which you may or may not have heard of … all of which are well worth a visit. 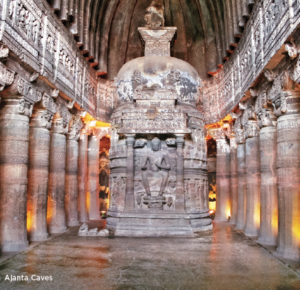 The Ajanta Caves are Buddhist caves built in two phases. The first was from the reign of Emperor Ashoka (3rd century BC), and the second, further additions were made during the 5th and 6th centuries AD of the Gupta period. The caves depict richly decorated fresco paintings, reminiscent of the Sigiriya paintings and sculptures in Sri Lanka. There are 31 rock-cut cave monuments which are unique representations of the religious art of Buddhism. 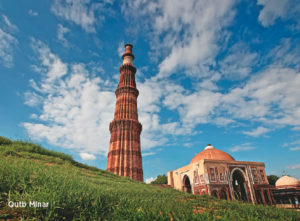 The complex of structures comprises the Alai Darwaza Gate (1311), the Alai Minar (an incomplete mound of an intended Minar or tower), the Qubbat-ul-Islam Mosque (the earliest existing mosque in India), the tomb of Iltumish and an Iron Pillar.

It is a testimony to the Islamic depredations during the period as seen from the materials used for building the complex which are those that were removed after destroying Hindu and Jain temples; a shining iron pillar of 7.02 metres (23.0 ft) height (without any trace of rusting) erected at the centre of the complex, with inscriptions in Sanskrit, of the Chandra Gupta II period is a moot witness.

History records its construction, initially by Qutubuddin Aibak in 1192, its completion by Iltumish(1211–36) and again by Alauddin Khalji (1296–1316). It underwent several renovations by subsequent rulers, following damage to the structures due to lightning. It was inscribed under the UNESCO World Heritage List under Category IV for its unique representation of the Islamic architectural and artistic excellence. 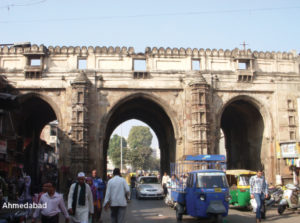 The walled city of Ahmedabad, founded by Sultan Ahmad Shah I in the 15th century, on the eastern bank of the Sabarmati River, presents a rich architectural heritage from the sultanate period, notably the Bhadra citadel, the walls and gates of the Fort city and numerous mosques and tombs as well as important Hindu and Jain temples of later periods. The urban fabric is made up of densely-packed traditional houses (pols) in gated traditional streets (puras) with characteristic features such as bird feeders, public wells and religious institutions. The city continued to flourish as the capital of the State of Gujarat for six centuries. 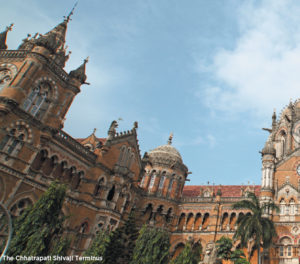 The Chhatrapati Shivaji Terminus is an historic railway station in Mumbai, which serves as the headquarters of the Central Railways. It is one of the busiest railway stations in India. The station was designed by Frederick William Stevens (1848 – 1900), a consulting architect. It took ten years to complete and was named ‘Victoria Terminus’ in honour of the Queen and Empress Victoria, and was opened on the day of her Golden Jubilee in 1887. This famous architectural landmark in Gothic style was built as the headquarters of the Great Indian Peninsular Railway. In 1996, in response to demands by the Shiv Sena (a political party), and in keeping with the policy of renaming locations with Indian names, the station was renamed by the state government after Chhatrapati Shivaji, the famed 17th century Maratha king. 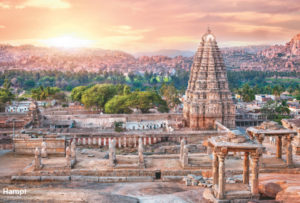 5 – Group of monuments at Hampi, Karnataka:

The Group of Monuments at Hampi comprise a sombre but ostentatious Hampi town, on the banks of the river Tungabhadra in Karnataka. Hampi subsumes the ruins of Vijayanagara, which was the former capital of the powerful Vijayanagara Empire. Dravidian temples and palaces abound in Hampi. These won the admiration of travellers between the 14th and 16th centuries. Hampi, as an important Hindu and Jain religious centre, has the Virupaksha Temple (different from Pattadakal’s Virupaksha Temple) and several other monuments. 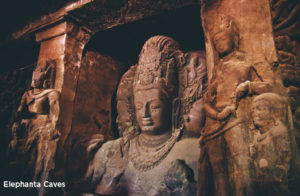 The Elephanta Caves are a network of sculpted caves located on Elephanta Island, or Gharapuri (literally “the city of caves”) in Mumbai Harbour, 10 kilometres to the east of the city of Mumbai. The island, located on an arm of the Arabian Sea, consists of two groups of caves — the first is a large group of five Hindu caves, the second, a smaller group of two Buddhist caves. The Hindu caves contain rock cut stone sculptures, representing the Shaiva Hindu sect, dedicated to the god Shiva. The rock cut architecture of the caves is dated to between the 5th and 8th centuries, although the identity of the original builders is still a subject of debate. The caves are hewn from solid basalt rock. Renovated in the 1970s, the caves were designated a World Heritage site in 1987 to preserve the artwork. 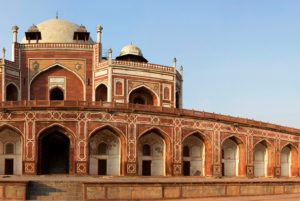 Humayun’s Tomb, Delhi, was the first tomb built with several innovations. Set at the centre of luxurious gardens with water channels, it was the precursor monument to the Taj Mahal (built a century later). It was built in 1569–1570 by the 2nd Mughal Emperor Humayun’s widow, Biga Begum (Hajji Begum). Its architecture is credited to Mirza Ghiyath and its Mughal architectural style has been acclaimed as the ‘necropolis of the Mughal dynasty’ for its double domed elevation. Apart from the tomb of Humayun, the funerary also has 150 tombs of various members of the royal family.

The tomb is built with a char-bagh (four-fold) layout with two gates, one on the south and the other on the west. It has a number of water channels, a pavilion and a bath. The tomb, set on an irregular octagonal plinth, has a raised dome of 42.5 metres (139 ft) in height, covered by marble slabs and decorated with chhatris. Humayun’s tomb was inscribed as a UNESCO World Heritage Monument in 1993 for its cultural importance.

The Mahabodhi Temple Complex at Bodh Gaya (Buddha Gaya), spread over an area of 4.86 hectares (12.0 acres), is UNESCO World Heritage Listed as a unique property of cultural and archaeological importance.

The first temple was built by Emperor Ashoka in the 3rd century BC (260 BC) around the Bodhi Tree Ficus religiosa (to the west of the temple). However, the temples seen now are dated between the 5th and 6th centuries AD. The structures have been built in bricks.

Revered and sanctified as the place where Siddhartha Gautama Buddha was enlightened in 531 BC, at age 35, and then propagated his divine knowledge of Buddhism to the world, it has been the ultimate temple for reverential worship, over the last several centuries, by Buddhists from all over the world.

The main temple is 50 metres (160 ft) in height, built in Indian architectural style, and it is the oldest temple in the Indian sub-continent built during the Golden Age of Indian culture credited to the Gupta period. Sculpted balustrades of the Ashokan times (3rd century BC) are preserved in the Archaeological Museum located within the temple complex. 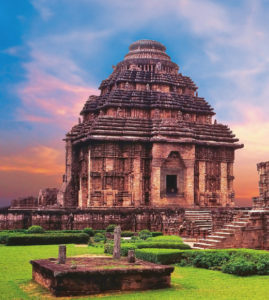 The Konark Sun Temple is a 13th century Sun Temple (also known as the Black Pagoda), at Konarak, in Odisha. Located on the east coast of the Bay of Bengal in the Mahanadi Delta, it is built in the form of the chariot of Surya (Arka), the sun god with 24 wheels, and is heavily decorated with symbolic stone carvings and led by a team of six horses. It was constructed from oxidising weathered ferruginous-coloured sandstone by King Narasimhadeva I of the Eastern Ganga Dynasty. The temple is one of the most renowned temples in India and became a World Heritage site in 1984.

The Keoladeo National Park in Bharatpur is located within the Indus-Ganges Monsoon Forest Biogeographical Province. It extends over an area of 2,783 hectares (6,880 acres) and was declared a national park in 1982.

In 1900 it was a duck-hunting reserve of the Maharajasof Bharatpur, then became a bird sanctuary in 1956, with the Maharajas exercising shooting rights until 1972. It was recorded as a Ramsar Wetland site in 1981 and joined the UNESCO World Heritage List in 1985.

The area of the wetland of the park shrinks to 1,000 hectares (2,500 acres) during most of the year. It has a human-built environment created partly by embankments dividing the area into 10 units, and has a sluice controlled arrangement to maintain the water level. It is famous for 364 species of wintering birds that flock in large numbers, arriving from distant countries of Afghanistan, Turkmenistan, China and Siberia. It is surrounded by 17 villages and Bharatpur city.