Niue – MORE THAN A ROCK

MORE THAN A ROCK

Somehow, somewhere, Niue has become lost in the swell of the Pacific Ocean. So few maps show it thrusting through the ocean, just between Samoa and Tonga, although its land area is bigger than that of the Cook Islands. Perhaps it is because it doesn’t fit the stereotypical images of a tropical island, with long white sandy beaches and benign lagoons, but then Niue wouldn’t be Niue and that would be a great shame.

It’s possible to spend a week lying in the sun on the extensive decks of the Matavai Resort that overlook a drop straight into the ocean and watch the whales as they migrate past. You could wander out for a meal at a choice of restaurants including Indian, Japanese and Italian; perhaps take an easy stroll along one of the many seatracks that lead to cliffs with views out to the sunset or to rock pools for a lazy swim; spend a lazy Sunday at the Washaway Bar listening to music and gossiping or take a walk around the local market.

But if you really want to get the best of this gritty little nation, called The Rock by its citizens, you need to put your stoutest walking shoes on and just get out there. It starts with a labyrinth of caves that weave their way under the surface. Stalagmites and stalactites nearly meet in pointed grins, dark pools reflect nothing and in some you will see the skeletons of ancestors…real skeletons

of real people, not some sideshow gimmick. Here is the first clue that this is not your average Pacific Island.

Niue is the top of a subterranean mountain so the ocean gets deep almost immediately. This means migrating whales swim very close to shore, making the island one of the premier places for observing these enormous mammals. There were so many of the creatures passing by last October that they say the sea looked like ‘whale soup’ and people couldn’t sleep for the sound of the whale song. They share the water with Spinner dolphins, which are about eight times smaller but just as prolific. They chase the bow wave of boats and leap and spin in the air, for the sheer enjoyment of it, as well as showing off.

It is because Niue is the top of a mountain that there is very little that can be called a beach, just a crescent below the village of Avatele and a few small drifts in the elbows of the sea cliffs, reached by seatracks. These tracks pass through tropical forest, on to cliffs and into chasms and there isn’t a one that isn’t worth the walk, for views out to forever or to take you into a deep beautiful chasm or down onto a reef full of enormous rock pools perfect for swimming and snorkelling.

Once you’ve added deep sea fishing, hunting for the local coconut crab (a delicacy not to be missed), a couple of rounds of golf and a hike through the thick forest of the National Park, a week might just not seem long enough.

Niue, not your typical South Pacific island. In fact, you are one up on history just by being there as it was the only island that Captain Cook didn’t land on. He was there (where in the Pacific wasn’t he?) but, for all the courage of the man, the Niueans succeeded in scaring him off. He named the island, Savage Island but he couldn’t have been more wrong. 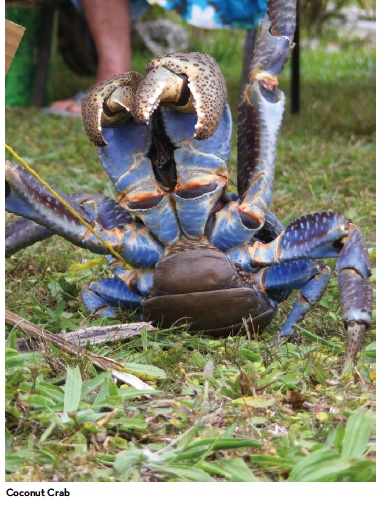 Hire car or motorcycle is recommended. A Niue licence is available from the Police Station at NZ$ 25.

Niue is self-governed in association with New Zealand. Niueans are New Zealand citizens and (conveniently) the currency is NZ$.