I arrived in Charters Towers, Queensland about midday and the heat was stifling.

My first stop was to check into a Big4 Campground called the Aussie Outback Oasis and began preparing a leisurely lunch. My afternoon visit to nearby Leahton Park had been put back until 5pm as the owner Michael had arranged to move 23 head of brahma cattle he was selling in town the next day.

I arrived on time as the only invited guest, so instead of hitching up his Texas made, covered wagon pulled by two huge horse we jumped into a specialized Polaris ATV Ranger for a bumpy ride into Michael and his wife Linda’s 1100 acre spread. Award winning Leahton Park is home to the largest herd (70 or more) of purebred Texas Longhorn cattle in Australia. When I asked where he imported them from he said: “Believe it not, our first few head we bought from a guy in Tauranga in New Zealand.”

Five years ago Michael and Linda began hosting tourists on their three-hour long Longhorn Safari Tours, the only one of its kind in Australia.  And how those Texan’s must be green with envy. Michael and Linda have a five-year old steer named ‘JR’ that has made it into the Guinness Book of World Records with the longest horn span measuring tip to tip, all of nine feet one inch. 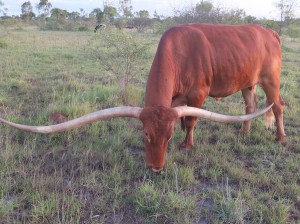 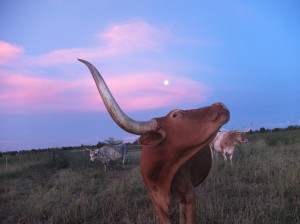