The Streets of Marrakech

At the foot of the Moyen Atlas, a mountain in southern Morocco which is a hyphen between the sea and the desert, lies Marrakech, the pink city of a hundred thoussand palm trees.

Its heart is the hallucinating square Jamma el F’Na. The soul of the south is here with all its magic and frenzy. The square resembles a huge theater, void of engineers, with natural lights and scenery.

It transports me five centuries back in time. The rhythm of the timbrels, the dust and heat, the curious crowd, the dancers, the jugglers, the bird-fanciers and other mountebanks, the blind men who tell unbelievable stories, the writers who flaunt their profession and wander around the square with their pens in hand, and the dentists with their rudimentary equipment. It is another world. 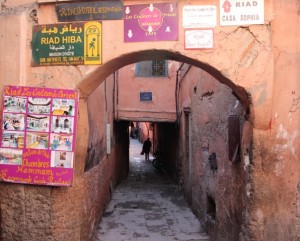 There are the Gnuouas: black dancers whose ancestors came from Guinea. Dressed in puffed pants, long shirts and a black forage cap, they are a great attraction. The music becomes deafening and their dance frantic. The event becomes a sitting of exorcim, often lasting until the performers are exhausted.

And there amid the crowd, is what must be the king of the punk. He has the demeanor of a warrior. Two live scorpions crawl over his face, a poisonous spider is affixed to his skin. He clutches a live snake between his teeth and holds another beast, which I can’t identify, in his hands. Another snake charmer, his mouth foaming, his hair scattered, sits in front of black, shiny cobras. Theie flat heads balance menacingly in the air. This site is not uncommon on the square Jamaa el F’Na. 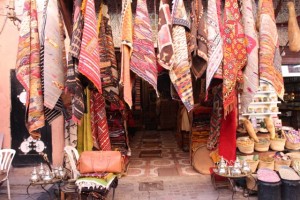 It smells good close to the open-air kitchens. Fresh wood barbecue roasting the kebabs, which cost few dirhams each, fish cooked in olive oil, french fries, tanginess, and more. For a general view of Jamaa el F’Na, and its fascinating inhabitants, take a table on the terrace of one of the many restaurants around the square. The show is fascinating. You can stay for hours with binoculars in hand.

One end of the square serves as the anterroom of the souks. Let yourself flow with the flux of the crowd through the labyrinth of shadows and lights. My guide Mohamed, who speaks perfect English, French and Spanish, shows me the way in this cavern of Ali Baba. 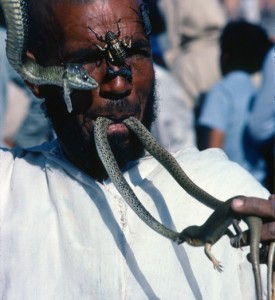 It assaults all five of my senses. My eyes are attracted by the variety of colours and multitude of goods; my ears hear bizarre and unknown noises that sometimes resemble cacophony. And finally, my nose is solicited by both subtle and agreeable smells, the strong stench of leather, and sometimes the smell of feet.

I must protect myself from the donkeys and horse-drawn carriages that pass by as I am tansported through the narrow streets by the crowd. Mohamed shows me two streets. The first is lined with bazaars and then expands into a little square in which candied lemons, mint and other goodies are displayed. The second street reveals a little potters’ souk. Here are items from all over Morocco – vases from Safi; glazed objects from Demnate; amphoras of uncooked clay from neighboring counties; tangines from Slaoui.

Further along you find the dry fruit merchants (almonds, nuts, dates), who attempt to chase the shameless, hungry birds from their displays. The street of the souk Sammarine is a great alley for textiles, silk, muslim, and brocardes. It is the district where the oldest bazaars can be found. We pass the chemists and a few steps along is the wool market that is held every morning. 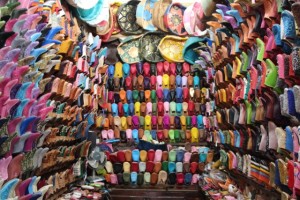 This leads us to the ancient grain market, Rahaba L’Kdima, where until the dawn of the 17th century, slaves were presented for sale. Rugs are displayed in the sun in this charming square. But be careful – These new rugs are just waiting to become ancient and valuable with a little discolouration from the sun and a sulphur treatment!

To get to the rug souk, enter by a tiny door that opens onto the rug market, or souk Zrabia. I squint because of the luminous colours. The dominant colour of each rug indicates its origin: red – Tazenakht; black – Quarzazate; pale yellow and violet – Zagora. The blazing ones are from Chichaoua. They always have a design that resembles the teeth of a saw.

The black, orange, green and white colours in a carpet indicate that it comes from Ait Glaoua, the Quaouzguit from the Haut Atlas with black points (sometimes there are up to 90,000 of them to the square yard) which represent cartoons that trace the nomadic life. Other kinds have thick threads; others have short hair. But they are all handwoven by young girls.

We walk past the makers of choukaras, purses for men which are typical in Morocco. They are usually worn on the shoulder, as a sling. At the end of the street a little door opens up to a small square covered with savage vine that is full of embroidered saddles and harnesses for ceremonies. 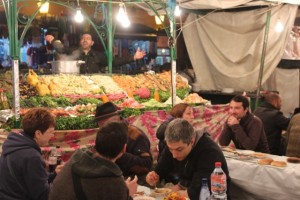 In the souk Smata you will find slippers, known as babouches. On your way to the souk of the dyers, you can admire men who chisel cedar wood with their feet to create pipes, skewer handles and even little boxes out of mohagony. During all this, you are walking under skeins of wool and silk that are drying on reed canes.

You will encounter sellers of water, who will pose for your camera for a mere 50 cents.

Back on the main street is the copper souk where the choice is overwhelming – bronze, Germain silver, brass and even Russian samovars, Spanish pots, and teapots from all over the world, including India. Coppersmiths and recasters remodel the copper objects, collected throughout the southern countryside, and sell them here or send them to merchants in Great Britain.

The sun is about to set. The muessin, a Muslim crier who calls the hour of daily prayer, calls and the faithful listen. The streets slowly empty. The noise level drops several decibels. The Marrachkis, however, remain business-minded. One goes to pray while the other watches the store. It’s is the perfect time for bargaining.

My next trip in Morocco will be the fabulous Spa and Palace.

Were to stay : Riad BOUSSKRI in the Medina, close to Jamma el F’Na.