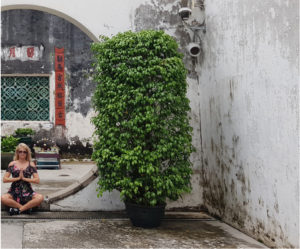 The Real Macao … a kaleidoscopic adventure tantalising all your senses – all at once. All you need to do is indulge.

One minute you’re exploring the stunning extravagance of one of the world’s leading hotels – the dramatic yet intriguing architecturally designed Morpheus Hotel; the next, in a complete juxtaposition, you’re soaking up the sights and rich history of UNESCO World Heritage sites. Moments later, you find yourself in Coloane Village with eyes bigger than your stomach as you indulge in a third helping of Portuguese egg tarts at Lord Stows Bakery.

Marvelling over the day-to-day life in the Red Market packed with local delicacies and fresh fish filleted as you watch…checking out the eccentric nightlife at Club Cubic or gob-smacked at the House of Dancing Water show… indulging in jasmine tea and chicken feet at Long Wa Traditional Chinese Tea House … Macao has it all!

Nestled in amongst the hustle and bustle of it all, you find yourself in a tranquil garden serenely practicing tai chi with a group of elderly local ladies – a truly treasured moment. It’s moments like these that you stumble across that cause a smile to spread across your face and fill your heart each time you relive them.

Macao is littered with variegated moments. Around every corner is a new hidden gem waiting to be discovered. It’s a destination that tantalises all your senses – mind, body and spirit – gastronomic nirvana, historical and cultural melting pot. It’s where east meets west, Cantonese fuses Macanese culture and you find the new Macao and old Macao thrive together. Even though crowded with more than half a million people, there are so many quiet havens where you have the place to yourself.

Known earlier as Ou Man (the door of the bay), this trading port has seen many names … Hou Kong, Hoi Keang, Amagao and now Macao.

Located about 64kms west of Hong Kong, Macao is a Special Administrative Region of China that includes the islands of Coloane and Taipa. It’s easily accessible by causeways or the ferry from Hong Kong. The new Hong Kong– Zhuhai–Macao Bridge, the longest sea bridge in the world, permits registered vehicles ensuring the streets of Macao are not congested.

Why did I love Macao? Aside from the abundance of delicious food, it was the people…so welcoming, so passionate about their crafts, such hard workers and they love a photo op! The people make Macao unique.

Portuguese colonists raised families with Chinese women, giving birth to the Macanese – a distinctive blend of Chinese and Portuguese. Macanese cuisine encapsulates southern Chinese, African and Portuguese techniques and ingredients that are mouth-watering.

While Cantonese and Portuguese are the official languages, English is widely spoken and they also have their own Patua dialect. Street signs are multi-lingual, like many of the people.

Much of the architecture of Macao showcases the blend of heritages. The Historic Centre of Macao was inducted into the UNESCO World Heritage List in 2005, with over 20 locations that exhibit two contrasting cultures.

People-watch at Senado Square, the historical heart surrounded by numerous pastel monuments; a stone’s throw from the famous Ruins of St Pauls whose grand granite façade lures you up the giant staircase. For panoramic views of the city, take the escalator or walk to Monte Fort, or head to São Lourenço to take in the beauty of an 1869 family mansion, Mandarins House.

Macao is riddled with ancient stories and folktales, all fascinating, but none like I learned at A-Ma temple. This architecturally treasured temple dates back over 500 years and unites several local religions, including Buddhism and Taoism. It was built to memorialise A-Ma, the ‘sacred goddess of the sea’ and ‘protector of fishermen’. One legend claims she was a real person who could predict the future. Today, as fishermen use the canal, they turn towards the temple to pray for protection.

The views here are spectacular, the architecture phenomenal and you’re able to immerse yourself in local religious and spiritual activity. Most worshippers burn incense and pray. The temple is guarded by two stone lions – I was told that if you touch the lion and put your hand in it’s mouth you will get pregnant. I don’t know if they were pulling my leg, but I did it. Of course I did! You have to live in the moment. 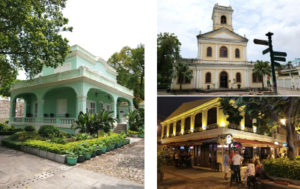 If you prefer a more tranquil setting then Jardim de Lou Lim Ioc is for you. This elegant garden is like exploring a hidden secret. Enclosed by high walls, nestled at the northern foot of Guia hill, you feel like you are miles away. People congregate to play mah-jong, enjoy music, dance, rejuvenate, appreciate the art exhibitions, browse the bonsai trees and simply stroll, taking in all the charm the gardens have to offer while letting go of any stresses. The 1.78 hectare garden is modelled on the most famous of all Chinese classical gardens, Suzhou, with exquisitely manicured landscapes, winding paths, beautiful flowers, grottos and Chinese pavilions. The locals here are more than happy to share their stories and the wellness practices of Tai Chi. This was my favourite moment from Macao!

I watched in admiration a group of older women moving so gracefully, with slow yet precise movement of their bodies, in sync and moving as one, but with their own flair and oblivious to their surroundings. They were 100% in the moment, yet they welcomed me to join in. Even though we didn’t share the same language, we were able to share this beautiful moment through movement in such an idyllic setting.

When you look out from the gardens to the skyscraper apartment blocks, it’s bewildering that such a tranquil setting can exist in amongst the bustle.

Equally as beautiful is Taipa Village. Stepping into Avenida da Praia is akin to stepping into a blissful visual and sound healing. Looking out over the giant lily pad-covered pond, originally the first airstrip in Macao for seaplanes, the casinos on Cotai Strip are a sight to behold. Yet this peaceful environment, uncrowded and with only bird song to be heard, captures the authentic beauty of Macao.

The Taipa Houses, in all their pastel Portuguese architectural glory, date to the 1920’s and were inhabited by a Portuguese governor, high-level civil servants and their families. They are now home to the Macanese Living Museum featuring artefacts celebratinglife during the colonial period, offering an insight into what life was like in 20th century Macao. Be sure to peruse Our Lady of Carmo Church, the only Catholic church in Taipa.

Taipa also showcases present times with some of the best Portuguese and Macanese restaurants – make a turn down one of the winding lanes and take your pick. If a sundowner is what you are after, wander down to the Old Taipa Tavern – just ask for Dan; he’s a Kiwi.

In Macao, you are spoilt for choice and there’s a feeling of being in two destinations at once. There’s so much to explore. No matter what your interest, it always delivers. Don’t get me started on the cuisine here – in fact, come on a gastronomic journey with me in my next article!

I’ll end by stating that you never know where you might find yourself in Macao but you will always, always be satisfied on every level. So step out of your normal routine, tantalise all your senses and indulge in The Real Macao.