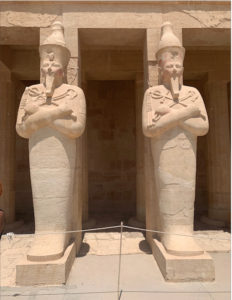 Walking With Egyptians (Part 2) – Luxor & The Valley Of The Kings

He was able to identify that the three types of writing on the Rosetta Stone (Ancient Egyptian hieroglyphs, Demotic script and Ancient Greek) all seemed to be saying the same thing. Once he identified this and could extrapolate out the Greek and Demotic then he was able to read what the Ancient Egyptians were writing about. During the Napoleonic Wars he was able to avoid conscription because of his loyalty to Napoleon, so could work out what was needed to enable us to read hieroglyphics today.

Some scholars argue that the British man, Thomas Young, deciphered the Rosetta Stone and that Champollion only ‘refined’ it. Rubbish I say! If it hadn’t have been for the Frenchman ‘finding the key’ that linked all three scriptures we may be struggling to read the texts of ancient Egypt today.

Unfortunately Champollion died at the age of just 41 on return from his second visit to Egypt, to read and translate many hieroglyphs, and never got to see his works published. You can, to this day, see where he engraved his name on a part of the Temple at Luxor. Although I don’t recommend you trying to leave your own ‘inscription’ today!

Thanks to the likes of Champollion and Young my journey through Egypt in 2019 made for a far more informative journey than it would have been not so long ago and one that millions of tourists are able to enjoy to this day.

Getting off the train in Luxor (what a nightmare), we dropped our bags on board the Royal Lotus; a river cruiser that was to be my home for the next three days.

Which ever tour company you choose to travel with in Egypt please see if you can fly between Cairo, Aswan and/or Luxor if at all possible. Cost may be a factor but the reason I say this is because the trains running up and down the Nile River are the pits. Not the fault of any tour company, as that is what is presented to any traveller making the journey north or south by rail.

So it was with absolute glee and euphoria that I boarded the Royal Lotus and checked in to my cabin…to clean sheets, a choice of several bars, fine food smells wafting from the restaurant and…a chance to shower and cleanse myself. It pays to research which cruise ship your tour company utilises along the Nile. On The Go tours only use the best. Then it was off to The Valley Of the Kings…a true ‘Jewel’ of The Nile.

For almost 500 years (from the 16th to the 11th centuries BC) this site on the western banks of the river Nile at Luxor (formally Thebes) was excavated and utilised as the last bastion and resting place for (the currently discovered) 63 royal figures and privileged nobles. Undoubtedly the most famous of the tombs is KV62…the final resting place of Tutankhamun. But there are a plethora other tombs to explore.

Good tour companies will collect from you (at the beginning of your hosted tour) Entrance Fees and money for a Tipping Kitty. This means your guide can get the group’s passes and save time to ensure you get the maximum time to explore. These are set fees charged by the Tourism Ministry. 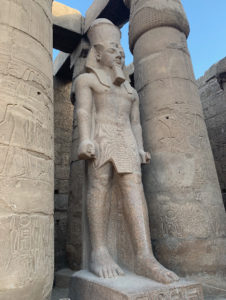 Passes to The Valley Of The Kings include entrance to three separate tombs – these change daily so as to not ‘overrun’ any one individual tomb with a massive number of tourists. So, if you have a specific tomb you want to visit check on line what day that tomb is open. Don’t worry – Tutankhamun’s tomb is open daily but is limited to a maximum number of guests per days. His tomb costs extra meaning you can visit four tombs in one visit.

On this day I chose KV15 (Sety II), KV47 (Siptah) and KV 11 (Ramses III). The first one is of average length – a straight burial chamber with varying degrees of engravings still intact but the other two of Siptah and Ramses III, whilst also being quite straight and direct, are quite a bit longer – and some of the adornments on the walls and roof of the chambers are stunning to this day. In reality Tutankhamun’s tomb is quite small (in area) but the frescos are stunning (see the image in the article), but so are the walls of Ramses III.

The ‘Valley’ gets really hot so the earlier your guide gets you there the better. We set off to the far end of the Valley so we could work our way forwards (and downhill) as we progressed back through the Valley. (Sety II’s tomb is at the very end of the uphill climb through the valley).

Please be aware that tour guides are not allowed to lecture inside the tombs, so they will explain to you what are the best features to look for before you go inside and then wait for you outside. This means that time inside the tombs is minimised and prevents crowds damaging the walls.

Near to the Valley Of The Kings is the temple dedicated to Queen Hatshepsut (1507 – 1458 BC). Whilst imposing to view from a distance I found it the most boring of all the temples visited. I looked at it from afar, walked up the three tiers to its top, then adjourned to the bar/café at the entrance for a cool lager, whilst I waited for my fellow travellers.

Back on board Royal Lotus we freshened up, had a fantastic lunch, then headed to the Temple of Luxor.

My fellow travellers in our exclusive group could not have been a more inclusive bunch. Sometimes, as a journalist, when mingling and travelling with ‘paying parties’ you can feel a little disassociated from the group. Not this time – my four fellow Kiwis, four Aussies from the Central Coast and two lovely Americans from the North-East were the best group I have travelled with in many a year.

At the entrance to Luxor’s temple I was taken back 30 years to when I first viewed this famous structure. I was travelling with a good friend of mine, Graeme, and we had been out late the night before and, shall we say, we were ‘under the weather’. 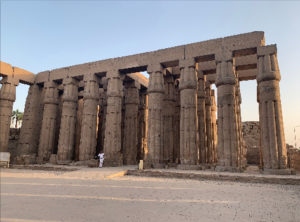 We took a few quick photos with our cameras from the outside (I actually carried two cameras back then – one with colour film in it and the other with black & white film in it) – then headed back to our hotel to…recouperate!

Not this time. I spent a good hour and a half walking these famed ‘avenues’ admiring the skill, application and wonder that fellow humans almost 3,500 years ago could construct without so much as a modern spirit level to aid them.

As you enter the temple the imposing statues of Ramses II greet you either side of two great towers, universally considered to have been watchtowers, along with one single large obelisk. The self-declared Egyptian ruler Muhammad Ali Pasha gifted the obelisk that used to stand on the other side of the entranceway to the French in the late 1820’s…it now stands proudly in the Place de la Concorde in Paris.

As you walk through the myriad pillars, carvings, avenue of sphinxes and obelisks you won’t find the temple dedicated to one particular pharaoh or goddess/god.

The Temple of Luxor was dedicated and remembered for several Pharaohs including the most famous of them all Ramses II, but also Amenhotep III, Tutankhamun himself and, apparently, by the forces of Napolean.

It was getting close to sunset and the team was getting tired and in need of a libation and dinner. Sal, our superb On The Go Tours guide, poured us in to our air-conditioned shuttle and we headed back to the Royal Lotus. What a day!

The author would like to thank Etihad Airlines for their tremendous service in getting him to Egypt, via Abu Dhabi. www.etihad.com 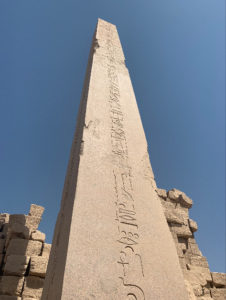 When travelling through Egypt it helps to be aware of the following:

1 – Markets/Hawkers: You WILL be approached and ‘hassled’. Don’t flinch – these people are only trying to make a living and I have found that the majority of them respond to positive banter and bartering. Tip: put a minimum amount of cash in one of your pockets that you’re willing to spend. When your shopkeeper insists he wants more money than you are offering show him you only have ‘x’ amount of $$. They’ll come down to meet your offer pretty quickly.

2 – Visas: Visas are required for all visitors to Egypt and it is easy to apply for on-line. Currently the cost is US$25 but that is set to rise to US$60 ‘at any time’. www.visa2egypt.gov.eg

You can get a visa on arrival (payable in cash only) but this would hold up your passage through customs.

3 – Currency: The exchange rate of the Egyptian Pound is controlled by the government so it doesn’t matter which exchange place you go to. I suggest you take US$ cash in with you and exchange next to the baggage carousel in arrivals.

4 – Camera Fees: There is no longer a camera fee for using your cellphone BUT there is a fee (payable separately) for larger digital cameras and various sites around the country. Your guide will know where and which ones will charge.

5 – Etiquette: Remember this is a Muslim country, albeit one that has a fine reputation (generally) for looking after foreign travellers. Be respectful – dress accordingly – don’t kiss in public – and ask permission if you wish to take someone’s photograph.

5 Ways to Experience the Local Culture When You Travel