Being in the Serengeti during the Great Migration is a once in a lifetime experience, discovers Helen Hayes.

We see the ribbons of black from miles away, kicking up the dust as their inner voices tell them they must go, following the sea of wildebeest tails in front of them. Our driver and guide, Henry Akeyo, tells us that they will probably cross the Mara River at crossing point number six, and we bump across the plains to get ahead of thousands of these sleek-sided animals. 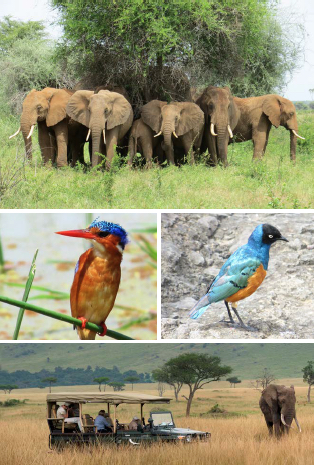 “The wild dogs cry out in the night

As they grow restless, longing for some solitary company

I know that I must do what’s right

As sure as Kilimanjaro rises like Olympus above the Serengeti”

P ulling up at a spot on the bank, we joining other vehicles. The wildebeest have picked a bad spot to cross, with a pile of huge boulders in the middle of the river and a rather large crocodile waiting in the wings.

“They are going!” Henry yells, and all hell breaks loose. The seething tide of animals surges into the water, battling each other for somewhere to put their feet. They climb over the rocks mid-stream, plough through the water on the other side and then sprint up the hill on the opposite bank to join the throng of their comrades who have crossed to this side earlier. They grunt and push, stirring up a dust storm that coats everything and everyone. The croc gets so close his mouth opens ready to take a bite, but somehow, he keeps missing.

Eventually, one of the wildebeest is not feeling it anymore and decides not to cross and all of the others behind him stop. Just like that, the crossing is over…at least for today.

I am in the northern part of the Serengeti in Tanzania, kissing the border with Kenya. We flew in a small plane from Arusha to Kogatende Airstrip. After we were met by Henry, he makes us a spot of tea before we drive to the camp. We see our first animal 50 metres from the airport – a large Nile crocodile snoozing on a rock, with a herd of elephants, including three babies, just up the track. 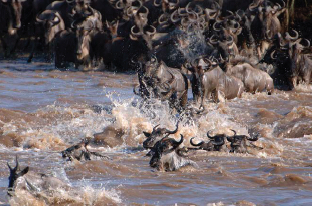 Over the next few days, we see an A to Z of animals in a head-spinning experience. Literally! Like meerkats, we are looking here, there and everywhere as wildlife of all shapes and sizes appears. We come upon a Serval snacking on a cobra, a leopard sunning herself on a shaded boulder, birds of all colours, a red-headed Agama (lizard) with a bright blue body doing push-ups, herds of elephants, so many lions, two cheetahs under a tree, mongoose, kneeling warthogs, ostriches, giraffes, impala, Thomson’s gazelle, topi and waterbuck.

Back at camp, we have drinks to watch the most beautiful of sunsets, then indulge in a wonderful three-course dinner in the dining tent, chatting with other guests about the sightings of the day.

The next day, after visiting many of the crossing points along the Mara River, we see the aftermath of a recent crossing at number nine. There are 59 vultures, 10 hippos and seven huge crocodiles, two of which are working in harmony to eat a wildebeest that didn’t make it across in the frenzy.

These crossings are the most dangerous part of the Great Migration. Every year around 1.5 million wildebeest, along with 200,000 zebra, migrate north from the Ngorongoro Conservation Area, chasing the rain and the rich grazing grounds the precious rainfall brings. They go clockwise in a wonderful circle of nature, ending up in the Masai Mara and, come November, they head back to the Seronera, to the place where it all began. All up, the round trip is around 1,000 kms. 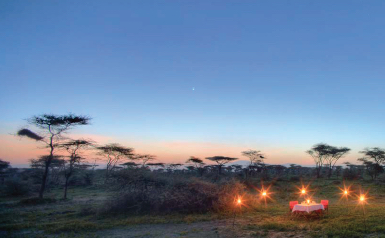 When I witness the event myself at crossing number six, my mind is officially blown. I ask Henry why they cross when it is so dangerous? He says quietly “to get to the other side, where the grass is greener from a recent rain. Soon the land here will dry up. The land here will regenerate, the crocs will hibernate with full stomachs and the wildebeest will start moving south again, to the Seronera.”

And so I too migrate south to Seronera, where the landscape is a little different to the northern area, with the plains going on forever under an alluring light, as well as rocky hilltops, or kopjes, that often hide lions and leopard.

On the first game drive from camp, our guide, Mohammed, pulls up on the road and points out a cheetah snacking on a kill in the grass, a committee of vultures patiently waiting their turn by the roadside. Not two minutes up the road we find another cheetah, also digging into a fresh meal.

Mohammed goes over and above the call of duty the next day, when shortly after breakfast, we hit the road only to be forced to stop because of a traffic ‘hazard’…a pride of 15 lions asleep and spreadeagled on the road. 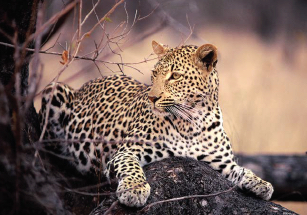 We stay put, watching them, until one of the lionesses gets up, stretches and pads off through the grass, setting off a chain reaction…the others follow. She stops atop a small rock, joined by three others, while the rest go back to sleep in the grass.

Mohammed says she is hungry and looking to hunt. One lioness goes into stalking mode, dropping low and heading to the left of an unsuspecting warthog (think Pumbaa from The Lion King). Another lioness slinks to the right, and two come up behind, with the rest of the pack waiting in the wings.

The lioness on the left attacks, and the resultant shriek tells Mohammed she has been successful. We go straight to the scene and find a tangled knot of lions, all 15 of them desperate for a slice of the Pumbaa pie. Soon, several pull out with their share, leaving the rest to the growling melee.

The Serengeti has well and truly captured my heart, and I will undoubtedly feel the invisible pull back to its magical plains again. Like the wildebeest…I will be unable to resist. 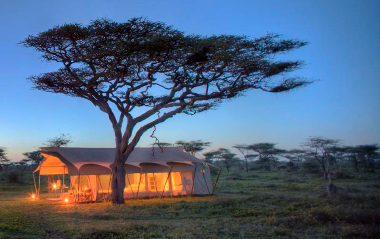 The Masai Mara and Serengeti are two of the most famous national parks in Africa, best known for offering up ringside seats to the Great Migration. This makes them both extremely popular destinations for luxury safaris.

The Great Migration is undoubtedly one of nature’s most unforgettable spectacles: 1.5 million wildebeest, accompanied by 200,000 or so zebra, are engaged in a never-ending journey, following the rains in a circular route, through a wilderness that takes in the Serengeti National Park and Kenya’s Masai Mara Game Reserve. The annual migration actually begins deep in the south of Tanzania’s Serengeti National Park, where an estimated half a million wildebeest are born between January and March each year. But when the rains trickle to a halt in May the land dries out, forcing the grazing animals to move on and head for their dry season habitat – the Masai Mara region in neighbouring Kenya, navigating their way past hungry Serengeti lions, leopards, cheetahs, hyenas and crocodiles. 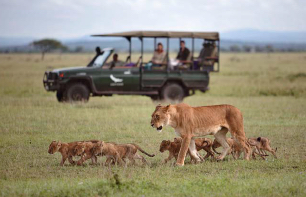 With the beginning of the short rains in late October, the migration makes its way back into the Serengeti – which makes it the perfect time of year to be anywhere in the northern part of the National Park. By December, having emerged from the northern woodlands, the herds then return to their calving grounds in the south once again and the circle is complete.

Of course, rain is the greatest motivator underpinning the annual migration and largely dictates where the herds can be found at any given time. For example from July to October is generally the optimal time to catch it in Kenya, although unusually dry conditions in the southern Serengeti have encouraged the animals to head north far earlier than usual this year, with hundreds of thousands of wildebeest arriving in the central areas of the Serengeti from as early as March. 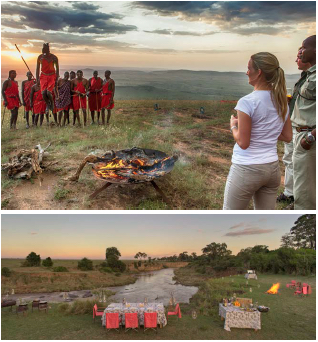 The rainy season runs from October to May and typically begins with the short rains – a period of gloriously hot sunny days punctuated by brief torrential thunderstorms, before peaking with the long rains of April – a month to avoid. Some years are a little different when significant lack of rain forces herds to leave their breeding grounds much earlier than usual. Lying in wait for them – the notorious Grumeti River crocodiles, which exact a high toll as wildebeest traversed the river’s still high waters.

Zebras are often the first animals to arrive in Kenya, grazing on the tall grasses, with wildebeest not far behind them. Here they remain from July to October – the main tourist season – when visitors flock to watch dramatic river crossings.

But as soon as the rains return the wildebeest head back to the Serengeti, drawn towards their calving grounds in the south of the Park. In the dry season there are few animals to be found here, but between January and March, during calving season, surely nowhere in Africa feels so alive. 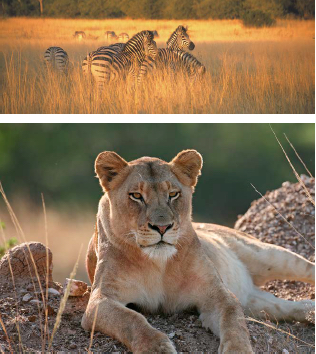 New Orleans : Top 5 Things To Do