Bypassed by Not Forgotten 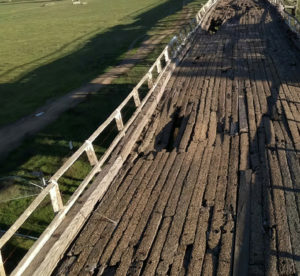 America has Route 66 and Australia has Route 31. Also known as the Hume Highway, it’s arguably Australia’s most important and historic thoroughfare and has been a work-in-progress for 200 years.

Many Australian road-trippers with the grey evidence of years will recall the Old Hume Highway (OHH) with a mixture of vague nostalgia and pure disgust. When I started solo interstate drives in my little Ford Escort back in the early ‘80s, battling the Hume was not something to look forward to. Narrow, twisty and in shamefully decrepit condition, I still shiver at the memory of several close calls.

In August 2013, the $250m Holbrook bypass signalled the final act of duplication and now we have the dubious pleasure of driving or riding from Sydney to Melbourne without having to bother any of those poor people in Holbrook, Yass, Gundagai or Albury.

Without denying the convenience and safety of the slick new bitumen, it has removed the arousal of discovery one usually seeks on a leisurely road trip. But fear not, there is hope.

Even though it seems like it’s been there forever, the Hume Highway has only officially existed since it was named in 1928, just two years after the USA’s own Route 66, although the Hume didn’t get its numerical ‘31’ guernsey until the 1950s.

Prior to its modern life as the Hume Highway, a hotch-potch of roads, tracks and trails existed between Sydney and Melbourne, beginning with those carved out by the namesake explorer, Parramatta-born Hamilton Hume and his English sidekick, Bill Hovell. The two didn’t get on that well but still managed to stick it out from Sydney to Port Phillip and back in 1824.

Things picked up rapidly after the odd couple returned with the news of favourable pastures to the  southwest of Sydney which spurred on road-building big time, driven by then Governor Lachlan Macquarie, who was keen to kick the colony along. The ‘Great South Road’ (GSR) was born and gradually evolved into a more-or-less continuous set of thoroughfares that joined Sydney to Melbourne after the southern capital was proclaimed in 1835.

Goldrushes in the 1850s and the rise of coach travel like that of Cobb & Co., further underscored the need for better roads even though this development was delayed by the more comfortable rail, and later air, options.

Inns, hotels, stables and service depots popped up along the route and many of these fascinating old staging posts can still be seen on the backroads where the early Hume and Great South Roads once wound through the bush. Remote roads also spurned a new industry…bushranging.

Now, with most of the towns and villages bypassed, the great challenge today is to experience as much of the old routes and as little of the bland motorway as possible, visiting the little hamlets and rural centres which once rumbled to the sounds of 18-wheelers all through the night.

On the way to the NSW Southern Highlands, you can explore the old route through Narellan, Camden and Picton, picking up portions of old Route 31 as well as The Great South Road.

Out of Camden, pick either the Old Hume Highway which retraces the route past the historic truckers blockade of 1979, or venture a click to the west to the convict-built Old Razorback Road which was itself bypassed in the 1930s. Now that’s a wild ride!

It’s easy to linger here in the region roughly bounded by Robertson,

Moss Vale, Bowral and Berrima, with its wineries, gourmet produce and scenic roads. Every June is the Pie Festival but that shouldn’t be your excuse to only visit once a year.

The Old South Road is a great bypass that will take you through Moss Vale to Sutton Forest if you’d rather keep going, or swing west at Alpine and roll through to Berrima on the OHH.

If you don’t mind a bit of unsealed, follow Canyonleigh Road out through Brayton and Towrang along the old GSR and dawdle into Goulburn where a bonanza of bypassed attractions await, like the ‘Aladdin’s Cave’ of books and old wares at the Argyle Emporium in the old police station. Check in to the visitor centre near the train station to see what’s open, but note the Railway Heritage Centre and old brewery are closed.

At Breadalbane ditch the freeway and head along the OHH through Cullerin to Gunning where an even older route will take you through Ben Hall territory via Mutmutbilly. Settled in 1821, Gunning was already happening when H&H set off south.

There are lots of old segments of the highway running parallel to the motorway that can be explored but do so carefully as many segments are now divided by gates and grids.

After a glance at the rusting relics at Robinson’s of Bookham, make a point of stopping in at Jugiong, one of the smaller towns bypassed in 1995 but refusing to lay down and die. The Sir George Hotel, Jugiong Wine Cellar and Long Track Pantry are highlights of any Hume journey and are enormously popular with trailer-toting nomads and day-trippers alike.

8 – PAT THE DOG AT GUNDAGAI

A gorgeous old main street with true country charm, Gundagai was bypassed back in 1977 when the big Sheahan Bridge relieved the poor old wooden viaduct that carried everything for 80 years prior. If you drove across that bridge back in the day, take a bow. The lolly shop at the Tuckerbox is a bit of a misnomer, because you can get fabulous produce from all across the locality.

If you head out of Gundagai, through Tumblong and detour via Mundarlo (Junee turnoff) you’ll get a taste of how folks travelled way back in the day. It’s mostly unsealed. When you cross the Sturt Highway, you’ll find the excellent Borambola Winery.

Holbrook was the last town to be bypassed in 2013 but retains certain notoriety for having an Oberon-class submarine (the former HMAS Otway) and museum smack in the middle of town. 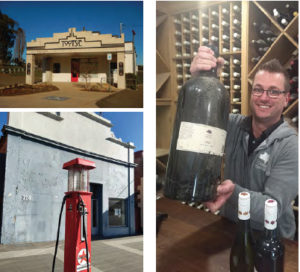 We finish our NSW sector at the twin towns of Albury-Wodonga where there is plenty to see and do.

“Anyone who has driven the old Hume, meandering from town to town, cruising down their main streets, winding around hills, ducking under and over railway lines will know its glorious secret – it was never a highway except in name. Rather, it linked inland cities, towns, villages, hamlets and dots on maps – for the early roads went not where they should, but only where they could.”  (Peter FitzSimons 2013)