Three artful bruises decorate my ‘sit-bones’. Cycling around Norfolk Island isn’t the most strenuous activity I’ve ever undertaken, but the potholes from the recent rain turned my e-bike tour into more of a mountain bike ride.

It’s only 13 kilometres on a paved road, made even easier with the aid of electrics, but it gives me a chance to learn the lay of the land while getting a bit of exercise and soaking up Norfolk Island’s mix of country and seaside air.

My tour guide, Kevin Mulholland, has been living on Norfolk Island since 2011 and runs the local gym. Eighteen months ago he bought some e-bikes from Australia and now runs guided tours. “It’s not everyone’s cup of tea, but it adds a fitness element,” Kevin explains. He’s had young couples in their 20’s jump on the bikes, and his oldest rider was an 80-year-old from Australia.

At this point I’d like to address the elephant in the room – Norfolk’s unfortunate reputation as a destination for the newlyweds or the nearly dead!

Naturally, no one on Norfolk wants to say that too loudly and I’m jokingly silenced when I mention it. But it’s easy to see why it appeals to an older generation. The climate is comfortable without the stifling humidity of other Pacific Islands, it’s so safe everyone leaves their cars unlocked and keys in the ignition, it has a rich history and generally feels familiar, with a hint of country charm.

But I’m neither a newlywed nor nearly dead and I’m determined to see Norfolk Island through a slightly adventurous 30-something-year-old’s eyes.

Starting with the e-bike tour, I ride past the St. Barnabas Chapel, finished in 1880 and marked by a stunning rose window. Kevin gives a casual history of the different landmarks, while sharing stories of his observations on Norfolk.

We ride past a dramatic seascape of the ominously named Headstone Reserve and through gigantic Moreton Bay fig trees at 100 Acres Reserve – which looks just as delightful as the 100 Acre Wood from Winnie the Pooh.

On the straights, I test out my electric gears and clock a top speed of 34 kilometres an hour. By the end of the one-hour tour I’ve journeyed from rural to seaside and I’d be happy to ride for longer – if it weren’t for my derriere suffering the effects of bouncing over multiple potholes at speed.

Fortunately, there are plenty of places to explore on foot. Norfolk Island National Park is dense with diverse flora and fauna, and is home to nearly 200 native plants, some of which are only found in Norfolk Island. The park has eight kilometres of trails, but it’s the stop-you-in-your-tracks cliffside views that turn my walk into a lengthy expedition.

The expanse of the ocean is so vast, I swear I can see the curvature of the earth. Incredible natural sculptures rise dramatically from the ocean, with names like Bird Rock and Elephant Rock. At the right angle on the incoming tide, you understand how they are named.

It’s a bit too cold during my stay for swimming and snorkelling, but I join a glass bottom boat ride at the picturesque Emily Bay lagoon. This calm, golden-sand bay is protected by a reef, making it safe for swimming and the coral bommies in the lagoon provide plenty of marine life for snorkelling. I’m excited to hear a scuba diving operator is opening up on the island too.

Locals call Norfolk Island the quiet achiever of the region – often overlooked by those who prefer a more classic beachside resort holiday. There’s something nice about it being overlooked though, as it retains its simple charm and trust in the people who come to visit.

It wouldn’t be right to visit Norfolk Island without a dip into its morbid history. There’s no mincing the brutality of the past as home to two penal settlements, the first dating back to 1788. Psychics say it’s one of the most haunted islands in the world. 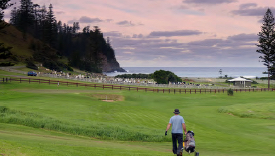 Reluctantly, I’m taken on a nighttime ghost tour through the ruins, hearing tales of the island’s bloody and cruel past and its lingering ‘residents’.

“Now does anyone want to go for a walk through the cemetery?” our ghost tour host asks. I let out a loud “NO”. But everyone else in the group is keen. “You can stay behind in the van if you prefer?” Alone in a van in one of the most haunted islands in the world? No thanks. I take my chances and join the group in the graveyard, the waves of Cemetery Bay beach roaring in the background.

As we move through the convict cemetery, marked by four pillars, my unease is replaced with an overwhelming sense of wanting to say “I’m so sorry” to some of the headstones. Young children, young men, babies, women. “I’m so sorry this happened to you.” I’m not going to lie, I’m relieved to get back into the van at the end, but realise it’s important to acknowledge those who had lost their lives here.

I conclude my trip with a yoga class to release the muscles, still tight after my bike ride and the tension from the ghost tour the night before. The sit-me-down bruises take a few more days to ease. I think about when I can return to Norfolk Island and make a mental note to bring padded bike shorts next time.

Three of the best carry-on suitcases