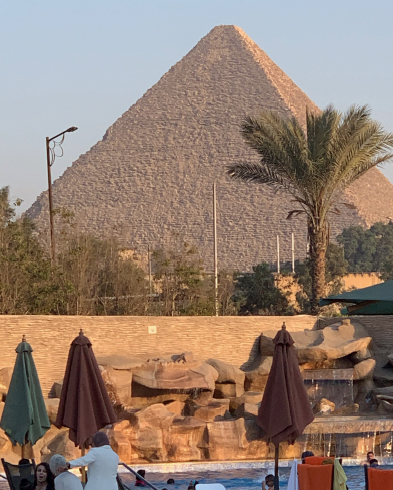 With almost 30 years between my last visit to Egypt and the one I was about to embark on, I was like a kid on Christmas Eve before departing for my On The Go Tours ‘Jewel of the Nile’ excursion. Impatient, excited and oblivious to anything anyone was saying around me, all I could think about was history and once again, walking with Egyptians.

As fate would have it I was doing almost exactly the same tour as I did back in 1990. If you’re old enough to remember, this was a mere two months before the US and its allies kicked Saddam Hussein’s backside out of Kuwait. You can imagine the tension in the region at the time. Yes, Egypt was on ‘our side’ but this was a region divided back then…to some extent it still is.

But the main thing is, like then, the majority of Egyptians just want the tourists to come back…and coming back they are. Since the new government came to power your ‘average Egyptian’ has been able to witness the increase in spending on vital infrastructure, which has been poorly ‘managed’ for many years.

As I arrived off my Etihad flight at Cairo International Airport, I was greeted with a smile and a welcoming handshake by my On The Go Tours representative. I’m not usually one for group tours but I wanted to see what the ‘new’ Egypt had to offer and this is by far the best way to experience that.

My accommodation for the first couple of nights was at the luxurious Le Meridian Pyramids Resort & Spa. As you can tell from my photos, its proximity to the Great Pyramids of Giza is remarkably close…and this was our first destination the following morning once all my travel ‘buddies’ had arrived.

My lasting memory of Giza 30 years ago was that it was somewhat of a hike from central Cairo to get there. Today, the city almost envelops the last remaining of the Seven Wonders Of The Ancient World. Cairo’s population has ballooned out to well in excess of 25 million and accounts for 1/5th of the country’s people.

The government controls a lot of the country with the likes of the exchange rate fixed, and entrance to historic sites closely monitored. Wherever you go you can be guaranteed the same exchange rate (currently about 10 EGP to 1 NZD). It is best to take US$ with you as these are readily exchangeable in many places, and it is safer, shall we say, than flapping your credit card all over the place. Not so much at nice hotels and restaurants but I still have concerns about the marketplaces.

On the 1st August this year the government relaxed photography laws at all of the major tourist sites. If you have a large digital camera there are still places where you may be asked to pay a photography fee, but using your cell phone is completely fine at all major locations.

The fees can vary between EGP 100 for Hatshepsut’s temple (which is close to the Valley of the Kings and not a place I would waste my time on if I ever went back again), to the jewel in the crown of Egyptian tourism…King Tutankhamun’s tomb (EGP 250).

The number of people able to visit some of these places are often limited daily, especially in The Valley of The Kings, where your ticket (EGP 200) will allow you entrance to three tombs. They change the tombs available to the public each day, so as not to have too big an impact on the historic sites. Did I say “Historic”? I meant “World Heritage Sites”. (King Tut’s tomb is a totally separate entrance fee)

Whilst I wandered around the Great Pyramid of Giza (the resting place of the 4th dynasty pharaoh Khufu), The Sphinx and the other two pyramids that make up this World Heritage Site, I can’t help but stand in awe about how precise the measurements to design and build these wonders were.

I mean, how can people who lived over 4,500 years ago build such structures that still remain, mainly, intact today…yet university degrees these days can’t teach engineers how to build a road that doesn’t turn to custard within a year or two?

The Sphinx itself is a wonder to behold, and actually quite a bit smaller than you might imagine. It is dedicated to another 4th dynasty pharaoh, Khafre (Khufu’s son), whose pyramid is the 2nd largest at Giza. It is the one which has remnants of the alabaster covering at the top of it.

Side-by-side the three pyramids form one of the most iconic images anywhere around the globe, and is the resting place of three generations of 4th century pharaohs that ruled, at the time, the greatest country in the world.

As the temperature starts to climb we board our air-conditioned bus and head to the site of the world’s oldest pyramid, the famous step Pyramid at Saqqara, about 30 kms south of the city of Cairo.

Designated a UNESCO World Heritage Site in 1979, Saqqara was the resting place for the 3rd dynasty Djoser (or Zoser), and is a completely different design to those that are normally attributed to Egypt. Your EGP 150 entrance ticket will also allow you to visit the Imhotep Museum.

Despite popular belief, because of Hollywood exaggerations that Imhotep was a high priest aligned with Seti 1 (reference the 1999 film ‘The Mummy’), Imhotep was in fact the architect who designed the step pyramid at Saqqara. 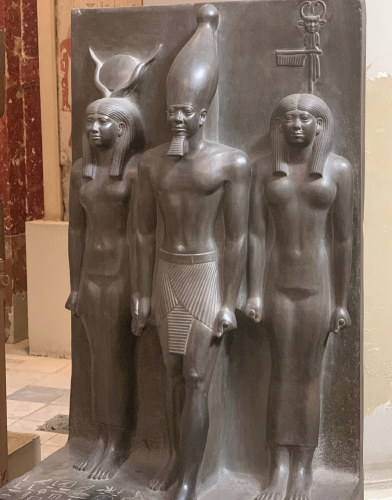 With temperatures now in the high 30s Celsius it was a welcome respite to head indoors to the world famous Egyptian Museum (or Museum of Cairo). But if you want to see the original museum then best you get to Cairo before the middle of next year, because that is when the brand new Grand Egyptian Museum (GEM) will be opening…and from what we saw of the new one – it will be mind blowing.

Also in the Giza region (just two kilometres from the pyramids) the size of this enterprise is staggering. It will house over 50,000 artefacts and the main attraction will be the entire collection of what was discovered by Howard Carter in 1922 in the Tomb of Tutankhamun.

If you have been to the current Cairo Museum you will recall that the room that currently houses King Tut’s exhibition (including his death mask) is actually quite small… not for much longer.

We had time for a swim and to collect our belongings from our hotel before heading to Giza Railway Station for our overnight train south to Luxor. An experience in itself…and one I will continue in our next issue.

The author would like to thank Etihad Airlines for their tremendous service in getting him to Egypt, via Abu Dhabi. (Read about his inflight experience on page 176)

Thanks also go to the tremendous experience provided by On The Go Tours, www.onthegotours.com

5 Ways to Experience the Local Culture When You Travel