Words and images by Tim Roxborogh

Poor old Waikato! Much of the dairy-dominated province is unfashionable when it comes to New Zealanders’ own appraisals of their beautiful country. Probably because when we drive through Waikato it’s at 100kph and we’re always on the way somewhere and somewhere more heralded as a tourist destination.

And nobody holidays in Hamilton! Pop. 180,000. Waikato’s biggest city…frequently made fun of by non-Hamiltonians; actually not bad at all with world-class gardens, an interesting cafe culture and houses people can actually afford to buy!

Though even with the daily bus loads of movie fans visiting the rolling hills and movie sets of Hobbiton near Matamata, not to mention the bonafide tourist hot-spots Rotorua, Taupo and the Waitomo Caves nearby, the notion of making rural Waikato a vacation destination is still not particularly strong. 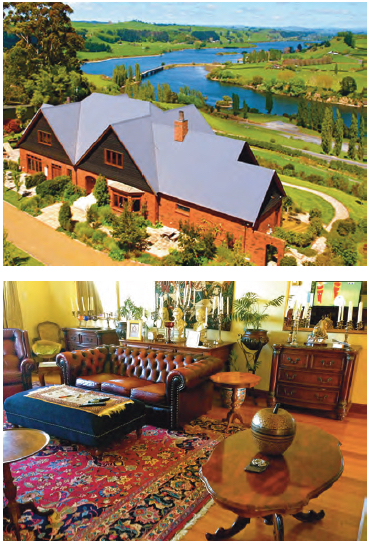 So with an invitation to see a friend living on a horse farm out of Cambridge I thought I’d try and challenge some preconceived ideas. Why not find somewhere to stay in rural Waikato with enough luxury and beauty that it could be a destination in and of itself?

Perched on a hill above Lake Karapiro, about 20 minutes down the highway from Cambridge, I found such a lodge. The highway is one I’ve driven thousands of times and never stopped to think what the view would be like from on high. Turns out very, very nice. Also turns out it’s not just any old lodge.

Lake Karapiro Lodge is a 5-star luxury property run by a lovely couple in their early retirement years named Ann and Eddie. Not that there’s anything “retired” about how they maintain their property, an immaculate Edwardian-style mansion they built themselves just 11 years ago.

I say “just 11 years ago” because the design and fit-out of Lake Karapiro Lodge could leave you fooled into thinking you were being welcomed into an early 20th century country estate. There are sumptuous chesterfield leather couches, candlesticks, polished wooden tables, displayed busts, hand-knitted floor rugs and an attention to detail that shows style and devotion in equal measure.

The curtain fabric, duvets and headboards in the downstairs suites all match and the golden tones were chosen to compliment the colours of the surrounding fields when parched by the summer sun.

The four downstairs suites all have ensuites with attractively tiled floors and sit-down showers with jets from multiple angles. There’s also access to an adjacent drawing room/living room.

Outside are private decks with spectacular views to Karapiro Lake and the Maungatautari eco-sanctuary – a wonderfully conceived community project of fence-protected bush. Looking at the meandering lake against the different shades of green with mountains near and far, it was a picture of Waikato so varied and so unlike what we see as we speed past on the highway.

6Back inside we asked for a tour of the two upstairs suites. Wow. Climbing the stairwell it’s here that Lake Karapiro Lodge elevates itself from being luxurious by New Zealand standards into being something genuinely world-class.

The Sir Tristram Suite and The Versace Suite are approximately double the price of the downstairs rooms ($900 compared to $450 and $550) and are enormous. As in, 95 square metres enormous.

Some very prominent Kiwis have stayed in these suites and when you see their grandiosity, from the size of wooden beds to the golden fittings of the tiered Versace bath, you understand why. It’s clear Ann and Eddie have taste and nowhere does their design veer toward kitsch or clutter. The sum total of the polished floors, the large rugs, the leather couches, the golden-rimmed mirrors and the ornaments like the antique clocks is one of almost royal opulence.

Back downstairs with Ann and Eddie at breakfast and they’re as friendly and unassuming as if they were your old neighbours in the suburbs with the modest 3-bedroom weatherboard home. It seemed incongruous that this thoroughly normal, warm, chatty (Ann) and practical (Eddie) couple could’ve conceived a residence of this kind of rare lavishness. Incongruous, but terrific fun.

Having ticked off luxury accommodation from the Waikato list, it was time to see if Mother Nature is underrated in this part of the country too. Ann and Eddie recommended a place called the Blue Spring, which is part of the Te Waihou Walkway. Accessed from a carpark about 30 minutes from the lodge and close to the small town of Putaruru, this is another part of Waikato that New Zealanders tend to drive past on the way to more ‘famous’ destinations.

That said it was evident from the numbers of families out for a Sunday stroll that people from Waikato know about the Blue Spring. An easy 90 minute walk – some of it boardwalk – took us through farmland and pine and fern-dominated forest. The path follows the river, and as the name suggests, the water is a striking crystalline blue.

More than that, the river is overflowing with plant life of vibrant hues that trail along in the current. The visual of the clear blue water, the green river life and the overhanging ferns was electric. How is it so few Kiwis have heard of this place? Reportedly as much as 70% of New Zealand’s bottled water is sourced from the Blue Spring and it deserves to be more than just a local secret. The Blue Spring was so unique as to be worthy of “destination” status.

Just like that lodge on the hill I’d always driven past.

9 Themes for Your Family Holiday in Australia