It’s hard to imagine that there are still those who believe that 9/11 was all a horrible hoax, even on the streets of New York, and the web is alive with page after page of skeptics. Call it terrorism; call it a conspiracy; call it whatever you like…the fact remains that nearly 3,000 people died on September 11, 2001. It’s also a fact that the events of that day, have changed the way the world thinks, speaks, acts and operates…forever!

When Flight 11 slammed into the North Tower of the World Trade Centre in New York at 8.46am, the earth shook around the Lower Manhattan area. It wasn’t until Flight 175 flew into the South Tower that we began to realise this wasn’t just a simple case of a plane flying off course. As the news spread, we tuned in to radio broadcasts and turned on our televisions.

Today, at Ground Zero, a shining monument stands to honour those who fell on that day. The memorial section of the National September 11 Memorial & Museum opened 10 years later to the day, while the museum section followed in 2014.

The twin reflecting pools, each measuring nearly an acre, feature the largest manmade waterfalls in North America. The pools sit within the footprints of where the Twin Towers once stood. It is rather sobering to walk the perimeter of the pools reading the names of each and every person who died that day. Their names are inscribed into bronze panels edging the pools.

The Memorial’s plaza is home to a grove of Swamp White Oak trees. A Callery pear tree, which has became known as the Survivor Tree, was tended back to life offsite and today stands as a reminder of resilience, survival and rebirth, new limbs extending from gnarled stumps a visible demarcation of the past and present.

The Museum itself covers some 110,000 square feet located within the archeological heart of the World Trade Centre site. Begin by descending the ramp to the original foundation level to the main exhibition space, past the Survivors’ Stairs down which many fled. At this level you can see the remnants of the structural columns that now delineate the footprints of the original towers.

Spend time in the historical exhibition area that details the events of the day and the aftermath. Artifacts, images, videos, first-person testimonies and real-time audio recordings bring home the human drama. The lives of those lost are commemorated in In Memoriam. Here you can learn more about those who died through family photographs, oral remembrances and selections of personal artifacts. The Wall of Faces communicates the scale of human loss.

As a travel writer who seeks out the fun aspects of cities around the world, I don’t often go in search of stories surrounding tragic events, particularly downed aircraft. After all, they’re my main means of getting to and from the wonderful sights I see. However, if you’re headed to New York, this is one tragic event I encourage you all to have a part in. Head to the memorial, sit awhile, open your ears and eyes…and your heart. No matter what you believe actually took place on that eventful day, you can’t help but be moved by the scale of the destruction – the single greatest loss of rescue personnel in American history, and the largest loss of life from a foreign attack on American soil. 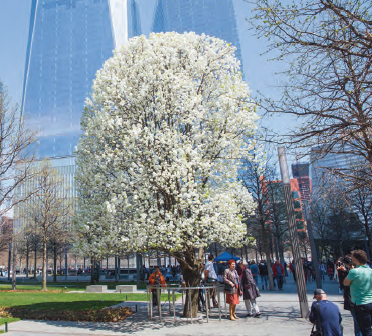 We travelled with Hawaiian Airlines, who offer a one-stop connection in Honolulu when travelling between Auckland and New York. www.hawaiianairlines.co.nz

THE WAR ON TERROR BEGINS:

“Today, our fellow citizens, our way of life our very freedom came under attack in a series of deliberate and deadly terrorist acts.

The victims were in airplanes or in their offices…secretaries, businessmen and women, military and federal workers. Moms and dads. Friends and neighbours.

Thousands of lives were suddenly ended by evil; despicable acts of terror. The pictures of airplanes flying into buildings, fires burning, huge structures collapsing, have filled us with disbelief, terrible sadness and a quiet, unyielding anger.

These acts of mass murder were intended to frighten our nation into chaos and retreat.

But they have failed. Our country is strong. A great people has been moved to defend a great nation.”

Endangered animals in Africa and where to spot them